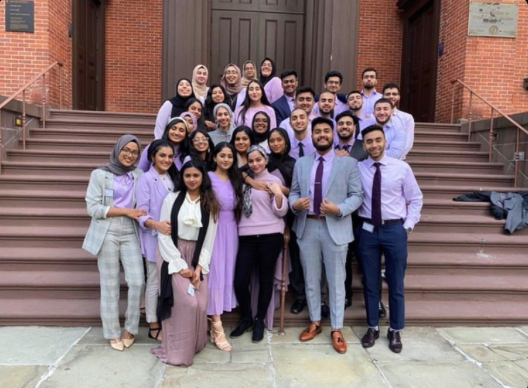 The weekend of Jan. 25, 2020 marked the St. John’s Muslim Student Association’s (MSA) remarkable victory in the New York MSA Showdown hosted at NYU Tandon in Brooklyn. Participants based their submissions on the theme “Breaking Barriers: Daring to Dream,” as they went on to compete for their first title.

Muslim college students in America often face challenges that burden them with their own identity. The theme for the competition was enlisted as a way to share obstacles Muslim students generally face in regards to their race, religion and class by using their creative abilities to showcase their personal journeys of overcoming those obstacles.

The MSA Showdown provides a collaborative space for MSA’s at universities along the east coast to showcase their talent, incorporating such a profound theme in various categories that included photography, Quran, product development, social justice campaign pitch, stand-up comedy, a fashion collection and short film, as well as several other categories. This weekend-long event allowed participants to attend various speeches, watch multiple competitions and gather around to learn more about Islam and the overall management between being a full-time student and a Muslim.

The MSA Showdown serves as a platform for all Muslim college students to emulate the unity of the religion by means of celebration and connection within brotherhood and sisterhood. It was created in hopes of utilizing the support between students for the purposes of building each other up while discovering and sharing talents and skills worth noting.

MSA Showdown winners of each category are granted prizes that effectively enhance creative skills in accordance with their respective wins. Winners of the short film category have the opportunity to be advised by chairman Sikandar Atiq of The Mosquers Film Festival, widely known to host international film festivals dedicated to educate and entertain audiences about the Muslim experience. Winners for 2D art, creative writing and photography will have their work published in Aftab Magazine, a literary outlet for the voices of Muslims and minorities. Stand-up Comedy, Brothers Nasheed and Spoken Word winners will get to perform at the Performing Arts Mosaic. Fashion Collection winners will have the opportunity to meet with CEO Melanie Al Turk of Haute Hijab, a renowned Muslim Fashion company. Winners of the Sister Nasheed category will have an opportunity to have a one-on-one mentoring session with New Jersey based hip-hop artist Boshia Rae-Jean.

The St. John’s MSA Community Service Chair Nusrat Nasir explained her experience at the NY MSA Showdown: “Being a part of the St. John’s Ummah team for NY MSA Showdown was one of the most incredible and developing experiences. It led me to tap into my creativity that I did not realize I had before. The passion, the laughter and the immense energy from our team (fondly known as Johnnies) are qualities I will always cherish. The people who comprise this team are truly irreplaceable.”