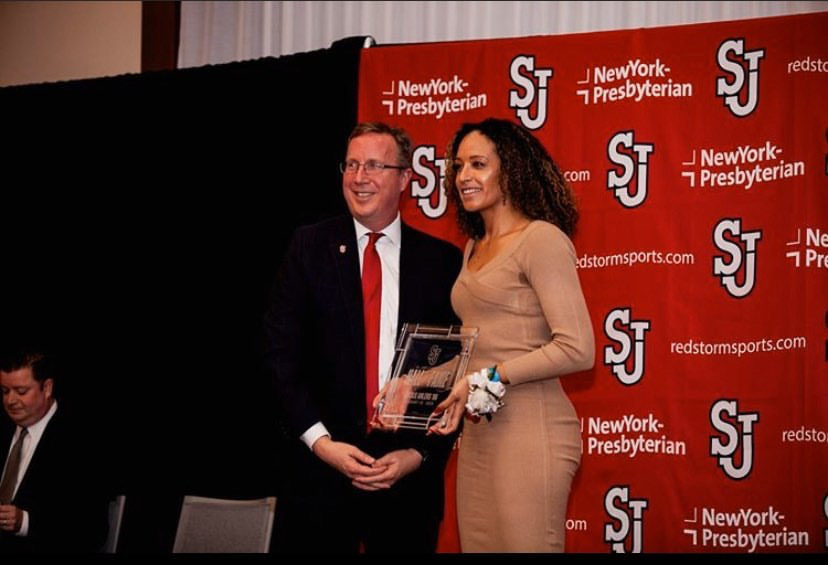 Jacqueline Ahlers: mother of three, D1 student-athlete, head coach at Pace University and recent St. John’s Hall of Fame inductee. Ahlers was honored the weekend of Jan. 19, but the real honor is beneath the surface at her time at St. John’s.

Jacqueline Ahlers played on the St. John’s Volleyball team from 2002 to 2005. Her love for the sport grew not only from being on the court but from the environment that surrounded her off the court as well.

“It wasn’t just, I was there for four years and that’s it … we are always a part of the St. John’s family,” Ahlers said.

While Ahlers is now a mother of three children, she had her first child during her junior year at St. John’s. Her resilience and determination led her to not only graduate from college in four years but finish her last eligible college season at Stony Brook University.

“From the academic department to the trainers [they] were just super helpful in allowing me to know it was something they would support because they knew how much work I put on and off the court,” Ahlers said. “I don’t think I could have done it at any other school.”

While Ahlers considers herself a humble player, she said it was nice to “not be humble for a second, ” and to enjoy knowing she is “apart of the greats of St. John’s Athletics.” However, the most rewarding moment was having her son present. Ahlers loves knowing she can be the example for her son to look up to while he pursues his athletic dreams.

Ahlers’s oldest son was in attendance at the induction and was able to experience the full-circle journey. While she was expecting, the St. John’s community was always in full support of her pregnancy. “It is tough in general to be a young mom, but to have support from the whole school behind you was just one of the greatest things ever.”

After her son was born, Ahlers finished her last year in college – during this time academic advisors would watch her son when she went to school, and even once had a professor that allowed her to bring him to class.

Volleyball is still at the core of Ahlers’s life. She has coached at Georgetown University and currently coaches at Pace University, while also coaching private lessons and travel teams, something she has done since college in her spare time. For Ahlers, it is an amazing feeling to be able to be a mentor and friend to her players. She looked up to her own coach, Joanne Persico, at St. John’s and is glad to be in that same position now.

“For them to say ‘coach did you see that, I got that,’ something so small … it is the most rewarding [thing] knowing that you helped them get to that excitement.”

“Seeing that they can trust me and be comfortable with an open-door policy or coming to me and telling me what happened at school or in life is so important and rewarding.”

The bond made between Coach Persico, Ahlers and her teammates during her college season did not break over the years. The two coaches still talk, and even compete: “When I was at Georgetown last year, we were each other’s first Big East match so that was kind of surreal to be able to coach against each other.”

Ahlers can still recall how there was always a supportive dynamic between her St. John’s team. Ahlers recalled this dynamic in a particular game in which she achieved a record-breaking number of kills. “My teammates were pushing me … they wanted me to get to that point as well. Throughout the game I remember them telling me, ‘okay you are 10 away, you are 5 away.’ It was just like that anxiety, but the good anxiety to push through.”

Ahlers felt all the love and support from old teammates, coaches and faculty all over again on the night of her commemoration. She is thankful for her time spent at St. John’s and whether it is through an alumni game or a chat with the current volleyball players, she still stays connected in the community.

“If I wasn’t on the volleyball team, I don’t know if I could’ve been a normal college student.”