Students Weigh in on their Time at Home 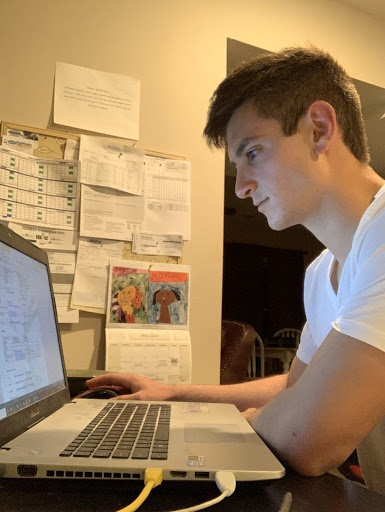 As  the semester comes to a close, several St. John’s students have taken the time to weigh-in on what heading home early and moving to an online class format has been like for them. With the abrupt end to in-person classes, students were forced to adjust quickly to this new method of learning. Each student has had a different experience in nearly every aspect of the transition – from how they adjusted to online classes, dealt with their professors and possible differences in time zone to how they spent their free-time or kept in touch with their friends.

Ashley Narine, a sophomore history and government and politics double major, was expecting  the adjustment to online classes to  be easy, having taken some courses online before, but found herself unfortunately surprised by the difficulty of this new reality. “There were some professors who basically tripled their workload and said we are home so there should be no complaints. Then I had one professor who I haven’t heard from in three weeks,” Narine said. “Overall, my online classes lacked consistency and I felt as if the professors weren’t prepared or did not take into account how their students’ lives are being affected by this pandemic.”

Many students seemed to share Narine’s opinion that the combination of adjusting to online classes and trying to keep in touch with professors was difficult, including sophomore Kristin Camacho, an English major with minors in public relations and musical theater. “Some people are really well-suited for online classes and I am not one of those people,” Camacho explained. “I have a hard time keeping up with deadlines and motivating myself to participate. Also, I’m from Southern California and the time difference is three hours, which doesn’t seem like much until your professor wants to meet at 10 and you have to drag yourself out of bed at seven.”

However, there are students who ended up realizing that they loved online classes, such as Emma Neuville-Taylor, a junior business major. “I think they are easier because it’s straightforward and I can work at my own pace. In many ‘in-person classes’ I have trouble taking notes and most of the time the materials are irrelevant to the tests. Online allows me to have straightforward information I know I will be tested on,” Neuville-Taylor said.

As for students returning from abroad, the adjustment was a bit more difficult. “The biggest issue was taking classes like art that were based off of the location I was at,” Ryan Vent, a junior business analytics student who was studying abroad through the Western European Semester program earlier in the semester, said. “[In] my art class in Ireland we were supposed to go on site visits and then draw/sketch the different architecture we saw, so not being able to do that since the classes were online made for a fairly difficult class.”

The switch to online classes was a huge change for both students and professors. While some professors appeared to be helpful in terms of accommodating their students, others unfortunately fell short.

“I was overwhelmed by how supportive and accommodating my professors were,” Camacho said. “I immediately fell behind in my classes. After I began to adjust to being home and my new circumstances, I reached out to my professors apologizing for my absence and promising to get my work in, hoping only for half credit on all assignments missed. Everyone was so understanding and not only helped me catch up academically, but also took a genuine interest in my health and well-being.”

Even professors that are overseas seemed to be very accomodating, according to Vent. “My professors, though in different countries, have been super accommodating. Even with the time difference they have responded to my emails and questions very quickly and have been very flexible,” Vent shared.

While most students’ comments regarding their professor’s accommodations have been positive, sophomore Emily Miller explained that some of her professors have not been the most accommodating during these tough times. “There are certain subjects in school that are just harder for me to learn than others. Math, for example, is definitely very challenging to learn just online. We have homework assigned every so often, and this professor did not give us any lesson to look off of or any videos to reference while doing our homework,” Miller explained. “I tried to reach out, but nothing seemed helpful besides actually being in the classroom and learning the material.”

The one thing that most students can agree on, however, is that the extended pass/fail option — regardless of whether or not it was used — was beneficial to have. “It gives me more peace of mind knowing that my GPA might not have to suffer in case I don’t do as well as expected in my classes,” Jason Nikolatos, a sophomore homeland security and military leadership major, said.

The pass/fail option was extended to allow students to pass/fail any course, including major and minor courses, with a new decision deadline of May 6, instead of April 17 .

“I think that the pass fail option lifted a lot of weight off of everyone’s shoulders. I think it helped a lot of people and it may even help me if I decide to use it or not,” Miller, a marketing major, said. “This is definitely something that I think us students really needed during these times.”

“I’ve been keeping busy by going on walks outside, exercising, doing puzzles, reading and making crafts,” Neuville-Taylor shared. “I am also teaching myself Spanish from Duolingo so hopefully after this quarantine I’ll be a little smarter!”

On how he’s been keeping busy, Nikolatos said, “I have mostly been keeping busy by exercising and preparing myself for the fall semester since I intend to come back stronger and more prepared and not to mention excited for when I come back to campus.”

Living at home and taking online classes — especially on such short notice — was a huge adjustment for everyone, but students learned to make the best of a bad situation.

“The worst part of being sent home mid-semester was feeling like I was being deprived of learning and the experience that I normally have attending class and being on campus in-person — I felt like I wasn’t making as much progress as normal for me,” Nikolatos added.

“The best part about being sent home at the time was the break just before midterm week,” he continued. “However, looking back on it now, I would’ve preferred to be there.”