Students make their voices heard on the upcoming election 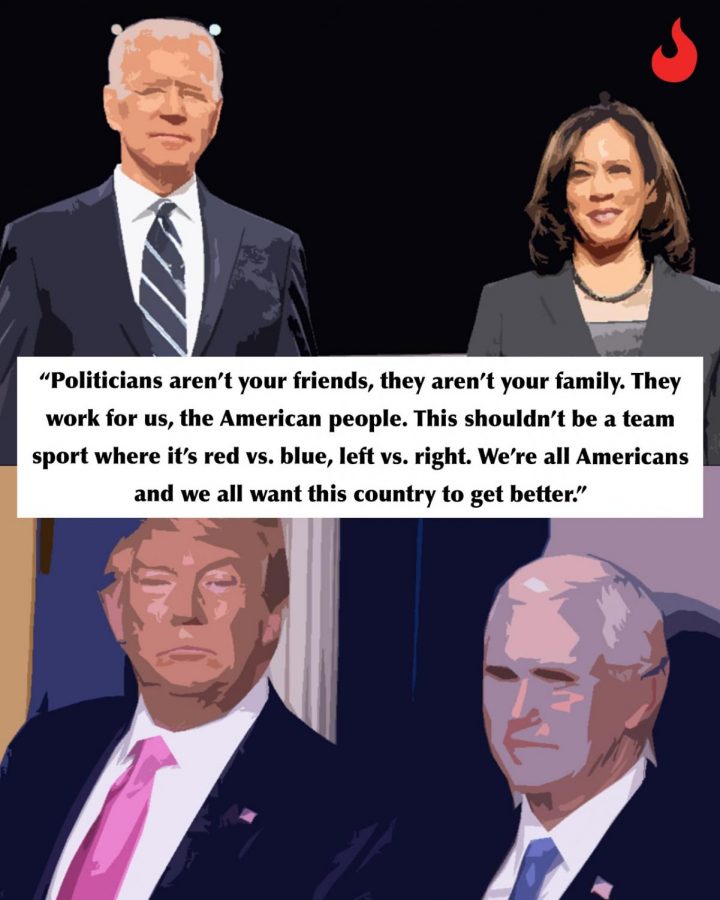 During this unprecedented time, election results will very likely not be confirmed on election night, the time we normally find out who will become the next President of the United States. As the Presidential race is in its final stretch, the Torch asked students to weigh in on all things for the 2020 election.

Each Presidential candidate this year has their own policies and ideas, and in turn each student has their own thoughts on the given candidates: current President Donald Trump and former Vice President Joe Biden.

“I do not agree with Donald Trump’s hateful rhetoric nor his conservative policies.,” Sulai Malpica, a junior History major and economics minor who voted early for the Biden/Harris ticket, said. “I do believe that Joe Biden is the best candidate, however, because we need someone who will take control of the COVID-19 situation in the USA, someone who will take climate change seriously, and someone who does not play both sides of the spectrum when it comes to racism.”

Danny Giangrande, a fifth-year sports management major, agreed with Malpica in the sense that they believe Biden is the better choice for President over Trump.

“I like Biden well enough as a person,” Giangrande said. “He’s not perfect, but no one is, and I think he has handled his campaign with class from the start, which I appreciate. Politically, I’m progressive … but I’m also pragmatic and know that four more years of Trump would be far worse for progressive policies than four years of Biden.”

“With Trump, he’s a right-wing populist so there’s very little I agree with on paper with him,” Giangrande continued. “Even if I did agree with most of his policies, I could never look past his character.”

“I think that this might be one of the most important elections coming up, it seems like a lot of important decisions are likely to be decided in the next four years,” Nikolatos said. “When it comes to the candidates themselves, I think Joe Biden is a great politician and will probably lead the same way he did when he was vice president under Obama. Trump on the other hand is not a great politician and I think that’s what a lot of people love about him.”

Junior marketing major Jenni MacIntyre also agreed with everyone else that Biden would be the better pick for president.

“I am not a fan of Trump, never have been. I stand with Biden’s viewpoint on many social and political issues,” MacIntyre said. “I think Biden will win, people are sick of the issues with Trump’s presidency and administration. I don’t see him winning another term.”

While many students seemed to agree that Biden would make a better president over Trump, there is some disagreement regarding who will actually win this election. Nikolatos believes there will be a repeat of the 2016 election and Trump will pull out a win, keeping him in the White House for another four years.

“I think a lot of people do not trust that Joe Biden is as sharp as he used to be,” Nikolatos said. “Additionally, Biden‘s vice president pick is largely unpopular among undecided Republicans and even many Democrats.”

“On the other hand,” Nikolatos continued, “I think Trump will win the election, not because Biden is the worst choice but because …  [people] are largely happy with the way he has brought back patriotism in this country along with his handling of the economy and bringing jobs back into this country.

Malpica seemed a little more uncertain when it comes to who will win this Presidential race, though she said she ultimately hopes “that Joe Biden wins the presidency.”

“However, like we saw with the 2016 presidential election, we must show up in unprecedented numbers in order for that to happen,” Malpica continued. “Seeing how many millions of people have voted early gives me hope that we can elect the right candidate, Joe Biden, this time.”

Giangrande believes that Biden will win the Presidential race this year.

“I think Biden will win. People are energized in a way that they weren’t four years ago. People really didn’t like Hillary, and I say that as someone who voted for her. Biden is a much more likeable person than Hillary,” Giangrande said.

“There is also the fact that Trump only won in 2016 by a total of about 80,000 votes spread across a handful of key swing states, states that are now largely leaning Biden. A not-insignificant number of people who voted for him in 2016 won’t vote for him again.”

According to the New York Times, Biden is ahead in four swing states, Wisconsin, Pennsylvania, Florida and Azizona.

Regardless of who wins this Presidential race, there is concern surrounding the aftermath of the election in terms of  both candidates’ and voters’ reactions to who becomes the next President of the United States.

“I worry that if Trump wins, the riots we have seen since the death of George Floyd will become more violent and more destructive,” Nikolatos said. “On the other hand, if Biden wins I worry that he will enforce the shut down for the pandemic which would ultimately destroy our economy and especially the lives of many hard-working individuals especially those who owned small businesses.”

Malpica also has concerns regardless of which candidate wins.

“If Trump is re-elected, I fear that there will be irreparable damage done to the country,” Malpica said. “During the first four years of Donald Trump’s administration, we have already seen his reluctance to denounce white supremacists … the blatant disregard of human rights in this Administration’s handling of things at the border with Mexico, and in their Muslim Ban.”

“If Biden wins, I fear that some of the far-right groups will incite violence, as they have already shown their willingness to do,” Malpica continued.

It is possible that the weeks following the election will be full of uncertainty, as it may take some time until all of the ballots are officially counted. The New York Times breaks down when full results from each state can be expected to be counted – in New York alone it is expected that Absentee ballots will be reported in the days and even weeks following Election Day, although unofficial results could be in the night of.

“Since it will be days before the votes are all counted due to absentee [ballots], I think the whole next week will be confusing in the media,” MacIntyre said. “I bet Trump will say the election was fraudulent if he does not win.”

Taking a step away from the candidates themselves, many students can agree that voter suppression has become a huge issue in this election.

“Voter suppression is a real issue in this country,” Giangrande said. “It’s not just a red state issue either, New York City has been having a lot of issues with hours-long lines at polling places,” Giangrande continued. “I don’t care if you don’t share my political views, you are still entitled to the right to vote and share your opinion, that’s what America is supposed to be about.”

Malpica agreed that voter suppression is a huge problem during any election, but especially this one.

“The Trump administration has consistently downplayed the COVID-19 pandemic, despite the death of over 200,000 Americans, and has sought to dismiss safe avenues for voting based on toxic misinformation,” Malpica said.

“The most horrifying example of voter suppression that I saw was in Harris County Texas, home to millions of voters, when the republican governor, Greg Abbot, closed many ballot drop-off locations,” Malpica said.

“This was a clear move to try and suppress the voices of millions of voters, but thankfully, this seems to only have encouraged voters to go out and vote. This gives me faith that despite curve balls and sneaky eleventh hour decisions, Americans are going to make certain that their voices are heard in this election,” she continued.

Many students are making their voices heard throughout this election and getting out to vote — a pattern that will hopefully hold true in the future and encourage their fellow students to get and vote every election, even local elections. Pre-election analyses have found that more young people of a history of voting now than they did in 2016, according to CNN.

“We can’t only vote this year and rest on our laurels. We need to vote in the midterm elections as well, and do your research on down-ballot candidates too. We need to hold our elected officials accountable,” Giangrande said. “Politicians aren’t your friends, they aren’t your family. They work for us, the American people. This shouldn’t be a team sport where it’s red vs. blue, left vs. right. We’re all Americans and we all want this country to get better.”