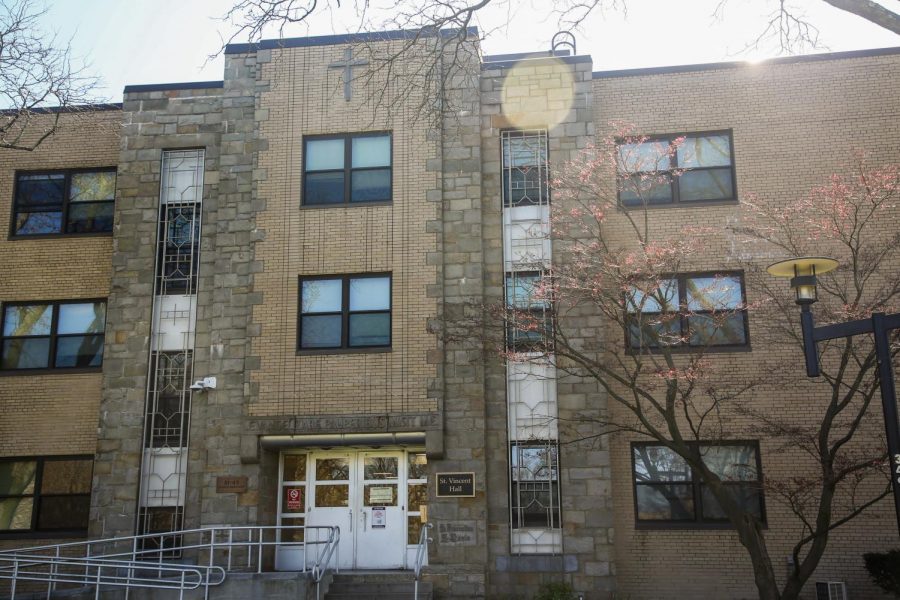 St. Vincent's has been the common housing for Ozanam Scholars.

Like many organizations on campus, students and faculty involved with the St. John’s University’s Ozanam Scholars Program have faced many challenges due to COVID-19 in the past year.

The Ozanam Scholars Program selects around 25 incoming freshmen each year to participate in this four-year program, granting an annual scholarship of up to $10,000 to these students. In turn, the program provides them with a platform to “critically examine the systems that perpetuate poverty and take action to advance social justice through academic scholarship, Vincentian service, and global citizenship,” according to the St. John’s University website.

The program encompasses areas of community service and travel, and includes the creation and completion of a capstone project, but the pandemic has altered nearly every aspect of the program.

“The Ozanam Scholars program really thrives on connection,” Carline Bennett, director of the Ozanam Scholars Program, told the Torch in a Zoom interview last month. “Connection with community members. With faculty. With our partners. And most of all with students and their fellow scholars in the program… I think what the pandemic has done, not just for Ozanam, but people all over, is strain those connections.”

“It’s definitely been harder to connect with my fellow scholars,” she said. “Talking to a screen is not exactly helpful when you need to form relationships for the next four years.”

Basso pointed out how the pandemic has affected her outreach efforts as well.

“When you’re serving, you really need to be able to connect to make a big impact,” she said.

Last semester, most of Basso’s service hours were from an organization based in California and noted that the distance, time difference and the virtual format made communication difficult.

One of the main components that has been heavily affected by pandemic restrictions is travel. As a cohort, scholars typically go on multiple trips per year, but many of them have been canceled. Students in the sophomore cohort weren’t able to study abroad in Paris and Rome, and their Washington, D.C. and Puerto Rico trips were both canceled. Bennett agreed that these trips are typically “where a lot of the bonding happens.”

Along with a passion for social justice issues and a desire to make an impact on local communities, sophomore Sandra Rivera said she was drawn to the program because of the traveling aspect.

“That was a really big benefit of Ozanam,” she said. “You could go places and they would cover costs. That benefit isn’t there anymore.”

Without that added incentive of travel, she said that for her cohort, the program has mainly been a lot of assignments and research.

“It’s a grueling four years. It’s challenging,”  Kristen Sweeney, a Graduate Assistant for the program’s juniors and seniors, told the Torch. In her position, Sweeney focuses on the research aspect of the program and helps upperclassmen on the Queens campus with their capstone projects.

The extensive research project begins in each scholar’s sophomore year, involving multiple steps: scholars must choose a social justice issue, conduct a literature review on their topic, establish a methodology, analyze their data and create their own capstone project that attempts to mitigate the effects of said social injustice. This project is a graduation requirement for members of the program.

For many juniors and seniors, the pandemic has thrown a wrench into their research plans. Typically, scholars start their research process in their junior year, which is when they vet sites that would be willing to work with them.

“Due to COVID and closures everywhere, a lot of the sites were unable to support research at that time, or just unwilling due to safety hazards and concerns,” Sweeney said. “So we did have several scholars that were sort of left scrambling to come up with a solid research project or to continue their current research that they had been conducting at the site that closed down.”

According to Sweeney, many of those students were “disheartened by the lack of in-person contact.” At the end of the last school year, the scholars were all able to complete their projects, but it wasn’t necessarily how they’d originally envisioned it.

However, Bennett and Sweeney agree that there have been silver linings throughout this whole ordeal. Bennett acknowledged that although they can’t do things in person, the virtual world “offers so much opportunity to have a greater and more expansive reach.”

They’ve been able to engage more with alumni who are based all over the world and wouldn’t have been able to come to campus to speak to students but are available to meet with them via Zoom, which is something she said they’re going to try to implement after the pandemic. Sweeney also stresses that remote opportunities are often flexible and more feasible for certain types of interviews and situations.

Bennett acknowledged, however, that the pandemic could have unforeseen consequences for the program due to low enrollment at the University and consequent financial constraints. She said that many of the issues the school itself is facing may “trickle down” to the Ozanam Scholars Program.

Still, Bennett remains optimistic about the future of the program.

“I recognize what’s lost right now, but I’m also confident that the program has enough of these opportunities within it that there’s going to be opportunities [for the scholars] to connect,” she said.