Costumes on the Rink 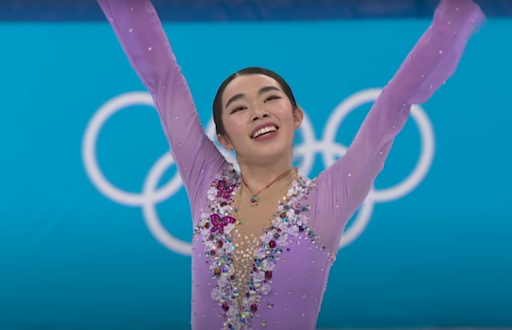 Figure skating costumes have a long and rich history that has led to the costumes we see at the olympics today. While many marvel at the artistry of these outfits, few know the reason behind  the current designs. Most skaters opt for eye-catching costumes to stand out from the large expanse of white ice. This often takes on the form of sparkles and bright colors, as seen in all the examples below. Skaters also have strict guidelines when crafting their competition wear.  According to Rule 501 in the ISU Special Regulations & Technical Rules handbook, allcostumes must cover at least 50% of the skaters’ body and be dignified, leading to the large amount of skin toned mesh seen on many costumes. In addition, no part of the costume may fall onto the ice. Every gemstone is glued on tight and all mid routine quick changes stay attached to the skater. Also, it wasn’t until 2006 that female figure skaters no longer had to wear skirts. All of this and more has led to the costumes we get to enjoy today.

Karen Chen of the United States

This American figure skater sparkled during her free skate program — both in costume and in the eyes of the fans. Competing in her second Olympics, her costume stood out with its lovely shade of lilac, rhinestone butterfly accents, crystals and jewels. In a sentimental turn, the Olymian revealed that her costume was crafted by her mother, according to Good Morning America. She shared that her mother does 90% of the work in her costumes, with her only doing about 10%. Her mother did not disappoint, presenting a stunning look that showed off Chen’s beauty on the ice.

Carillo’s national pride showed through his outfit this year. After all, he has a lot to be proud of — he is Mexico’s first figure skater in 30 years. He wore a custom made shirt that dazzled in gold and black, which was designed by a Mexican designer in his short program, according to The Daily Times. Following up to the short program in the free skate event, he made his love for his country clear with a jacket with “lucha libre” wrestling face masks.

This stunning duo raises the question: is it the Winter Olympics or Halloween? The German pair mimicked the iconic Harley Quinn and Joker couple with flashy costumes and a dazzling performance. The routine actually features line readings from Jared Leto’s “Suicide Squad” Joker! However, the costumes themselves did not have the style or provoke intense emotion such that you would want when impersonating the Gotham-villain pair — in short, they appeared much more plain than you would expect.

Yuzuru Janyu is a Japanese figure skater rumored to have inspired the famous anime series “Yuri on Ice” with his beautiful costumes and complex routines. Here he is wearing a beautiful sky blue costume with subtle embellishments that complement his style and music. Similar to other performers, he wore gemstones along the neck of the top; however, representing his nation’s culture, he chose to forgo a shirt and chose a green kimono in his free skate program. Overall, among the solo male ice skaters, he was one of the leaders for design and beauty.