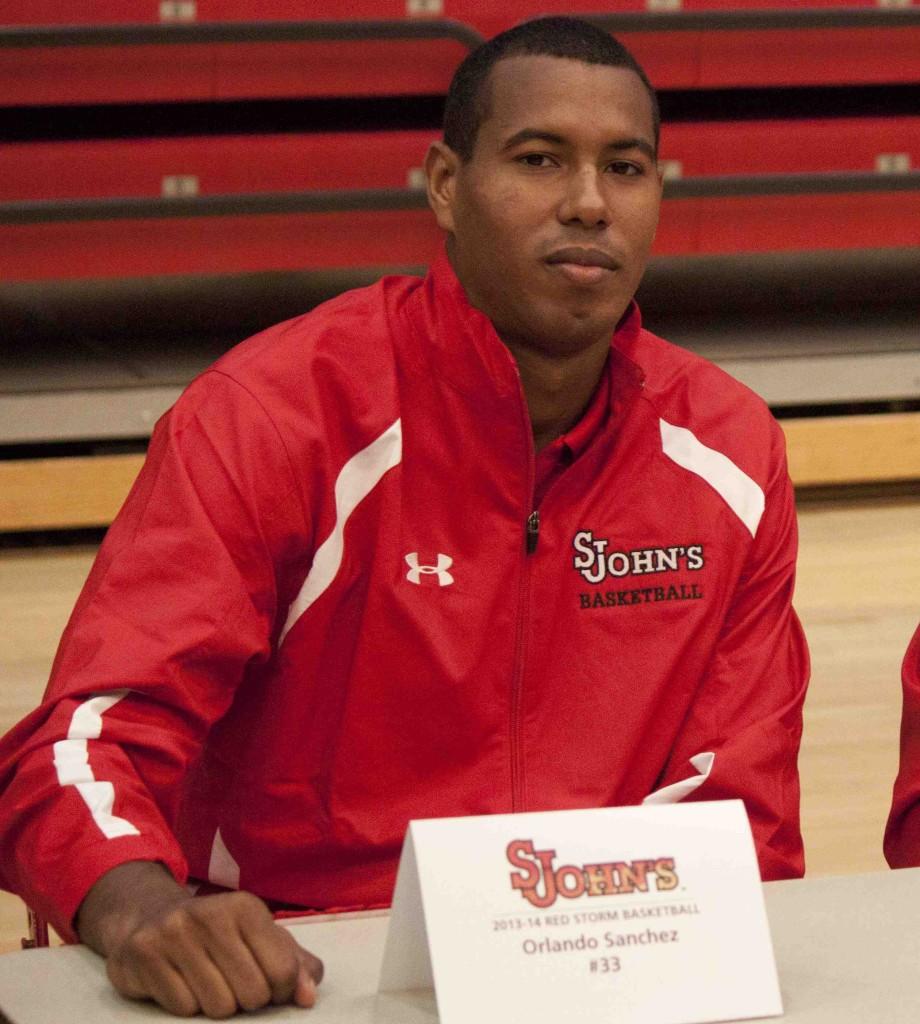 Orlando Sanchez is ready to take the floor after being granted eligibility this year.

After waiting on the NCAA to grant him eligibility last season, St. John’s basketball player Orlando Sanchez is finally ready to contribute in his lone year with the team.

Sanchez, the 6-foot-9-inch forward from the Dominican Republic, will only spend one season in a Red Storm jersey because he played two years at Monroe College and had to contest a NCAA decision that initially ruled him ineligible for the majority of last season.

This season, he is emphasizing winning.

“I’m going to do whatever I can do to win because that’s what it’s about: winning, winning and winning,” Sanchez said at St. John’s Media Day. “If I only score two points and my team wins, I’m happy.”

The 25-year-old Sanchez, who his teammates dubb as “El Primo,” which translates to “cousin” in Spanish, has come a long way to dribble a basketball in Queens. He started playing seriously at 16, but had to leave his hometown of Nagua for Spain in order to financially support his family in the Dominican Republic.

In Albacete, Spain, he played for four-tier basketball club Hellin from Liga EBA and eventually moved to New York to play for Monroe where his rebounding prowess caught the interest of St. John’s head coach Steve Lavin.

Sanchez admitted it was difficult assimilating to St. John’s at first because of the language barrier and prolonged NCAA conclusion, but his relationship with teammates comforted him.

“I have a really good relationship with the players,” he said. “I find myself with family as if I was still in Santo Domingo.”

“I do think the newcomers will bring dimensions that will compliment the returning nucleus,” Lavin said. “Orlando gives us depth along with frontline versatility and a unique skill set. He’s older and mature, and brings physicality that will compliment Chris [Obekpa], God’sgift [Achiuwa] and Jakarr [Sampson],” he said.

He has been regarded as a team-oriented player who can play multiple positions with the ability to score from anywhere on the court.

According to his teammates, the buzz around Sanchez stems from his battles in practice with Sampson – the reigning Big East Freshman of the Year and well-documented NBA prospect.

Guard D’Angelo Harrison, who was recently sitting out from practice due to a hamstring injury, had the opportunity to assess his two front-court teammates.

“When Jakarr and Orlando get at it at practice, it’s like an NBA matchup,” he said. “Everyone takes a step back and says, ‘Wow this is our team.’”

While NBA potential for Sanchez remains to be seen, Obekpa, who led the nation in blocks last season, says he’s just happy to have him back.

“Last year when he [Sanchez] couldn’t play, I was kind of pissed,” Obekpa said. “I know a lot of people who would have just left but he stayed and fought through all of that. We’re happy for him. I know he’s got my back; he’s looking after me for rebounds.”

Although Sanchez faces the heightened and timely expectations of a rising St. John’s men’s basketball team, his boundless motivation lies with making his family proud.

“I’m going to make people proud, make me proud, my family proud.” Sanchez said. “My dream is to enter the NBA and have a good career and help my family.

“The dream for every Dominican is to buy his mother a house,” he said. “I have my mother and two grandmothers and [I] want to give them everything because they’ve given me everything.”