Diaz stays strong in between posts 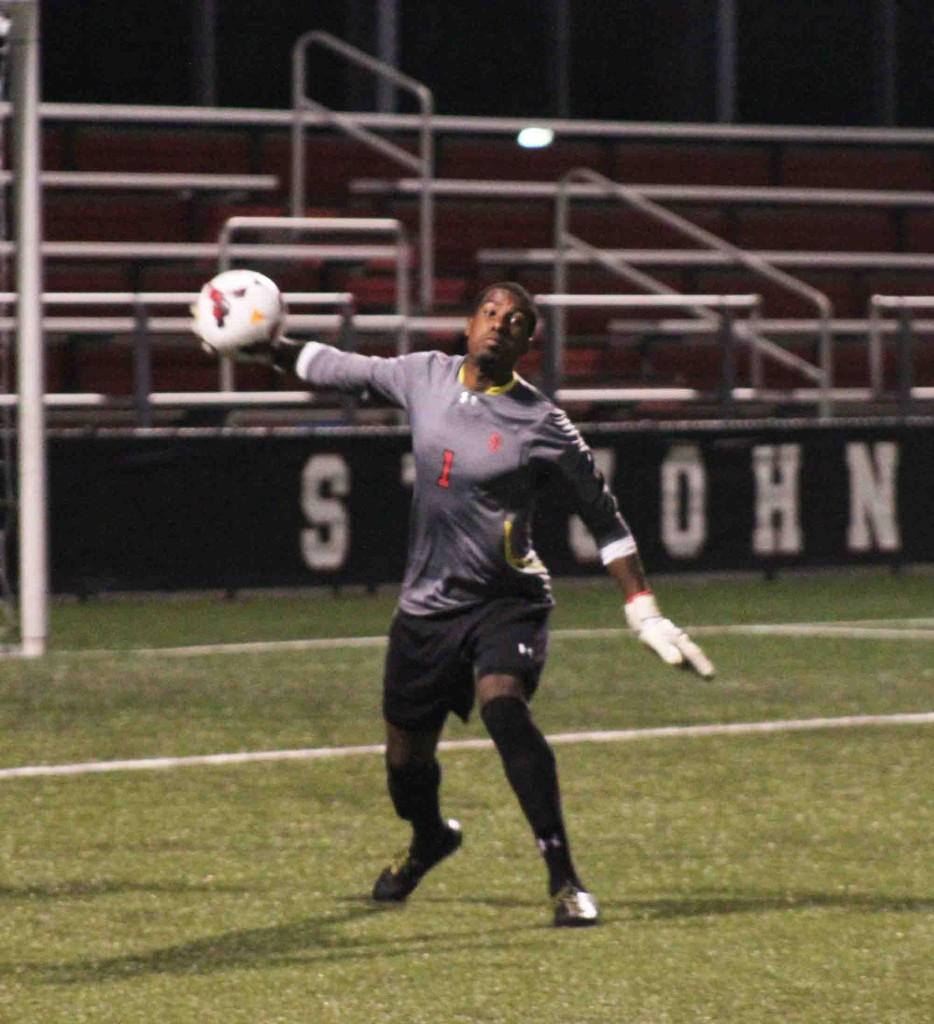 Rafael Diaz has three shutouts in the four-game winning streak.

Clean sheets at Belson are becoming the norm for the St. John’s men’s soccer team, as the Red Storm (5-1) beat West Virginia 1-0 Sunday night.
The victory was the Johnnies’ fourth in a row – and the team’s third straight with a 1-0 score line.

“It really starts in practice with a lot of focus, a lot of preparation for the game,” senior goalkeeper Rafael Diaz said. “And we’re getting a little groove now and the forwards are putting them in and giving us confidence that if we get a shutout, we’re going to win.”

Sean Sepe was the forward who found the back of the net for the Red Storm Sunday. The sophomore slalomed past three West Virginia (3-2-1) defenders before slotting home to the far post in the 23 minute. The goal came barely five minutes after he squandered a chance created by senior midfielder-turned-fullback Jamie Thomas.

“I was mad at myself that I didn’t score the first one and I was like, ‘I’m definitely getting one this game – I’m going to push to get it,’” Sepe said.

The strike was Sepe’s second goal in as many games and his third overall on the season.

“[Scoring goals] is a lot easier for confidence and it just helps my mindset knowing if I score, it’ll help my team out,” Sepe said.

Despite Sepe’s good run of form, the story of the early season continues to be the Red Storm’s firm defense. Head coach Dr. Dave Masur’s implementation of a 5-3-2 formation along with Diaz’s presence in goal has seen the Johnnies thwart opponents in the final third, conceding just two goals in six games.

The Red Storm’s performance against a West Virginia team that scored 12 goals in the five games heading into the Sunday night matchup puts into perspective the Johnnies’ defensive prowess at the moment.

“I think this was the best defensive game we played [thus far],” Diaz said.

“They had a couple early chances in the beginning, but we took care of that and in the second half, I don’t think they had a clear shot. It’s a team that scores a lot of goals and for them to not have that many shots is a testament to what we did.”

However, always looking to improve, Masur was quick to point out his team’s sloppy passing in midfield.

“We gave the ball away too easily,” Masur said. “They [West Virginia] were very aggressive to squeeze up on us after we scored the goal and we didn’t handle it well at all,” Masur said.

Masur and co. will look to record their fifth straight victory when they travel to Nebraska Saturday to take on Creighton.