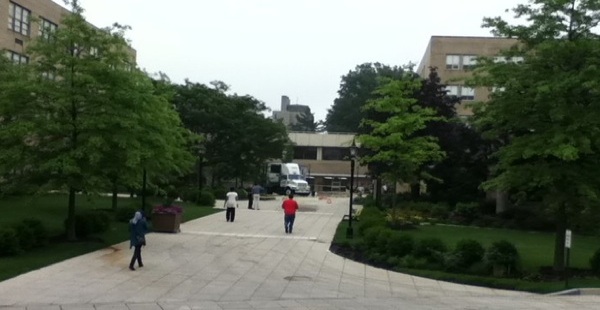 A diesel spill occurred near Sun Yat Sen Hall on the morning of June 23 after a truck hit the fountain in front of Lourdes Hall.

Thomas Lawrence, vice president of Public Safety, said the Performance Food Group truck was attempting to make a delivery to the Starbucks in the D’Angelo Center. The truck was trying to make a turn around the fountain when a diesel tank struck the fountain’s side, causing a gash in the tank.

Lawrence said the diesel tank was for the truck’s refrigeration system and not part of the truck’s fuel line. About 20 gallons spilled from the nearly foot-long gash in the tank. The FDNY and Hazmat crews arrived at the scene and placed absorben on the spilled oil.

A private vender will clean up the absorbed oil as well as some dirt and grass that were contaminated, Lawrence said. He noted that the driver was new to the campus, and was unfamiliar with the layout.

The fountain will be drained and scrubbed, Lawrence said. There were only some splashes of diesel that went into its water, but it will be cleaned as a precaution.