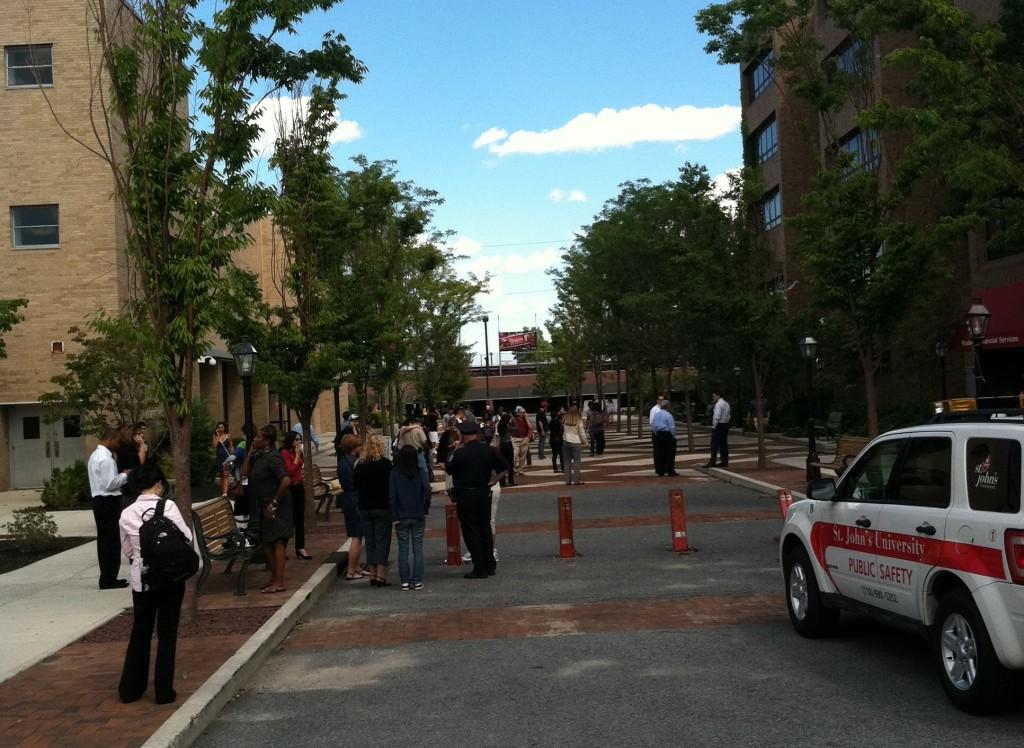 People gather outside Carnesecca Arena after evacuating Campus buildings in the wake of an earthquake.

An earthquake with a magnitude of 5.9 hit near Washington D.C. Tuesday just before 2 p.m. the U.S. Geological Service reported. The tremors were felt in New York City, and on the University’s city campuses.

At 2:12 pm, St. John’s Public Safety Department issued a statement that read, “St. John’s campuses felt a tremor from a reported earthquake in Virginia. There is no need to evacuate the buildings. If you have evacuated please return to the building. We will keep you posted.”

Chehn Shah, who works in Bent Hall, felt the tremor while at his desk. “Everybody noticed it, and there was some kind of panic or something and they all started running downstairs,” he said. “It was big magnitude I guess.”

Daniel Cremens, a Graduate Assistant at Academic Support Services was having lunch with a friend. “We felt a little movement, basically like you were sitting on a boat rocking back and forth. It lasted about five seconds but that was it.”

Cell phone service was disrupted in New York City, and parts of Manhattan were evacuated. The Pentagon and other Washington D.C. buildings were evacuated as well.

The epicenter of the earthquake was Mineral, Virginia. Tremors were felt as far north as Toronto.

According to the U.S.G.S, earthquakes in the eastern U.S. are typically felt over a much broader region. “East of the Rockies, an earthquake can be felt over an area as much as ten times larger than a similar magnitude earthquake on the west coast,” the Web site reports.

The largest previously recorded earthquake in the seismic zone that includes Virginia was a magnitude 4.8 quake in 1875.