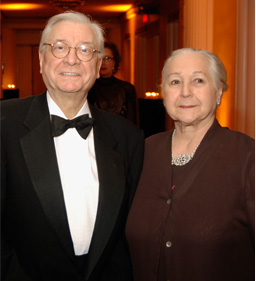 University benefactor and alumnus Donald L. Taffner died early this morning, less than a year after the death of his wife, Board of Trustee member Eleanor Taffner.

According to Karen Butler, Taffner’s daughter, doctors believe the cause of death was a “cataclysmic heart event, like an aneurysm or clot.”

“It’s been a difficult year for him, with the passing of my mom,” Butler said. “But he’s been feeling really great physically lately. This came as a surprise.”

Taffner graduated from St. John’s College in 1953, and received an honorary degree in 1988. He founded DLT Entertainment Ltd., a television production and distribution company, in 1963. He and his wife continued to contribute to the University, most notably to the 2005 construction of Taffner Field House.

“He always joked that he wasn’t the top student at the school,” said Butler. “But St. John’s gave him what he needed to live the American Dream. He attributes a lot of his success to the school.”

“Together with his wife, the late Eleanor Taffner, Donald Taffner was a cherished friend and generous benefactor of St. John’s,” Fr. Harrington wrote. “The Taffner Field House on the Queens campus stands as a visible reminder of their love and generosity toward this University.”

The University will hold a tribute ceremony for Taffner on September 17 at 10:30 a.m., followed by a lunch in Taffner Field House.