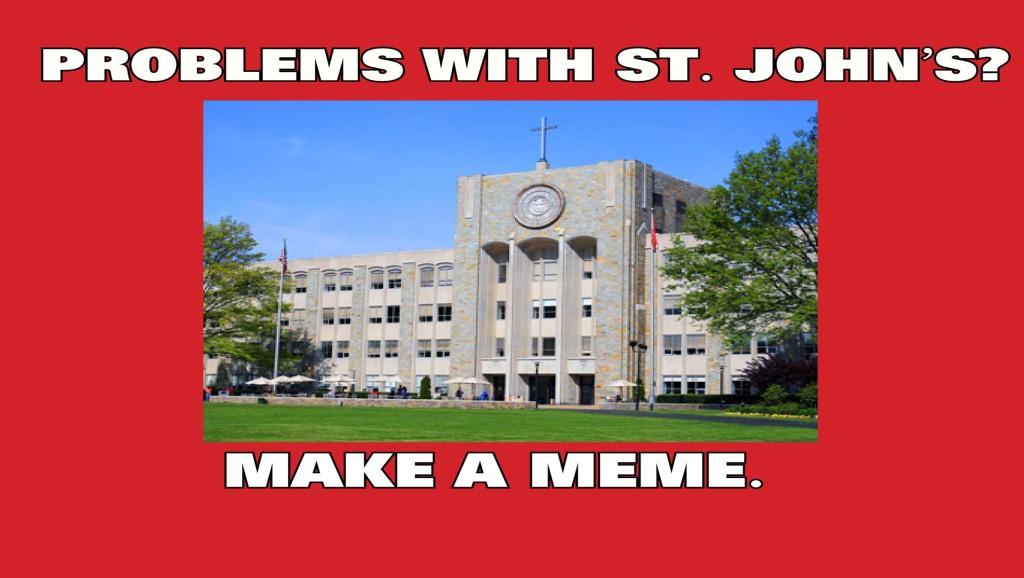 An “Internet meme” is a popular concept that spreads via the Internet in the form of a picture, link, video or hashtag.
Over the past week, students have been creating picture memes about the University, and posting them to a dedicated Facebook page called “St. John’s Problems.”

The memes poke fun at on-campus dining options, the “forbidden” second floor of the library and countless other University-centered topics.

The page’s founders, a junior and senior who call themselves The Meme Team, said the idea for the group came from a similar page about Stanford University.
“I got the idea from my friend that goes to Stanford,” one of the founders said. “I thought it was cool and I could do the same thing for my school.”
At time of print, there were over 300 memes posted, and 2,643 people had “liked” the page. The Meme Team said they never expected the page’s popularity to grow so quickly.

“We started noticing growth after the first day,” they said. “We are surprised every morning when we get on.”

Kristie Valverde, a sophomore, first saw the page a few days after it was created. She said she finds the memes funny and accurate.
Valverde said her favorite meme is a pie chart representing students in the D’Angelo Center. “One little sliver was ‘come here to study,’” she said. “And the rest was ‘come here to chill.’”

Dolan said he believes the popularity of “St. John’s Problems” will fade, but the Meme Team says they are here to stay, and the trend will only get bigger.
“It will last as long as there are memers at St. John’s,” they said. “And this week, we’ve been staying up until the wee hours, expanding through Tumblr and Twitter.”

The Meme Team is also planning expansion to other schools.“We’re trying to branch out to a few other universities on the West Coast where we have friends,” they said.

Though most students who have seen the page find it humorous, some felt the memes were offensive.

The Meme Team thinks the popularity of the memes is evidence of the potential negative impact of legislation like SOPA.

“It would put a gag on many outlets of free expression for young people around the world,” they said. “It would mean the downfall of Internet meme culture, which is just the tip of the iceberg.”

Some students commenting on the page worried the administration would be upset by the memes poking fun at the University, or would attempt to shut down the page.

However, the University has “no jurisdiction over these types of pages because they are random sites,” Assistant Vice President for Media Relations Dominic Scianna said.

“Being that this is not the official University Facebook page, we do not control content or monitor its use,” Scianna said. “But we are always mindful of student concerns and welcome suggestions of problems, and appreciate positive comments and feedback from our students as well.”

The Meme Team believes the site provides a forum for students to voice their complaints about the University in a harmless, hilarious way.
“We can only hope that administration will hear our complaints, but that’s not our main focus. We’ve made it solely for laughs, and we’ve had a great time so far,” they said. “The Meme Team doesn’t usually dedicate pages to schools, but when we do, we prefer St. John’s.”