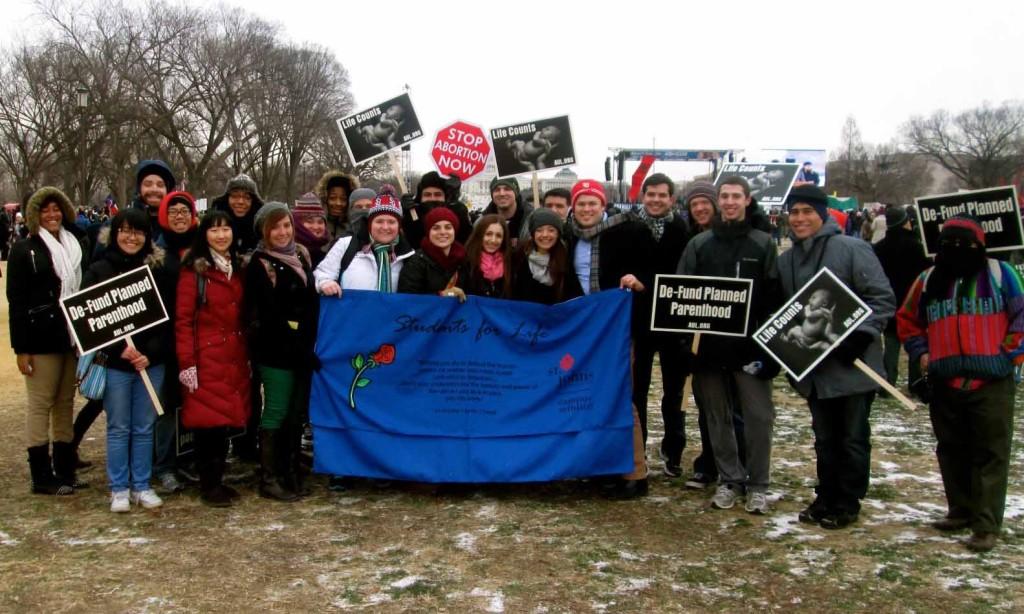 More than 30 students traveled to the nation’s capital on Jan. 25 to participate in the anti-abortion demonstration known as the “March for Life.”

The annual event has taken place in Washington D.C. ever since the Supreme Court decision on Roe v. Wade 40 years ago.

The ruling legalized abortion in the U.S. The “March for Life” is the largest civil protest in the world with this year’s participants estimated to be numbered at around 400,000.

The large turnout came in the aftermath of the 2012 election season in which anti-abortion Republicans suffered after Democrats made women’s rights issues a central campaign theme.

Of the 37 students who attended the day’s events, 15 were members of Students for Life, a Campus ministry student group that works, according to the group’s website, “to promote dignity and respect for all people at every stage of life.”

James Finnegan, the graduate assistant for the Students for Life, saw the march as an opportunity for students to “grasp both the magnitude and joy of the pro-life movement.”

He hopes that participants “came away with renewed enthusiasm and hope for the pro-life cause.”

Upon arrival, participants heard from various speakers including Rick Santorum, Republican presidential candidate in the 2012 election, and a video message from Speaker of the House, John Boehner (R-Ohio).

The march on Capitol Hill and to the Supreme Court followed.

“At one point you could see thousands of people,” explained freshman Rosalie O’Brien, who described the experience as emotional and overwhelming for many who attended.

The main goal of the “March for Life” is to overturn Roe v. Wade, but there are other objectives as well, O’Brien said.

“I wanted to go because I think it is important to advocate that pro-life extends to more issues than just abortion,” she said.

“The biggest thing we can do is be advocates for life.”

Nicholas Wentworth, the treasurer of Students for Life, agrees that “the march strongly protests the legalization of abortion” but that it also opposes “euthanasia, capital punishment, war, and abuses against the aged or terminally ill.”

Wentworth said that it is abortion that can be viewed as “the civil and human rights issue of our time.”

He believes the movement has seen success in recent years in this country.

“St. John’s students have a responsibility to continue this tradition of affirming the rights of all people, regardless of race, religion, sex, sexuality, passport or age.”