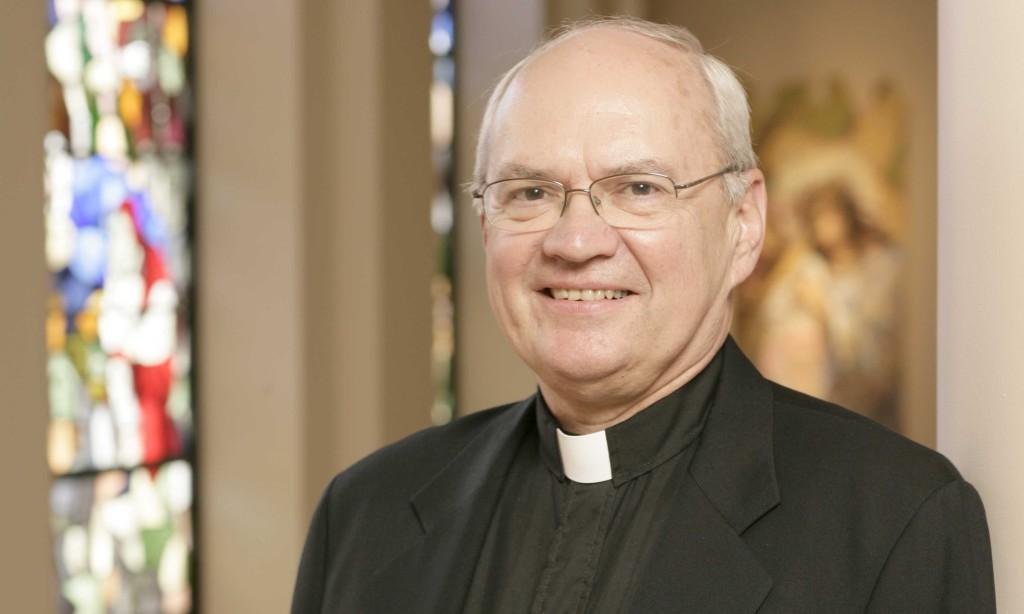 An earlier version of this story was published on May 3, 2013. The more recent version, below, appeared in the Torch’s May 8, 2013 ‘Special Report’ print edition.

Rev. Donald J. Harrington, C.M., President of the University, announced in an email to the University community Friday that he will step down effective July 31, ending his 24-year tenure.

“I write to inform you that I have today advised the University’s Board of Trustees of my intention to retire as President of St. John’s, effective July 31, 2013,” he said in the statement.

Robert Wile, senior vice president and chief of staff to the President, has resigned effective June 30, according to a University spokesman.
Moments after Harrington’s statement was released, Peter D’Angelo, Chair of the Board of Trustees released a statement through email stating that the Board had been notified of Harrington’s decision.

The news comes after the Board of Trustees announced on March 8 that it had commissioned an independent investigation led by attorney Frank Wohl to look into media reports, which focused on Harrington, Wile and former dean Cecilia Chang.

That investigation came toward the end of a school year that saw Chang’s federal trial for embezzlement come to a close after she committed suicide in her home in Jamaica Estates in the early morning hours of Nov. 6, 2012.

Harrington testified at the trial on Oct. 17, 2012 that he “wasn’t real comfortable” with the perks from Chang and only accepted them on Chang’s recommendation, according to a transcript of his testimony obtained by the Torch. He also said that Chang told him that accepting expensive gifts on trips to Asia was a cultural necessity.

“She explained to me that that was very critical, that this was a great sign of respect,” he said in the testimony. “If you did not do that, if you didn’t accept gifts in return, that was a sign of lack of respect.”

His testimony caused a stir, with the New York Daily News mocking the “vow of poverty” that Vincentian priests take. He met with the Torch in November in an attempt to clear his name and explain his relationship with Chang, but the worst for him was yet to come.

On Feb. 24 of this year, New York Magazine published a report outlining a deeper relationship between Chang and Harrington and Wile than had been previously implied.

The report detailed the lavish gifts, perks and vacations Chang had provided Harrington and Wile, including a trip to Turks and Caicos for Harrington after his father’s death. He brought Wile and Wile’s girlfriend, a sophomore undergraduate at St. John’s at the time. Chang also provided Wile with a Taishin credit card that Wile used at nightclubs, pro shops and restaurants – expenses that were all approved by Harrington. Chang allegedly covered expenses for the two, saying that they were paid for by donors. The expenses were, in fact, being billed to the University.

New York Magazine also reported in March that Wile had received interest-free loans from the University as well as loans from a Board of Trustees member and a contractor who worked for St. John’s. NY Mag also reported that Harrington and Wile had a business relationship that wasn’t reported to the Board.Harrington recommended that Wile receive a bonus in the form of a $100,000 interest-free loan from the University in 2006 – the same year the two purchased a property through their partnership.  The board’s audit and compensation committee approved the loan.

The retirement statement also follows the April delivery of a faculty petition to Harrington’s office asking for more transparency in the investigation process. The letter, written by five professors in the history department, included the signature of 66 faculty members from the Queens campus.
Neither the statement released by Harrington nor the statement released by D’Angelo directly addressed the controversies. The closest reference to the issues from this school year came from Harrington.

“The difficulties for everyone during the past year have convinced me, after much prayer and reflection that the time to leave the presidency has now come,” he said in the statement.

Harrington, 68, was born in Brooklyn and became a Vincentian priest in 1973. He went on to become the President of Niagara University in 1984, where he stayed until moving to St. John’s in 1989.

During Harrington’s 24-year tenure as President, St. John’s University underwent changes in both academics and development. The Queens campus was transformed from a commuter campus to one with a resident village and more students from around the country. Enrollment went up ostensibly due to the increase in international and students from outside the tri-state area. The University also expanded its footprint with campuses in Manhattan, Oakdale, Rome and Paris.

A University spokesman declined to address whether Harrington would hand out diplomas at this month’s commencement ceremonies, but he was present Monday for a ribbon-cutting ceremony outside the University Career Services Center in Chiang Ching Kuo Hall. The spokesman also declined to comment on the current status of the Board of Trustees’ investigation.

Rev. James J. Maher, C.M. had been tabbed by many as Harrington’s successor, but is leaving the University to become the President of Niagara University on August 1. The last two St. John’s presidents, Rev. Joseph T. Cahill, C.M. and Harrington, previously served at Niagara, but its current president, Rev. Joseph L. Levesque, C.M., announced his retirement in January.

Friday’s statement from D’Angelo and the Board of Trustees said that an announcement would be made in the near future regarding a transition to new leadership. When contacted for information regarding the transition, a University spokeswoman referred to the statement.