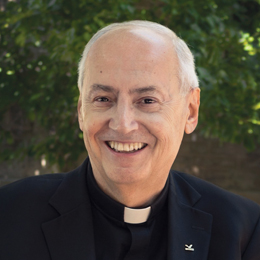 Rev. Joseph L. Levesque, C.M. has been elected interim President of the University by the Board of Trustees, according to an email sent from Peter P. D’Angelo, Chairman of the Board, to the University community Wednesday morning.

Levesque will assume the role of interim President effective Aug. 1 following Rev. Donald J. Harrington’s departure on July 31. The University will conduct a national search to permanently fill the position over the coming months, D’Angelo said.

“We are confident of a seamless transition as Fr. Harrington steps down as president at the end of this month, and know that, over the coming academic year, Fr. Levesque will continue to build on his outstanding record of accomplishment,” D’Angelo said.

Levesque served as President of Niagara University from 2000 until this year. Prior to that, he served as provincial superior of the Eastern Province of the Congregation of the Mission for the Vincentian Community while also serving as Chair of the Boards of St. John’s and Niagara, according to the St. John’s website.

Harrington announced in May that he decided to step down this summer after 24 years as president, news that came as the Board of Trustees was in the midst of conducting an investigation into accusations of financial impropriety at the University’s highest levels.

D’Angelo said in the email that the Board is in the process of completing the investigation and will update the University community on the matter later this summer.