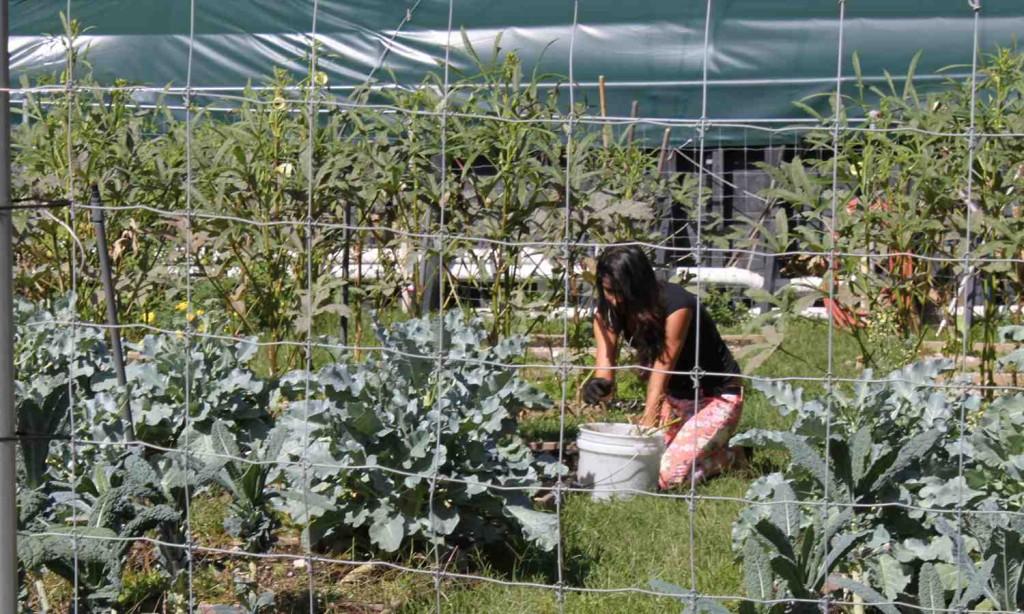 A student taking care of the all-organic garden by the residence halls.

The University participates in a campus-wide environmental project known as the Sustainability Initative where students and faculty team up to continually make the school more environmentally friendly and aware.

“I think there’s a high level of sensitivity to focus on this issue, as an institution,” said Brij Anand, vice president for campus facilities and services. “We are going through a cultural shift, and we as educators feel we play a large role in educating our future generations with the use of natural resources.”

Efforts towards sustainability at SJU started six years ago when the University took part in Mayor Bloomberg’s idea to reduce carbon footprints by 30 percent for institutions in NYC, commonly known as the “Bloomberg Challenge”.

Since 2007, the University has participated in the “Bloomberg Challenge” and has been able to reduce 20 percent of its carbon footprint (how much electricity and water students use, etc.), according to Anand.
The project doesn’t just stop with Bloomberg’s challenge, though. Each year the University’s sustainability committee — which consists of staff, faculty, and student government — is said to have made efforts toward improving both lighting and water conservation.

One of the University’s new initiatives designed to help preserve water has been the 17 new cooled-and-chilled water stations in the residence halls. Instead of using water bottles, the University has given out 3,500 water containers to all students in Residence life as well as 1,700 to all new students who came in this year, Anand said.

The sustainability committee has also worked on an efficient lighting system campus wide. They’ve invested money into restoring the building management system (which controls the stop time of heating, air conditioning, the electric, etc), as well as installing motion sensors in certain offices and classrooms.

Amidst the various efforts the University has made towards conservation, it has also taken part in a number of competitions nationwide. Each year SJU gets involved with the nationwide Energy Conservation Competition “Compete to Reduce.” Within the University, it is called the Watt Stopper program. This competition occurs in the dorms every semester. SJU finished in fifth place last year nationwide among 100 universities and colleges. The University also takes part in Recycle Mania, which is also a nationwide competition that SJU engages during the spring semesters.

Meanwhile, two notable NYC programs have recognized the University’s sustainability efforts. NYC’s “Million Trees NYC” program and the “Tree Campus USA” program both promote healthy trees in NYC as well as student involvement. In 2012, SJU was given an award by the Arbor Day Foundation, which runs the “Tree Campus USA” program. The award was in recognition of the amount of trees we have planted around campus, along with the amount of students that were actively involved in making it happen.

“We would like to have more student coordinators,” Anand said. “It’s a great way to have students to become aware.”

These students help with projects like the all-organic garden, which is located by the residence halls. When the energy coordinators started in 2008, they were only at 12 percent of the recycling rate (keeping waste from landfills).

Anand said now they are at 30 percent and their goal is to get to 50 percent of the recycling rate.