Hanging with ‘Looie’: Carnesecca sits down with the Torch, reflects on past 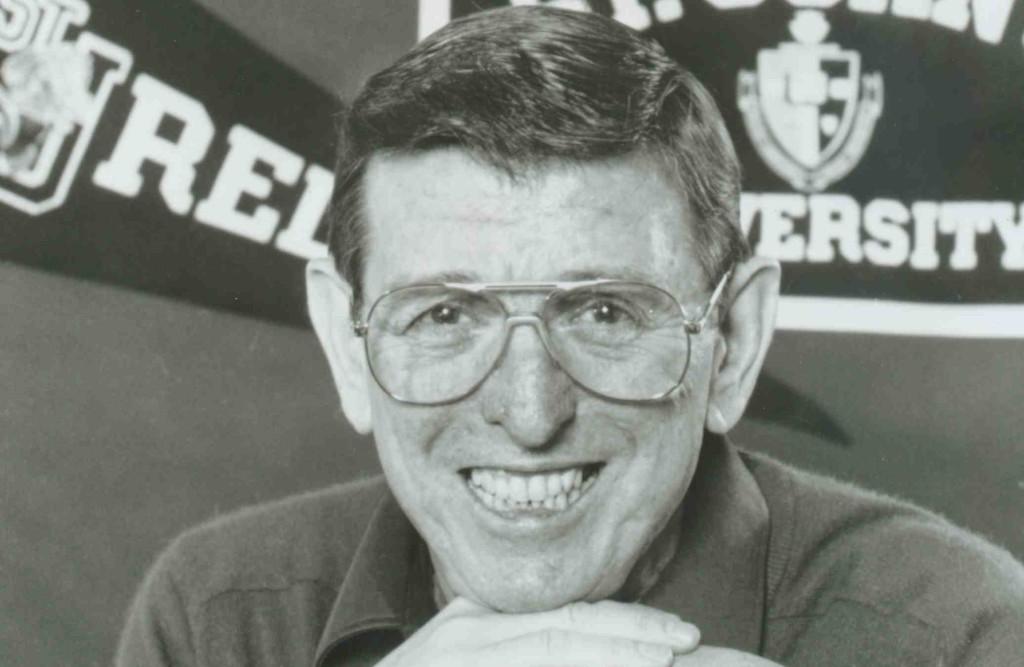 The man who was once known for his swift pacing of the sidelines whenever his players received an outlet pass for an easy bucket now uses a cane to get from point A to point B. He may move slower than he once did during his
coaching days, but his mind is still as fast as ever.

Lou Carnesecca, 88, strolled into the arena that bares his name Saturday morning for the third annual Dribble for the Cure. He greeted current players and coaches as if he was the man of the hour. His
presence was magnetizing. Everybody, from St. John’s head coach Steve Lavin to fans of the program, swapped their own experiences with the winningest coach in the history of the University. Carnesecca sat down and spoke to student athletes and coaches as only he could, with an reminiscent mind and smile.

The story of ‘Looie’ is an unorthodox one. Most coaches are one of two types of people: Inquisitive athletes that were impactful players during their playing career but couldn’t make the professional level or they were in the upper echelon in their sport and wish to share wisdom to their teams. Carnesecca was neither. To simply put it, Carnesecca wasn’t a great baseball player and an even worse basketball player. But it was his passion that got him so far. Carnesecca made his high school junior varsity baseball team as an upperclassman because his coach at St. Ann’s (now Archbishop Molloy in Queens) saw his passion for the game and awarded him a spot on the team. He was a second baseman that hated ground balls but felt like he had a chance with pop flies.

Carnesecca’s father, Alfred, was a grocery store owner in East Harlem who envisioned his son as a doctor. When Carnesecca graduated high school, he attended Fordham and figured he would honor his father’s wishes, even though his heart was in coaching, he said.

“I ran out after two weeks,” Carnesecca said. “I was asked to please leave.”

Carnesecca said he wasn’t happy at Fordham. Most of his friends were at St. John’s: Dick McGuire, Patty Digilio, John Cannizzo and Danny Buckley who convinced Carnesecca to drop out of
Fordham and make the move to Queens.

“We all played against each other in high school,” Carnesecca said. “There was a bond in that parochial school system; we knew everybody, we played post season games together even though we played against each other in the league. It was a great, great feeling. So [Buckley] knew I was unhappy. I think the Lord in his infinite wisdom would’ve caused a lot of deaths [had I stayed at Fordham].”

Carnesecca’s first coaching job was at his alma mater St. Ann’s where he won a city championship in his second year. After seven years at St. Ann’s, he was asked to be an assistant head coach at St. John’s. He was taught from Joe Lapchick who coached the varsity baseball and basketball teams. In those days, University policy was that the head coach of the basketball team was also the head coach of the baseball team he said. Another University policy said that retirement was mandatory at the age of 65 from professors to maintenance men to basketball coaches.

Carnesecca took the reins as St. John’s head coach before the 1965-66. In his inaugural season with the Redmen Carnesecca’s team went 18-8 and lost in the first round of the NIT. In his second season he was named ‘Coach of the Year’ by the Metropolitan Basketball Writers Association.  After Carnesecca was commememorated in a Manhattan hotel, Jack Kaiser, Jack Glimmer, Marty Satalino and Lapchick accompanied him to Danny’s Hideaway for a couple of  drinks.

Carnesecca was feeling on top of the world, he said. Everything was going smoothly and he had finally made it as a basketball coach. As the gentlemen checked their coats and hats, Glimmer asked the hatcheck girl if she knew who Carnesecca was. When she said she didn’t, Lapchick pulled out a card that read “Peacock Today; Feather Duster Tomorrow.” Looie still has the card in his wallet. It’s the size of a business card, green and worn out.

“[Lapchick] always told me to keep it in my wallet,” Carnesecca said with a smile in his face. “That’s a relic.”

The card’s humble message also helped Carnesecca to realize that players are more important than the coaches. When Carnesecca left St. John’s to coach and be the general manager of the New York Nets of the ABA, he coached the talented Rick Barry. In his first season, his team took the Indiana Pacers to game seven of the ABA finals but lost the deciding game on an inbounds play to Barry, who took his eyes off of a good pass thus, turning the ball over and giving the Pacers the championship. The next year, Barry left the team and the Nets lost 50 games. They still made the playoffs but didn’t have an impactful player like Barry.

Carnesecca strikes out on ‘Dr. J’

Carnesecca says he learned another lesson when he refused to sign Julius “Dr. J” Erving. Carnesecca failed to sign Erving three times, he said. His first opportunity was when Erving was playing at Roosevelt High School on Long Island. Erving was unknown to most colleges. There were three schools that were interested in Erving’s services – Hofstra, UMass and St. John’s. Back in those days, St. John’s prided itself on recruiting local talent and he was only a ride down the Southern State Parkway. Willis Reed, who was an assistant for Carnesecca in 1979, even offered to recruit Erving, but UMass invited Erving and his coach over to their campus for a visit and his college fate was sealed, Carnesecca said. The second opportunity game when Carnesecca was with the Nets. Erving had just finished his third year at UMass when he showed interest in signing with the Nets. Carnesecca says he felt his services were more needed at UMass; Erving signed with the Virginia Squires. Then after his first year with the Squires, Virginia was having financial problems and offered Erving to the Nets for cash, Carnesecca declined.

“It was one of my most brilliant moments,” Carnesecca said sarcastically. “I felt that wasn’t the right thing to do at that time. I was wrong, because what I was doing was stopping a young man from making a living. Can you imagine Rick Barry and him together? I’d still be in the NBA.”

‘One of the great days in St. John’s history’

In 1979, The Redmen played in the NCAA tournament Eastern Regionals in Raleigh, North Carolina. It was known as ‘Black Sunday’ because St. John’s had just knocked off Duke and North Carolina lost to Penn. The excited team boarded their flight back to New York before departing for the regional semifinals. As the elated bunch landed, it was agreed upon by the St. John’s sports information director Katha Quinn and the press that the flight passengers on. The plane first and the team would follow. The passengers on the plane had visitors from Poland who were sitting with the team the entire flight. When it was time to leave the plane and enter the terminal, there were so many people that it was tough to differentiate the press from the visitors. Carnesecca was thanking the Polish visitors.

“I started talking to people; they couldn’t understand a word I was saying,” Carnesecca said, laughing. “I was so excited, that was one of the great days in St. John’s history.”

In 1985, the Redmen made the final four and drew a Georgetown team that might go down as one of the greatest teams to not win a championship. Georgetown took care of St. John’s but lost to a miraculous Villanova team led by head coach Rollie Massimino.

“I think [winning a championship] would’ve been a wonderful thing for the team, for the players, for the alumni, faculty,” Carnesecca said. “But you know, the world as it is, is wonderful.”

Carnesecca’s contributions were rewarded on Nov. 23, 2004, when Alumni Hall was named after him. Looie acknowledges that while his time at St. John’s was special, he doesn’t forget the great coaches before him, Lapchick and Buck Freeman, as well as the alumni and current students.

So as he sits down in “their building” with his brown polyester suit and flat cap on Saturday morning, he sips his coffee from Dunkin’ Donuts – cream and sugar. He wishes that the University had a Dunkin’ back when he was coaching. He sits and looks at all of the participants for “Dribble for the Cure” he has a sense of fulfillment in not only his time at St. John’s, but for what the University stands.

“I think it’s important to give back. Plus the cause today, when you do things for other people – look at all these people showing up for other people – I think that’s a marvelous way of expressing the Vincentian spirit,” Carnesecca said. “From St. Vincent de Paul, I think this is marvelous and to give a great example to even the little kids, the world is not just yours but it belongs to everybody.”

He also had some encouraging words for the current state of the program.

Carnesecca can be seen at most home games at Carnesecca Arena or Madison Square Garden.

“I like these guys. They’re talented, and they’ve got the experience, they’ve gone through the wars. They played a lot of tough ball games so it’s there,” Carnesecca said. “Now the biggest thing is God have mercy, they let them get any injuries, because I like this bunch to make some noise.”