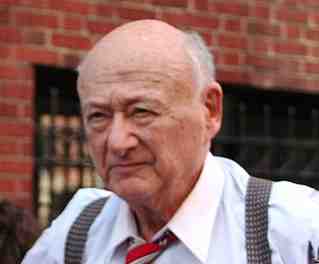 Mayor Ed Koch had documentary based on his tenure play on Oct. 15.

The University will present ‘Koch’ on Oct. 15, a documentary featuring the former mayor of New York City, Ed Koch, and the dramatic transformation the city underwent during his tenure from 1978-89.

As part of the annual Participate initiative, the movie and the panel discussion afterwards are meant to engage students in the civic process as Election Day for New York City mayor and Queens Borough president approaches.

Brian Browne, assistant vice president of the Government and Politics department, runs Participate and recommends students to learn about a mayor most of them haven’t experienced and see similarities with political issues from the past.

“It will teach students who may not remember what the city used to be like, just how far we’ve come and how instrumental Mayor Koch was during this transformation in New York City,” he said. “There are also some parallels in the mayor’s race in 1977 and today in 2013.”

Edward Irving Koch ran three successive terms as mayor and was most known for bringing the city back from a daunting fiscal crisis without the help of the federal government. He was also hailed for his efforts in public housing, which still stand today. “Koch,” directed by Neil Barsky, was released earlier this year on Feb. 1, the same date he died due to heart failure.

After the documentary, a panel discussion headlined by Sam Roberts, an Urban Affairs columnist for The New York Times, Jonathan Soffer, Ph. D., author of “Ed Koch and the Rebuilding of New York City,” Robert J. McGuire, Esq., former New York City police commissioner and St. John’s grad, and Martha K. Hirst, the University’s executive vice president, chief operating officer and treasurer who worked for the Koch administration will entertain questions from the audience and add an up-close and personal view of the Mayor and the city’s transformation.

“I think it will show how government can function and what it can accomplish when it is functioning,” Browne said. “It’s called the second hardest job in America for a reason.”

In Browne’s view, Koch shattered the stigma that the Big Apple was an ungovernable city rotted by its corruption and prostitution rings, and instead he proved that it can be tamed.

“He showed that New York City can be governed, “he said. “He really seized the idea that someone has to be in charge.He was a great character for New York City.”

The documentary will be shown at 5:30 p.m. in the Little Theater and the panel discussion will follow promptly.