‘Take Back the Night’ takes stand against violence 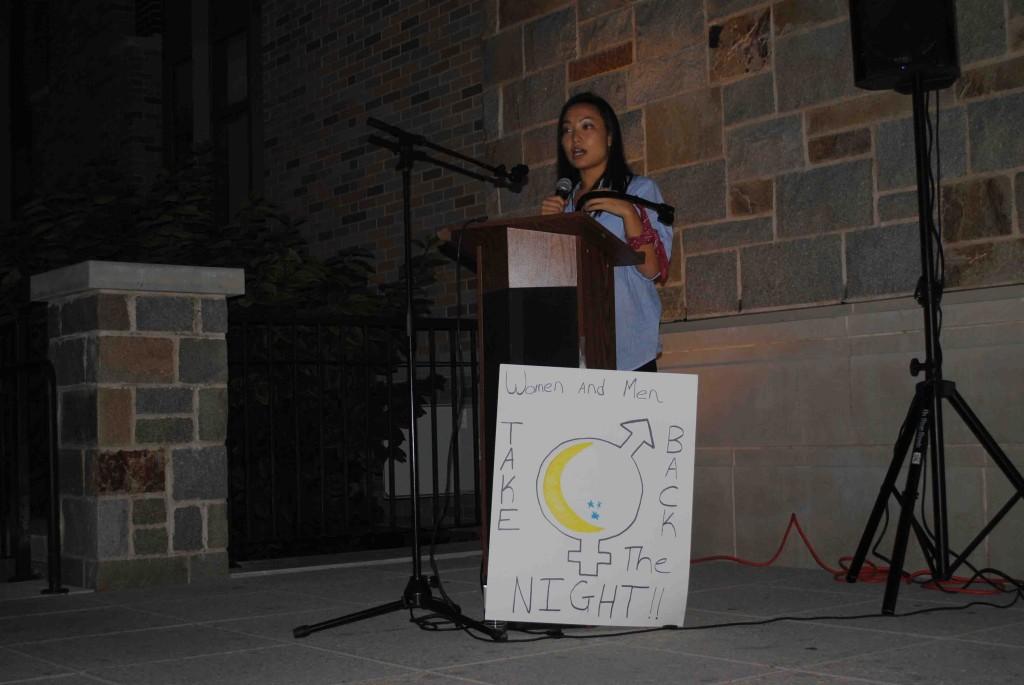 Several organizations gathered on campus Thursday evening to promote “Take Back the Night,” an annual event that aims to educate the community about sexual violence and lower assault rates.

The department of Student Wellness, Public Safety, Campus Ministry and other advocates for non-violence took part in the event to demonstrate solidarity with students.

“We, as individuals, must take a stand. This is not a women’s issue. It’s everybody’s issue,” said Ruth DeRosa, associate director of Wellness Education.

Members of  the Student Wellness’ Sexual Assault Prevention program and counseling services were in attendance to talk, offer support and inform students about future opportunities to get involved.

“[Public Safety is] here to protect you,” Breheny said. “If you’re ever in a situation and feel like something isn’t right, go with your gut. Call us.”

He encouraged students to take shuttle buses, travel in a group when possible and not hesitate to seek help from Public Safety for any type of issue that may occur.

Junior Donya Nasser, a minor in gender studies, also spoke at the event. She offered the audience statistics, such as one in every four college women being the victim of sexual violence, and 42 percent of those affected never tell anyone.

Nasser’s genuine tone and personal accounts seemed to have an effect on listeners.

“I wanted to come out to show that male students are committed to this issue as well,” Aaron Young, a junior, said.“So many people are affected, I feel obligated to show my support,” junior Hannah Iamondo said.

Among the stressed points of the speeches was that the victim should never feel guilty or be intimidated into silence. Miniature flashlights and whistles were given to students as they were reminded to always be smart and remain aware of their surroundings.

Resident Minister Megan Fraino of Campus Ministry led the group in prayer for all victims, families and others affected.

At the end of the night, students were invited to join the march from campus to Henley Road and back to inform the community that the violence would no longer be tolerated.

Members of the St. John’s community are not the only ones taking a stand and participating in the initiative.

This year alone, over 50 “Take Back the Night” events will be held nationwide, from walks and marches to speeches and candlelight vigils. Inspired by this brave, forward-thinking movement, men and women everywhere are coming together to end the injustice and take back the night.