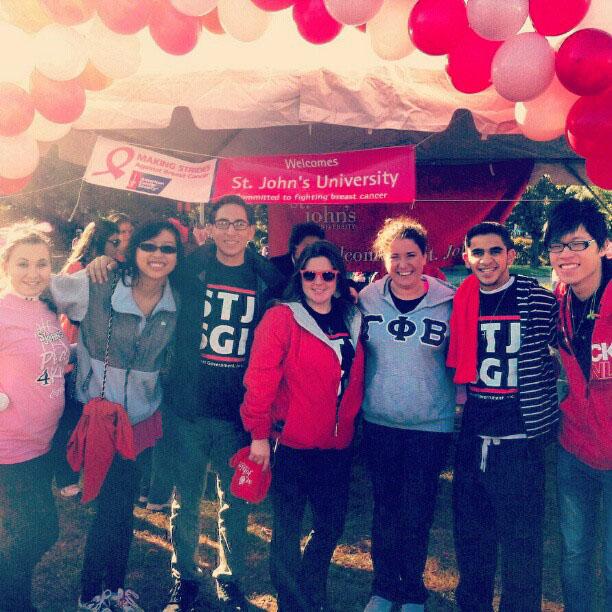 The University will rejoin the fight against breast cancer during its annual Making Strides Against Breast Cancer Walk on Oct. 20.

St. John’s University has participated in the annual Making Strides Against Breast Cancer Walk for more than a decade, raising more than $200,000 in support of the fight against the deadly disease, according to Joseph Sciame, vice president of Community Relations.

More than 500 people, representing the University by wearing “a sea of red and pink,” attended the event at Flushing Meadows Corona Park, according to the University’s website.

Mina Salib, a recent graduate, was impressed by how the University mobilized students so that SJU was well represented at last year’s Walk.

“Everywhere you looked, you saw [SJU] students around,” Salib said. “It really felt great to be a part of something that was so much bigger than any one person. To hear how this disease has affected so many people was eye opening.”

This year, University faculty, students and alumni will rejoin the fight. The University will provide transportation from the Queens campus to the park to encourage student participation.

According to Mr. Sciame, the University views the Walk as more than merely a fundraising effort.

“The event is an opportunity to learn more about this dreaded disease and become active fund-raisers,” Sciame added. “We’re doing something that is typical of the Vincentian spirit.”

In addition to the Walk, SJU plans to hold a number of activities in support of the fight against breast cancer during the month of October, which has become known as the National Breast Cancer Awareness Month.

Freshman Carly Johnson is looking forward to partaking in the Walk for her first time.

“It’s awesome to have the opportunity to do this,” Johnson said. “It’s cool to think about the St. John’s community coming together for such an important cause.”

The event coincides with recent findings that walking, as an activity, may reduce the risk of developing breast cancer.

According to a recent study by the Cancer Epidemiology, Biomarkers, and Prevention Journal published on Oct. 4, walking at least seven hours per week is associated with a 14-percent lower risk of developing breast cancer after menopause.

The article notes that women  in this extensive, 17-year long, study “benefited from physical activity whether they were at a healthy weight, overweight or obese, and even if they gained weight during the study.”

In addition to the benefits of exercise, the University body is also encouraged to join the walk to hear inspirational speeches from breast cancer survivors.  SJU’s cheerleading squad, dance teams and pep band are also scheduled to perform.

The walk will begin at the carousel located near the Queens Zoo and will proceed on a set route to end at the carousel. $10 is the suggested donation for the event.