St. John’s rallies for the Philippines 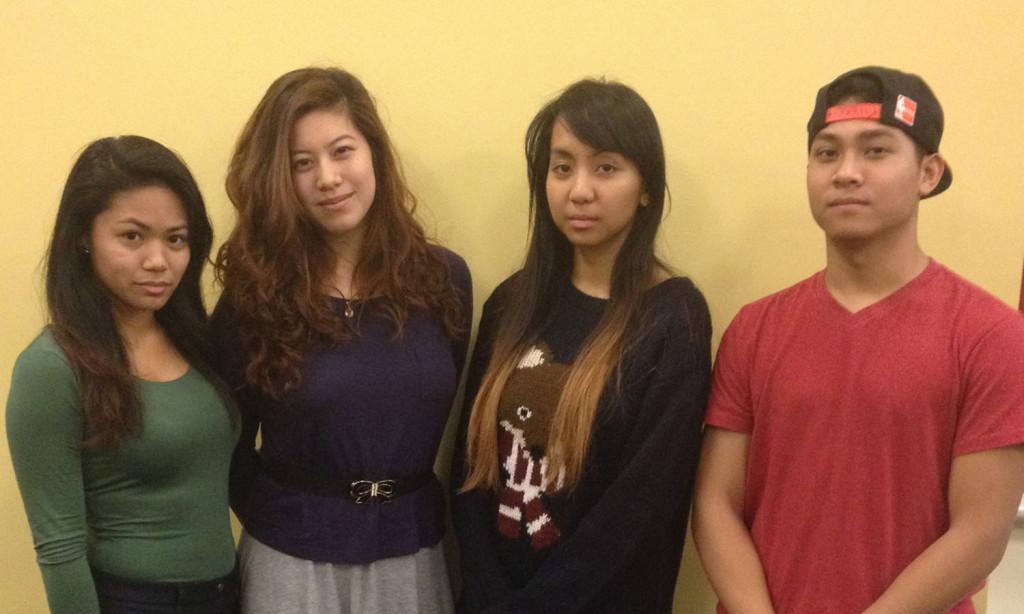 P.A.R.E. has begun fundraising to support the Philippines.

Secretary of Philippine Americans Reach Everyone (P.A.R.E.), Michelle Belasoto, gave some insight into the conditions her family is experiencing over in the Philippines, which has been declared to be in a state of national calamity.

“My dad’s family lives in Iloilo and Samar and my mom’s family lives in Cebu. I was only able to get in contact with them yesterday,” she said. “Houses have been destroyed, and my family’s roof was ripped off. Luckily, everyone in my family is safe, but there are still people who haven’t heard from their families or are missing.”

No food. No water. No electricity. Bodies of loved ones and lifelong friends scattered amongst debris on the streets that they once called home. Many need medical attention, but only a few can supply it. Flattened homes and lives taken abruptly and way too soon.

Since Typhoon Haiyan first struck the islands of the Philippines on Nov. 9, these are the conditions through which its victims are living through. According to Philippine officials on Tuesday, 1,774 corpses were found and United Nations fears the toll may rise to over 10,000 due to bodies being in inaccessible places right now.

CNN reports that at least 2.5 million people are in need of immediate food and aid. Among that number, 300,000 of them are pregnant women or new mothers. And what used to be bustling cities, such as Tacloban and the Eastern Philippines, are now a wasteland of unbearable stenches.

In raising awareness about the devastation, P.A.R.E. has been finding ways to help support the Philippines over the last few days. Treasurer Oliver Gallego has stated that fundraising for the Philippines is their priority right now.

“This week we are planning to have a table for donations in DAC. This is one of our many ongoing fundraising ideas we have to help the Philippines. We have an Applebee’s fundraiser this Wednesday and decided to give the proceeds to the Philippines Red Cross instead keeping it for P.A.R.E. We are also planning to have a food fest next week in Marillac as another fundraiser,” Gallego said.

P.A.R.E. seeks to educate its members and others of Filipino cultural values as well as spread awareness of current events in the Philippines. They embrace the Filipino heritage and share its traditions with the community, as well as strive to help the greater community through active service both within and outside of St. John’s University.

P.A.R.E is not standing alone in fighting the devastation caused by Haiyan either. Many organizations, such as the Marketing Club, Kappa Delta Phi, the Asian Alliance club, CCA and Pi Delta Psi, have already expressed their support and willingness to help out in any way.

“Everyone in school and other organizations ha[d] been eager to help us and asking us how they can donate,” Gallego said. “Organizations such as the Marketing Club have been asking local businesses if they can donate gift cards to raffle off. It’s amazing how many people want to help the Philippines and everyone has been a great help.”

Along with those student-run organizations, Campus Ministry has been in touch with the Vincentians and Daughters of Charity who are assessing the specific needs of those in their communities in the Phillipines, according to the University spokeswoman Elizabeth Reilly.

“We are awaiting further information on those needs and Campus Ministry will lead the SJU community in assisting in the response effort shortly,” she said. “The University community has been and will continue to pray for the victims each day at Mass on campus.”

Previously, P.A.R.E. began raising money for the earthquake that affected their country only weeks before Typhoon Haiyan struck the islands of the Philippines.

Audrey Prieto, president of P.A.R.E., said, “We had already started to raise money previously to donate for the earthquake by selling handmade loom bracelets, raising $180 in a single common hour.”

People in the Philippines are becoming desperate for basic needs such as water and food, and information as to whether loved ones are dead or alive. With sanitation now becoming a primary concern in the Philippines, the University along with P.A.R.E. will continuously work towards ways to help support what is said to be the worst storm to ever strike in history.

“The people hit the strongest were more of villagers. They don’t live in homes like us. Their homes are made out of tin, wood and not stable,” Gallego added. “As Filipinos, we have to come together as one and stay strong.”

Gallego quoted the Filipino President Benigno Aquino III, saying, “No typhoon can bring Filipinos to their knees if we’ll be united.”

This is P.A.R.E.’s website that contains all the fundraising events: http://sjupare.weebly.com

11/14 Donations will be accepted on DAC 2nd floor

All process will go towards the Typhoon Relief Fund.