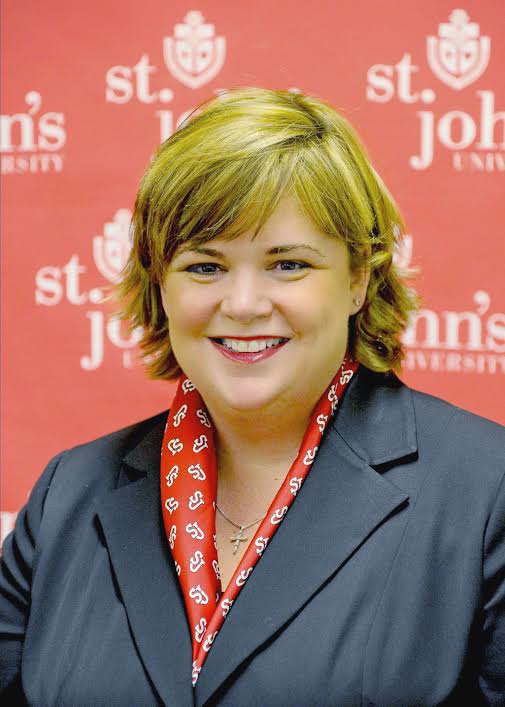 Pamela Shea-Byrnes was loved by both faculty and students alike.

The University mourns the loss of Dr. Pamela Shea-Byrnes, a longtime member of the St. John’s community, who passed away suddenly on Christmas Eve.

Now, the University remembers “Pam” for the boundless compassion she had for others and her commitment to service.

“It is with a heavy heart that we mourn the passing of Dr. Pamela Shea-Byrnes,” Rev. Joseph Levesque, C.M., President, said. “The University has lost a dear colleague and friend who was so much a part of the Catholic Faith and Vincentian Mission of St. John’s University. Her loyalty and dedication to her alma mater was inspiring during her 24-plus years of service to St. John’s.”

For almost 25 years, Shea-Byrnes life revolved around the Vincentian way and St. John’s, where she started as an enthusiastic undergraduate student majoring in Communication Arts and eventually earned her Doctor of Ministry from the Seminary of the Immaculate Conception. She last served as the vice president of University Ministry and University Events until flu complications led to her death.  She also met her husband Jeff at St. John’s, whom she has two children with, Kaitlin and Kevin.

There is a common denominator when talking about Shea-Byrnes: She was a woman of strong faith who wanted to instill it in others.

Tori Santagello worked with Shea-Byrnes extensively at Campus Ministry for over 15 years and saw firsthand what her friend valued. After all, it was Shea-Byrnes who gave her first shot as campus minster when she was a student.

“She wanted students to grow in faith and serve the poor,” Santagello said.

Santagello also recognized why students, faculty and alumni alike were so receptive to her.

“She always gave 100 percent of her attention to people,” she said. “She made people feel like they were her best friend.”

Senior Joseph Reis can attest to Shea-Byrnes’ resonating influence because of his involvement with Catholic Student Community and the President’s Society. To him, she was a mentor, teacher, source of encouragement and most importantly, a friend.

“She would remind me of the special gifts and talents I had that would enable to me succeed,” he said. “She even joked that she would hire me in the future. I feel like working underneath Pam would have been its own gift.”

While heading to the “Katie Couric Show” last November, Sheehan remembers how Shea-Byrnes, a former vice president of S.G.I. herself, gave her advice about managing student government duties.
She said people gravitated toward Shea-Byrnes because of her innate ability to make others feel at ease and invigorate their spirit.

“She was the type of person who makes you love St. John’s more,” Sheehan said. “She was [a] wonderful example on how to live the St. John’s experience.”

Robert Freglette, director of Blackman Dining Campus Services, saw a more tangible, charitable side of Shea-Byrnes when she organized events such as graduation, convocations, barbeques, alumni get-togethers and other University gatherings.

If a student couldn’t afford to return home for Thanksgiving or there were visitors on campus during the holiday, she knew what to do. “She would say, ‘Let’s get them some turkey’,” Freglette said.
“She made the day a little bit easier for people” he said. “Made sure all the bases were covered.”

Aside from her main duties at the University, she founded the Vincentian Initiative to Advance Leadership, a four-year developmental program integrating the best of corporate leadership training with Vincentian values, and the Catholic Scholars program, which assists students in developing leadership skills as they prepare for their future. She also served as a member of the Board of Directors of St. John’s Bread and Life.

Her impact on the University didn’t go without notice; she was awarded the President’s Medal in 2004. Along with her husband Jeff, she won the Johnny’s Angels Award for her work with Bread and Life.
From the many anecdotes and accolades that paint a portrait of Dr. Pamela Shea-Byrnes, perhaps Dr. Robert Mangione, the University Provost, summed up who she was best.

“The room was always better when she walked in,” he said. “She was St. Vincent de Paul among us.”