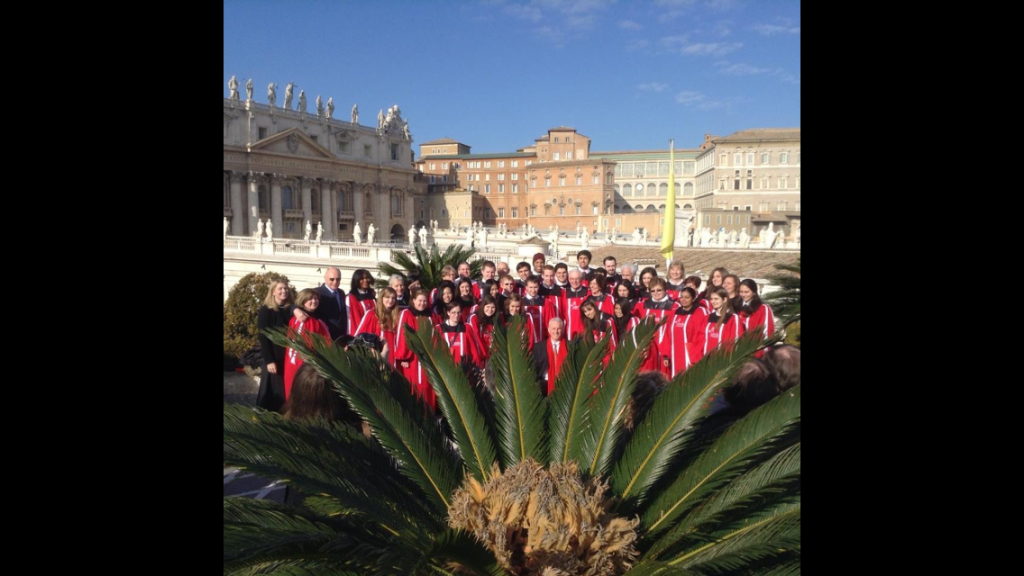 Draped in their red robes and black stoles on New Year’s Eve, the St. John’s Mixed Chorus stood in rows in St. Peter’s Square with their heads high and mouths wide open, their melodies ringing out for all to hear– including Pope Francis.

While the group sang, “Hark the Herald Angel Sing,” the Holy Father appeared.

“He smiled, pointed right at us, and gave us two thumbs up,” sophomore Jimmy Pierce, the Mixed Chorus vice president said. “It was a once in a lifetime moment and I’m still in disbelief that it happened.”

As a young Catholic, Pierce said the entire experience was very moving for him.

“To have him acknowledge us in any way was emotional for me,” he said. “And I believe that all of us who went on that trip will remember that moment for the rest of our lives. “

The trip to Vatican City for the St. John’s Mixed Chorus was months in the making.

Spearheaded by Kim Ole, the director of the Mixed Chorus, the 62-member group, which included faculty, alumni and chorus members, spent Dec. 27 to Jan. 4 touring Italy and singing. They stayed on the Rome campus and set up their Italian adventure with the tour company Peter’s Way. Ole said the company’s specialty is taking choruses on pilgrimages to Italy and the Holy Land.

On New Year’s Eve morning, Ole sat in the office with someone from Peter’s Way. The Mixed Chorus planned on signing for the Papal Mass on Jan. 1.

But then, the Vatican called. The Pope was having a surprise visit to bless the crèche in St. Peter’s Square and they needed a chorus there. Ole happened to be in the right place at the right time and he said their group would do it.

Within two hours the St. John’s Mixed Chorus had their robes on and were ready to sing. Little did they know, they would just be a few yards away from the Holy Father in Vatican Square.

“He was right there,” Ole said. “He was listening and gave us two thumbs up.”

The group finished off the night by ringing in the New Year watching fireworks from the Spanish Steps.

The Mixed Chrorus sang twice for the Pope, once at the New Year’s Eve mass and once on New Year’s Day. They also sang for a normal mass at the Vatican, as well as singing in Vatican Square.

“Singing is something that has meant so much to me for so long. I have been singing my whole life and it has given me so much,” Pierce said. “It has become one of my true passions. And that’s what made this tour so amazing. Singing every day in some of the nicest cathedrals in the world with great friends for the school that I love, is something that can’t be beat.”

Ole said in addition to singing for the Pope and getting to experience all Italy has to offer, it was nice to see all of the students, alumni and faculty bonding.

“They had a great time,” he said. “They learned so much and they enjoyed each other.”

The group also traveled outside of Rome. They spent two days in Florence and spent an afternoon in Assisi where they sang a mass in the lower Basicilla of St. Francis. They also had their own full concert in Church of San Lorenzo in Piazza San Lorenzo.