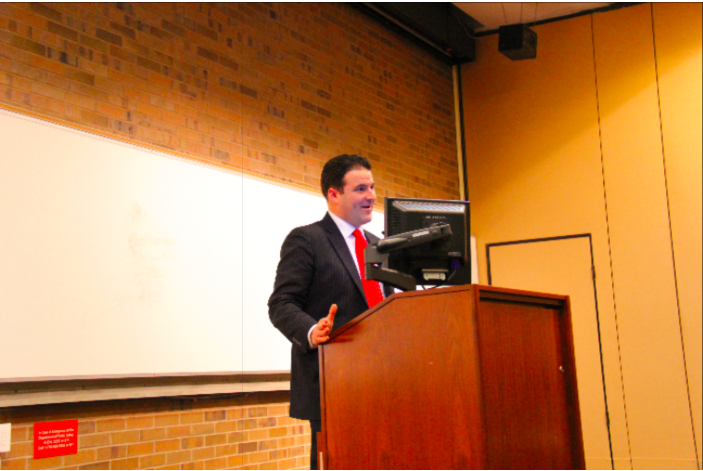 The forum ranged on varying topics, focusing primarily on Rovell’s opinions on current issues in the sports world. The ESPN sports business reporter was also asked for his thoughts on the IMG buyout, effects of bad publicity for the Sochi Olympics and the upcoming Super Bowl.

Rovell’s advice for prospective journalists and sports management majors consisted of urging them to be different.  He advised students to “put everything in a box because no one throws out a box without first opening it.”

Ultimately, emails could be deleted but something physical, such as a resume mailed in a box Rovell said, would stand out.

He also advised students to find internships and jobs that would add skill sets to their resumes, and not be there to simply look attractive.

As an example, he told the story of not knowing the rules of grammar as a freshman at Northwestern University. In order to teach himself, he began interning for the PCP Sports Marketing Media. He spent his summer editing programs for upcoming games. The experience had not only added to his resume, but also taught him a necessary skill for his career.

While at the University on Thursday, Rovell made sure to not only speak in front of a public audience, but also made appearances to speak in a sports management class and at WSJU radio.

Students went to see Rovell for a multitude of reasons.

Senior Conner Quinn, president of the Sports Management Association, stated that the appeal for him was being able to see “a leading expert, if not creator, of sports business reporting.”

Others, such as Dane Holt, a graduate student, gathered expecting a session more geared towards advising college students on how to find success in fields such as sports management and journalism post-graduation.

While Holt agreed it was a great experience, he felt it was not entirely beneficial for students like him.

“A lot of advice was provided on the industry,” he said. “But we’re not part of the industry. I thought it would be more geared towards how to get in.”

Mike Repole, a ‘91 alumnus and former owner of Glacéau, is credited with inviting Rovell to speak.

“As a St. John’s graduate, it is great to bring people in who are doing their trade at a very high level,” he said. “It is a great opportunity for students to learn firsthand from someone who is experienced in what they would like to do