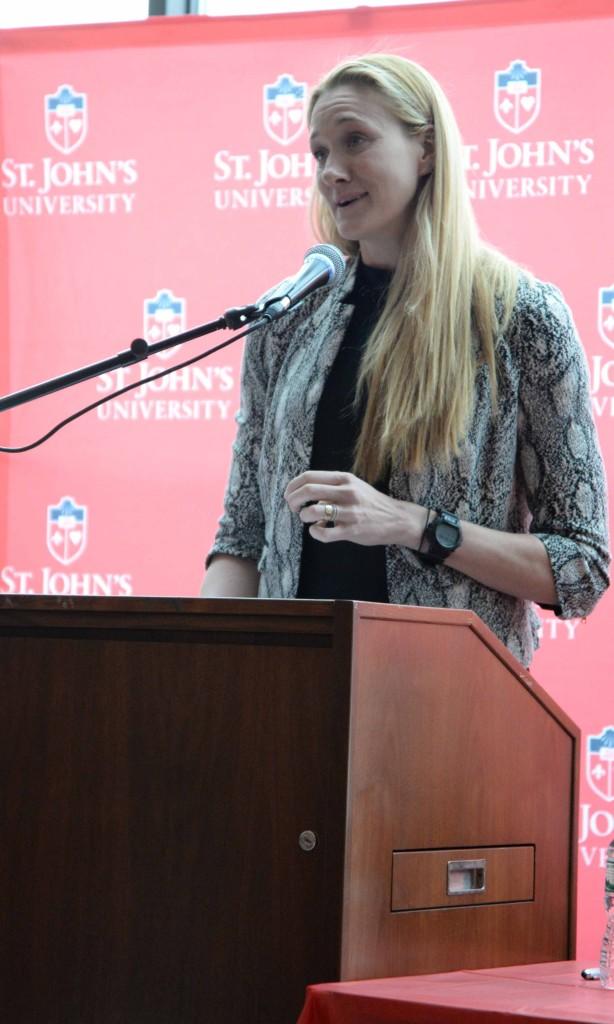 More than 40 years after the Title IX law where Congress barred gender discrimination among educational institutions receiving financial aid, the University took the date to commemorate the achievements of female students within the community.

Professional beach volleyball player Walsh Jennings spoke at the formal gathering in Marillac Terrace and stressed the importance of seizing the day.

She said Title IX was more than an equal opportunity for women in sports, but a chance to demonstrate what they’re about individually.

“It’s not the way you carry it, it’s how you carry it,” Walsh Jennings said. “Everything you need is inside of you.”

She played volleyball at Stanford University for four years and later as part of the U.S. Olympic team starting in 2000. Along with her partner Misty May-Treanor, both accumulated three gold medals (Athens 2004, Beijing 2008 and London 2012), losing only once throughout a 12-year stretch and are widely considered as one of the best beach volleyball teams of all time.

Walsh Jennings also spoke about her family’s instrumental role in her development as an Olympic athlete. Both her parents were athletes and influential with her sports career, but her mother taught her the importance of living with high moral character.

Brian Moloche, a junior in the ROTC program, admired Walsh Jennings’ tribute to her roots.

“You can’t do anything without family,” Moloche said. “You always need someone.”

“As a student leader and female, it’s very important for females to be highlighted in a positive way,” Gander said. “It means so much more when an outsider comes and brings a refreshing perspective.”

Mairead Carr, a junior, marveled at how personable and real Walsh Jennings was.

“She was very encouraging,” Carr said. “You need to be well rounded to be successful.”

One of the honorees of evening and women’s soccer player, Lauren Ferris, won an award for her contributions and partipation in athletics and University community.

“It’s a great culmination for the hard work I’ve done here.” Ferris said. “I couldn’t have done it without my family, coaches and teammates.”

As for Walsh Jennings, being a mother of three hasn’t stopped her training toward the 2016 Summer Olympics in Brazil.

“I get the question as to why am I still competing. When it comes down to it, my heart is still in it,” she said. “I love being a working mommy. I love chasing my dreams alongside my family and my husband.”

Aside from sports, her family goes to the beach and practices dancing during their leisure time. While Walsh Jennings and her kids haven’t tapped their feet to samba yet, she is currently learning Portuguese through Rosetta Stone.

“I love that [Brazilian] culture,” she said. “My goal is to beat them down at home.”