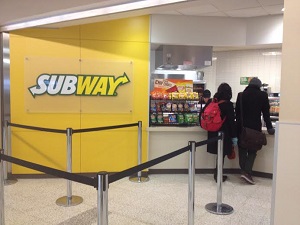 The University’s Subway franchise has removed a chemical used in their bread various that media reports have said is found in yoga mats, synthetic leather and shoe rubber.

Azodicarbonamide (ADA) is a common ingredient approved by the FDA used as a food additive for bread improvement that is commonly used in fast food chains, restaurants, and supermarkets, according to Subway’s website.

Resident General Manager of Campus Dining, Michael Gulczynski, told the Torch in an email that ADA is safe, but the Subway in Marillac Hall is removing it from its bread.

“This process began last year and is nearly completed — we have already developed an improved bread formula, conducted extensive performance and consumer testing on it, and pending final government approvals we should complete the entire conversion process within the coming weeks,” Gulczynski said.

According to Subway, it started removing azodicarbonamide in 2013 and will complete the conversion in the coming weeks.

Subway is not the only food chain to use ADA.  It is commonly used in popular chains such as Starbucks, Wendy’s, McDonald’s, Arby’s, Burger King and Dunkin Donuts, Subway’s website said.

“It’s a good thing and it pressures other fast food places [in] the way they make their food,” Mui said.

Freshman Falisha Walcott said that ADA’s removal will have students thinking about what they eat.

“I think this change will start to make people think what is in our food,” she said.

The product may be approved in the U.S., but has been banned in Australia and Europe, according to the FDA. Starbucks has been in the process of eliminating ADA from all of their products.

“Single or multiple restaurants, such as Subway, are placed on campus to provide variety, balanced offerings, and meet the needs and desires of students,” Gulcynzki said. “We take into consideration various items that are important to students to ensure satisfaction, including the cuisine offered, service style, and pricing, just to name a few.”

“Campus Dining Services are working to accommodate the needs of the students, by providing what is important and ensuring satisfaction to the students,” Gulczynski said. “The safety and health of every guest is our highest priority.”

The Director of Media Relations, Elizabeth Reilly said in an email, “The University is working closely with Chartwells on this matter and reminds students to visit http://www.dineoncampus.com/stjohns  to share feedback on their campus dining experience.”