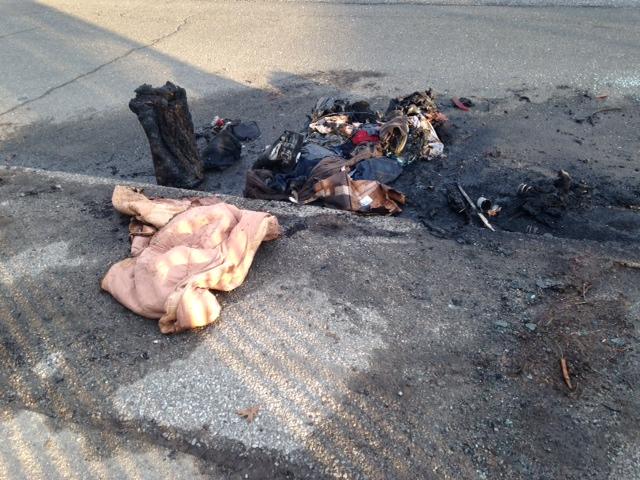 Charred remains at the scene of the fire near the gate behind Hollis Hall. Photo: Talia Tirella            A vehicle belonging to a non-St. John’s student caught on fire on the Grand Central Parkway service road behind Hollis Hall this past Tuesday at approximately 5 pm.

According to Tom Lawrence, Vice President of Public Safety, two non-St. John’s students, a male and female, were riding in a 2007 black BMW going westbound on Grand Central Parkway when the vehicle began to experience engine trouble.

The operator of the vehicle pulled over at the 168th St exit and parked the car at the curb near the gate behind Hollis Hall.  The operator then tried to diagnose and fix the problem when the vehicle caught on fire.

Lawrence said that FDNY Ladder #125 responded and extinguished the fire.  FDNY then determined that the cause of the fire was mechanical.  The vehicle was then removed from the scene after the fire was extinguished.

Lawrence also said that due to the immense amount of smoke that blew into the resident village, Public Safety was prompted to send an emergency text and voice message informing members of the university about the source of the smoke. The message also warned students and faculty to stay away from the scene so FDNY could safely extinguish the fire.

No injuries or damage other than that done to the vehicle was reported.