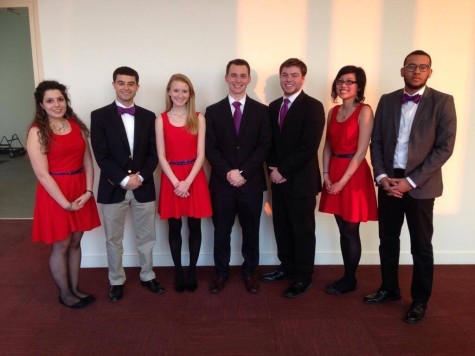 With approximately 750 to 840 votes for each candidate, Robert Koehler and his FRESH ticket swept this year’s Student Government, Inc. elections. Every candidate won his or her respective seat within S.G.I.

Next year, Koehler will be president, Caroline Zottl will be vice president, Justin Alick will be treasurer, Domenick Luongo will be secretary,  Ada Lee will be senior senator, Jared Bowman will be junior senator and Chiara Muiccio will be sophomore senator.

Koehler is grateful to voters for their support. “Their votes reassure us that we have the same vision as the majority [of students] who came out and voted,” Koehler stated. He went on to say his ticket would continue the promises they made while campaigning.

Each member of FRESH is looking forward to having the opportunity to impact all students in a positive way. They have plans in the works that have a focus on student involvement and creating a community environment here at St. John’s, the newly elected ticket said.

Muiccio said, “We really can’t wait to get the ball rolling.”

During their first 100 days in office, FRESH hopes to solidify committees within S.G.I. for the upcoming year. In the spirit of helping student organizations, a main aspect of their platform, they have already started working on an application for leaders within organizations. Koehler also said that by May they will be able to see what exactly they will be able to do on campus. “We are holding ourselves accountable in a number of different ways, and we can’t wait to make individual relationships with students that will help to create a successful S.G.I.,” said Koehler.

Several of the individual members have distinct plans for their time in office. Koehler seeks to incorporate the student body within S.G.I., and looks forward to seeing exactly where he can take his administration. One of his main goals is to cultivate a feeling of community at St. John’s, and he looks forward to watching this community grow.

Zottl feels similarly, agreeing with Koehler on the point of cultivating a tight-knit community on campus. Muiccio looks forward to getting to know the students better, and letting them know who S.G.I. is and what they can do for the student body.

Koehler stated that Luongo, who was not present for comment, is eager to establish a line of communication to the student body, informing them of what S.G.I. is doing at all times.

Alick said that, as of now, there is no determined release date for the budget, but it will be “as soon as possible.” FRESH will work on the budget over the summer break. Zottl added that they are currently asking all student leaders of organizations about their budgets in order to get an idea of how to better allocate funds next year.

Slight scandal rocked the campaign when they received a strike from the Elections Committee, according to Elections Committee Chair Monet Zaccarelli. Strikes are typically given for the use of illegal campaign tactics. “We respect the committee’s decision, but we don’t necessarily agree with it,” Koehler said of the stike. The members of FRESH all agree that their campaigning techniques were effective in getting a large number of votes. Koehler said that their technique involved dedication to listening to the demands of the student body and being visible within the community in order to have their faces known. Zottl and Muiccio added that it was important to them to sit down with students and explain what FRESH stood for while making personal connections with students.

Bowman added that FRESH placed a focus on the issues that affect the St. John’s community as a whole, asking students what issues they face right now. Bowman said that FRESH would keep these issues in mind and continue to work on solutions.

Jennifer Rankin, who ran for president on the IGNITE ticket, did not get the votes she needed to be elected, and neither did the rest of her ticket.

Rankin commented on the results and said, “I’m more worried than I am upset.  I don’t see student government being as good as it could be [next year].” Rankin also said that she feels that an entirely new batch of people in student government may hurt organizations and students more than would help them.

“It’s hard, because we deal with a huge budget and with so many organizations who want a part of it.  It’s going to be interesting because they’re so different from what we’ve had and I don’t know if that’s a good thing,” Rankin said.