Real Housewife Speaks At ‘Light It Up Blue’ 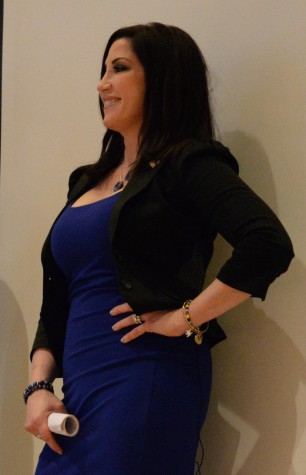 The University hosted a Light It Up Blue for Autism event in Marillac Auditorium this past Thursday in order to raise awareness for Autism Speaks.  The guest speaker was from “The Real Housewives of New Jersey.” Laurita spoke about her experience with her son’s autism.

The School of Education hosted an all-day event for Light It Up Blue, starting with a Mass in St. Thomas More Church, followed by a speech from special guest Laurita.

Laurita became a spokesperson for Autism Speaks when she found out about her son’s diagnosis.

Autism Speaks is an organization dedicated to funding research to find the cause of autism and increasing awareness of autism spectrum disorders.

Lauren Ippolito, a sophomore involved in the planning of Light It Up Blue, admired Laurita’s speech.

“She did an amazing job with presenting that within her speech today, with regards to the preparations to Light it Up Blue,” said Ippolito.

Ippolito mentioned Dr. Pamela Shea-Byrnes, who recently passed away, and her involvement with the Light It Up Blue event.

“Pamela Shea-Byrnes was originally the one who started the group here at St. John’s,” said Ippolito. “When she was here, Pam was very close to my heart, so I knew I had to be a part of this event.”

Laurita said that her older children, Ashlee and CJ, have been supportive and patient with her son Nicholas’s diagnosis, but CJ’s support is what she admires.

“CJ doesn’t judge other kids,” Laurita said. “He’s very open and loving to everyone and I think that’s from being around his brother.”

Laurita announced that, because her time with “The Real Housewives of New Jersey” is over, she can spend more time with her family and writing books.

Laurita mentioned how autism affects her and her family’s day-to-day lives.

“Our whole environment has changed,” Laurita said. “It’s so easy for it to consume your life and become your world, but you have to remember the things that you are passionate for.”

She spoke on how the effects of Nicholas’s diagnosis brought positive views.

“It affects your life in a good way, makes you appreciate things in life,” Laurita said.

Suzanne to help research causes and raise awareness of autism, which led the United Nations to the declaration of April 2 as World Autism Awareness Day.

Autism Speaks advocates for the needs of people with autism and their families.

“All the proceeds that are given throughout the month of April will be going to Autism Speaks,” Ippolito said.