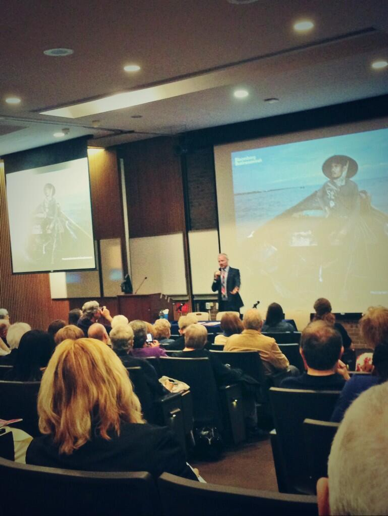 For many, the term slavery only exists through history lessons or stories handed down by others. Many more believe that because of the abolishment of slavery in America, human society has seen an end to this monstrous system of the bloodiest form of human labor.

“The $$$ and Sense of Modern Slavery” conference organized by the Vincentian Center at St. John’s gave the University community an opportunity to engage with and learn more about this urgent modern issue of social justice.

E. Benjamin Skinner, keynote speaker and author of “A Crime So Monstrous,” gave a presentation to a packed auditorium about human trafficking across the globe and a personal account of his experiences as a journalist.

Skinner adopts Kevin Bales’ definition of modern slaves: “human beings forced to work, under threat of violence, for no pay beyond subsistence.”

Bales is the author of “Disposable People: New Slavery in the Global Economy.”

In terms of this definition, we are living amongst the largest number of slaves in human history. An estimated 27 million people are slaves, and in Asia alone there are about 10 million forced laborers, according to the 2005 International Labour Organization’s report.

Skinner also pointed out that according to UNICEF, there are approximately 300,000 child-slaves in Haiti, and one can negotiate the price of a 10-year-old girl or boy for domestic labor or as a sexual partner for only US $50.

Skinner’s talk was followed by panels of experts who elaborated further about the intersection of modern slavery with economic analysis, theological perspectives and praxis.

The speakers pointed out that most of us who live in developed countries are “detached consumers who don’t know and don’t ask questions” about how and from where our products come.

“We have a relationship with our products but no relation to where and whom it came from,” said Christopher Vogt, an associate professor of theology and one of the presenters.

Vogt defined the term “social sin” as “collective action and inaction that leads to injustice and dehumanization,” that it’s our moral responsibility to make changes, and “social sin requires us to have a personal conversion to recognize [social sin] does exist.”

The issue of climate change is also linked to human trafficking.

“Deforestation in the Amazon is tied to forced labor in Brazil,” said Charles Clark, a professor of economics, answering a student’s question regarding possible impact of climate change on modern slavery.

Models of economic fairness and practices were also discussed at the conference by speakers Patricia Daly O.P., Valeria Treves and Katherine Combellick. Treves, executive director of New Immigrant Community Empowerment, showed that undocumented workers are at very high risk for exploitation and trafficking. Also, farm and domestic workers are excluded from protection laws.

When asked about what students could do, Daly encouraged students to ask about their universities’ investment portfolios and check websites such as behindthebrands.org or slavefootprint.org for information about the products, as well as their relationship with slave-labor.

A quick check on either site would show startling results, as they indicate how much slave-labor is used without our knowledge to make products we use daily.

The conference ended with students, faculty and staff taking pledges to be informed consumers and promising to take action to end human slavery.