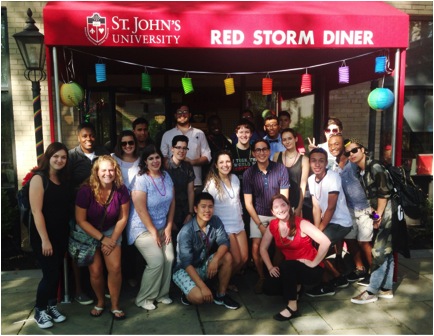 As new members and allies of the Lesbian, Gay, Bisexual, Transgender, and Queer/Questioning (LGBTQ) community prepared for a new school year, the SPECTRUM Initiative leadership team was busy organizing a small surprise for them. On Thursday, Sept. 4, SPECTRUM, a working initiative comprised of students and St. John’s administrators, hosted its second annual Welcome BBQ event for students and allies. However, this was the first time the event was included in the University’s Week of Welcome series of events.

The BBQ, which attracted more than 50 students, faculty and staff was successful in terms of community outreach. This number also reflected a growing presence of LGBTQ members and allies at St. John’s. Furthermore, it was a big step forward considering the history of struggle and advocacy for LGBTQ rights at this university.

Following a series of protests and petitions for an official “Gay-Straight Alliance” on campus which has been more than 20 years in the making and has attracted national attention, the University began to slowly initiate programs such as SAFEZONE training and HOW YOU DOIN’? meetings in order to address LGBTQ students’ needs and concerns. However, students have previously voiced dissatisfaction, and said that these activities have not addressed the critical and real issues they are facing. With SPECTRUM, things may change for the better.

Graduate student Oscar Diaz, who has been involved in SPECTRUM from the very beginning, said, “With four pillars – support, education, faith and service – SPECTRUM aims to create a supportive learning environment for LGBTQ members so they can grow professionally, intellectually and feel at home at the same time.”

For each pillar there will be an administrator working closely with the student leaders to meet the University’s mission and core values. LGBTQ students and allies will have more opportunities to be directly involved in planning and execution.

Many students at the BBQ showed their excitement. “I wish to have had events like this my freshman year,” said senior Kevin Kiprovski, who is studying biology with a minor in linguistics. “We finally have an opportunity to have a serious venue to address issues LGBTQ youth are facing,” he added.  Among sexual abuse, mental and physical bullying and violence, Kiprovski also pointed out the unusually high number of homeless LGBTQ youth. In fact, according to the latest data from the Center for American Progress, there are currently between 1.6 and 2.8 million homeless youth in the United States, 20 to 40 percent of which identify as lesbian, gay, bisexual or transgender. This number is disproportionately high as compared to only 5 to 10 percent of the overall youth population.

There are many social justice issues that members of the LGBTQ community face daily, and many students hope that SPECTRUM will provide an opportunity for them to address these problems. “Vincentian values aim to empower the poor and the oppressed, so we cannot just say ‘Vincentian only works for straight people,’” said Kiprovski. As SPECTRUM hosts more upcoming events this school year, members of the St. John’s community will have more opportunities to get involved.