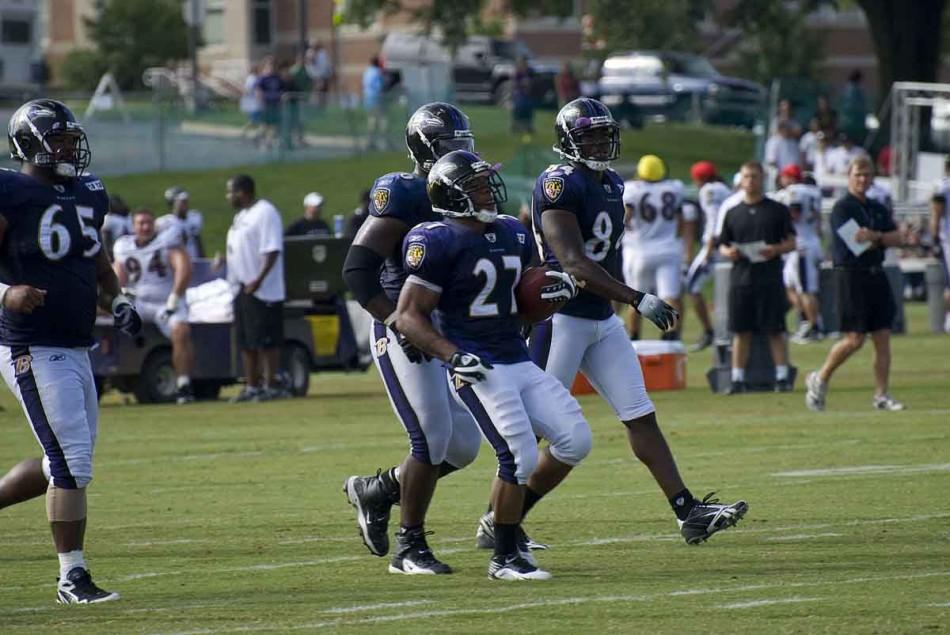 Ray Rice, center, the Baltimore Ravens running back, who was suspended indefinitely from the NFL. Photo: Wikimedia Commons

Throughout the past two weeks, the N.F.L. has undergone intense scrutiny over the high profile abuse cases involving Ray Rice, Jonathan Dwyer and Adrian Peterson. Responding to the headlines, N.F.L. Commissioner Roger Goodell has been requested to resign by the public, and fans have quickly started to form lengthy lines at the Baltimore Ravens’ M&T Bank Stadium to exchange Rice’s jersey for a different player’s.

With these cases recently emerging into the public eye, the media and the public are raising questions against the N.F.L., asking why actions weren’t taken earlier, and questioning the  severity of the actions taken.

“Any professional sports league has any kind of responsibility, how young people look up to these players, they have to go above and beyond with it.” said Glenn Gerstner, director of the graduate sports management program. “

After hiding out for more than a week, Goodell expressed his apologies in a press conference on Friday and announced the formation of a personal conduct committee for the N.F.L. by Super Bowl Sunday in February.

More so, Goodell promised to team up with the National Sexual Violence Resource Center and the National Domestic Violence Hotline, and implement educational training for players.

However, most remain unsatisfied with how the N.F.L. is handling the abuse cases. From reactivating, then deactivating Adrian Peterson’s play, to sheltering Ray Rice’s domestic abuse case, just examples of the habitual neglectful behavior recently uncovered.

The Cardinal’s Dwyer was deactivated from all team activities after physically abusing his wife for refusing his sexual advances, but according to MSNBC, he will continue to receive pay.

“The cover up is always going to be the problem,” said Conner Quinn, a graduate student studying international communications with a bachelor’s degree in sports management.

“When such a thing happens, it brings on such a bad rep for the team itself,” said Perrier. “They do need to step in and play more of an Uncle Sam figure,” she continued.

As for the players, Quinn doubts they will be able to make a comeback someday. “Some of their careers are probably over. Ray Rice and Adrian Peterson are two of the best running backs in the league,” he said.

Nonetheless, if he had to pick one to possibly return, he would guess Peterson. “Although he has been indicted, there is no actual footage of him beating his child,” Quinn continued.

Gerstner believes the players will one day be able to reappear, citing to the return of Jets quarterback Michael Vick after he was charged with illegal dogfighting back in 2007.

“Over time, it will become less and less of an issue,” said Gerstner. He continued, “Time will heal all wounds.”