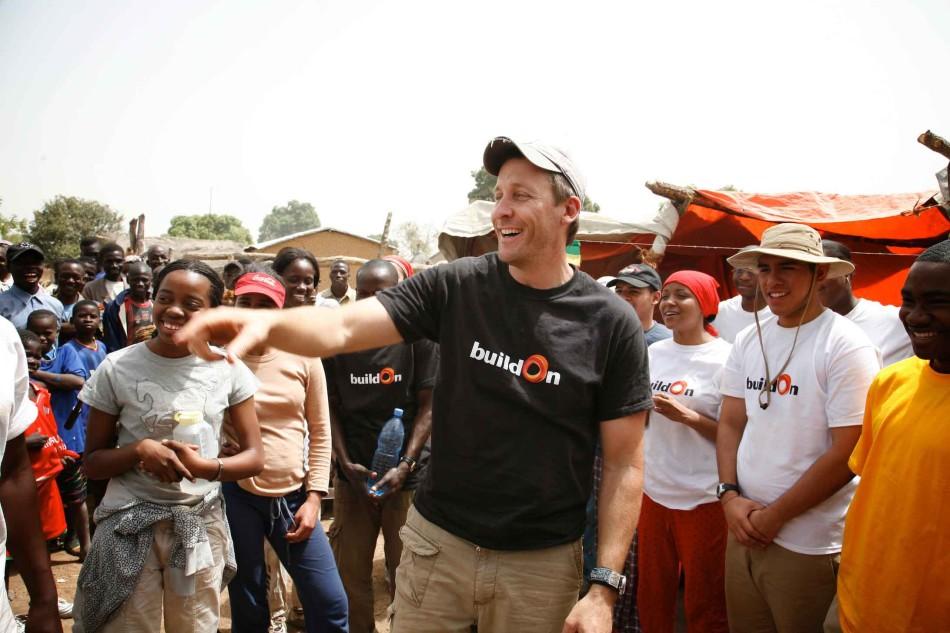 Jim Ziolkowski, middle, the founder of buildOn. Ziolkowski said that buildOn is not a charity, but a movement, with a focus on education. Photo: Srijan Tamraaz, buildOn

His first brush with poverty took place while visiting a village in Nepal during a backpacking expedition after graduation.

“I passed through a village [in Nepal] where they were celebrating the opening of a school, and it was a two-day celebration,” Ziolkowski said. “I got there on the second day, and it was raining. They were dancing in the rain and the mud, [and] you just got a sense for the hope and the determination they had around education, around the power of education to break that cycle of extreme poverty.

“I was moved by that, and at most a seed was planted.”

Ziolkowski then took a job at GE working in corporate finance before realizing his calling to work with those who were poverty-stricken. After leaving the corporate world, he began working with schools and buildOn was formed.

“I was completely overwhelmed by the injustice of extreme poverty,” Ziolkowski said. “To me, it was insanity and I didn’t know how to deal with it.”

Ziolkowski spoke with the Torch about his organization, his methodology and his beliefs in an interview before his standing-room only presentation in Marillac Auditorium at St. John’s as part of Founders’ Week on Sept. 23.

The main focus of buildOn is to bring about equality through education.  The organization achieves this by using education to break the poverty and illiteracy cycles, as well as the dropout crisis.  “We want to get students engaged and pull them out of those cycles,” Ziolkowski said.

buildOn uses the same methodology in every country it does work in.  “It involves not providing benefits and services, not building schools for the community members… We are not a charity, we are a movement,” Ziolkowski said.

buildOn encourages the development of leadership communities that are put in charge of building and maintaining schools. Every time buildOn works with a community, they make sure all members sign a covenant, which is a contract that states their promise to not only supply all labor needed to build and maintain the school, but to also send their daughters.

Ziolkowski explained how the covenant with communities works. “They’ll [sign with a] thumbprint, because 90 to 100 percent are completely illiterate.  So they sign a covenant committing all the unskilled labor to build the school, and to sending their daughters in equal numbers with their sons.  Only after every villager signs that covenant will we break ground,” he said.

Ziolkowski believes that the cycle of poverty cannot be broken without equal access to education for all. This is why buildOn’s push to send girls to school in equal numbers with boys is so important to communities overseas. Ziolkowski said that many of the countries they work in have gender discriminatory practices in place, such as arranged marriages and female genital mutilation. He sees education as an effective way to break out of the cycle of discrimination and create equality.

buildOn was not started with a specific place in mind.  Ziolkowski said that living in Harlem and witnessing the cycle of poverty there motivated him to develop buildOn both domestically as well as internationally. Their main goal is to empower youth and build schools, both of which will break the destructive cycles of prison and poverty. He has also found that involving kids in other countries produces a positive impact on both sides.

“They feel value, that somebody would come from the other side of the world to spend time living in a mud hut, sleeping on the floor, working side by side with them to build a school, and our kids, it’s completely mind-blowing for them. When they’re in these villages and they see how hard people are working towards education to build schools, they see the value of education, and then they see what they can accomplish, that they have effectively helped change the future of a community by building a school. It changes who they are and they bring it back and it becomes contagious,” Ziolkowski said.

When working in communities abroad and in the U.S., buildOn focuses on giving communities the resources and help they need, but does not take complete control of the process. Ziolkowski feels that it is important for communities to set their own guidelines in terms of labor used for building, what curriculum to use in the schools and how to design schools.  “We strongly believe that it is not our right, or our position, to be developing curriculum for the communities, to be doing teacher trainings… We want it to be completely congruent with their culture, we don’t want to project our standards or our traditions on them, coming from the west,” Ziolkowski said.

Ziolkowski said that the organization checks in periodically with the ministries of education, but not to interfere with their work.  buildOn always wants to put each individual community at the forefront and empower the community to make changes. “The students lead [in the U.S.], and the community members lead overseas. If we needed to be in those villages helping to sustain those schools, we would’ve made a big mistake. We don’t want to create those dependencies and co-dependencies.”

Ziolkowski is a devout Catholic, and said that religion plays an important role in his life. He believes in the pillars of social justice but is also influenced by other religions like Tibetan Buddhism. He’s even spent time with the Dalai Lama.

“My faith has definitely gotten me through the toughest, darkest times and it has helped me to understand what I need to do and what I’m responsible for, and it has given me strength to keep going when I’ve wanted to quit and give up,” Ziolkowski said.

If you’re interested in helping buildOn, send an email to [email protected] and you’ll be connected to the St. John’s chapter. Ziolkowski said that a substantial partnership is being formed between St. John’s and buildOn, and that a vibrant chapter is being established here at the University. Students can become mentors and help out in local communities such as Crown Heights, and even travel overseas to help build schools. “We’d love to have you,” Ziolkowski said.