Last ceremony was in 1989; Conrado ‘Bobby’ Gempesaw will officially take office on Friday 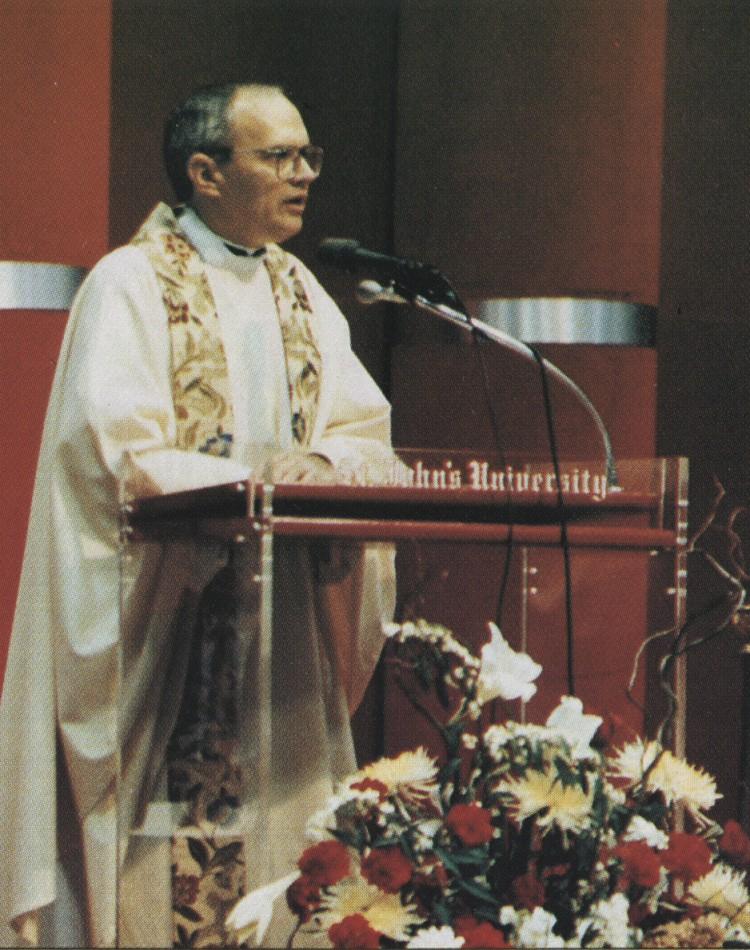 Fr. Harrington delivers the homily during the Mass at his investiture in 1989. Photo: University Archives

St. John’s University will celebrate the investiture of Dr. Conrado “Bobby” Gempesaw as its newest president on Friday, Oct. 24, with a Mass in Taffner Field House, an academic ceremony in Carnesecca Arena and an evening reception.

“The St. John’s community looks forward to this significant event in the University’s history,” Peter D’Angelo, chair of the University Board of Trustees, said in an emailed invitation.

Gempesaw, who officially took office on July 1, is the 17th president of the University and the first who is not a priest. Previously, he was provost and executive vice president at Miami University of Ohio.

What is the investiture?

The investiture is significant because it represents Dr. Gempesaw’s assumption of the formal powers of the office of the president, according to University representatives. While his presidency began in July, on Friday he will be officially installed and announced as the new president.

“It’s the ceremonial mark of the start of his tenure,” said a University representative.

St. John’s University has not hosted a formal investiture in 25 years, since that of the Rev. Donald Harrington in 1989. One-year interim president the Rev. Joseph Levesque, who is expected to attend Friday’s ceremony, incorporated the investiture ritual into 2013’s Vincentian Convocation.

Around a thousand people were expected to attend the three events, as of Oct. 17.

What will happen on Friday?

The day will begin with seating for the Mass in the arena at 12 p.m., and the service will begin at 1 p.m. At 2:30 p.m., guests will be seated for the 3:30 investiture ceremony. The reception will take place directly after the ceremony, around 5:30 p.m., and there will be a hospitality area in Marillac Terrace between the Mass and the ceremony.

The ceremony will begin with a processional led by grand marshal Jack Clarke, Tobin College of Business, a faculty member chosen by the provost for extraordinary service to the university. Following Clarke will be deans, students, alumni and faculty members representing each college based on its size; the President’s Society, an elite group of seniors chosen each year to serve the Office of the President; and approximately 40 representatives from other universities.

The ceremony will include musical performances from students, the presentation of the colors and national anthem by St. John’s ROTC students, the reading of the investiture text used for every president of the University, and the singing of the alma mater.

Who will be attending?

Bishop of Brooklyn Nicholas DiMarzio will be the principal celebrant and homilist at the Mass.

The faculty, students and alumni of St. John’s will each be represented by a speaker at the ceremony, as will the academic and religious communities.

Notable guest speakers include the presidents of Adamson and DePaul universities, Provincial of the Vincentian Community and St. John’s trustee Rev. Michael J. Carroll, and Archbishop Bernardito Auza, the papal nuncio to the United Nations.

Dr. Gempesaw has already received letters of congratulation from figures including other university presidents and Cardinal Timothy Dolan, which will be on display during the reception.

The investiture will be heavily symbolic. Gempesaw will wear the St. John’s presidential academic regalia, a “distinctive red robe,” according to a press release. The president will also wear a doctoral cap and hood representative of his alma mater, The Pennsylvania State University, which will be switched to St. John’s garb during the ceremony, a University representative said.

Another symbol is the University mace, a 39-inch, 5-pound club representing the “power of higher learning,” according to the Office of the President. The mace was created in the early 1960s and will be carried in the procession. The mace is decorated with symbols based on the iconography of the University’s patron saint, John the Baptist, including the University crest, University seal and the Seal of the Congregation of the Mission.

All members of the University community are invited to attend the events, which will also be broadcast live on the University website at stjohns.edu. Those who wish to attend should respond by this evening, Oct, 22, online or by calling extension 3118.