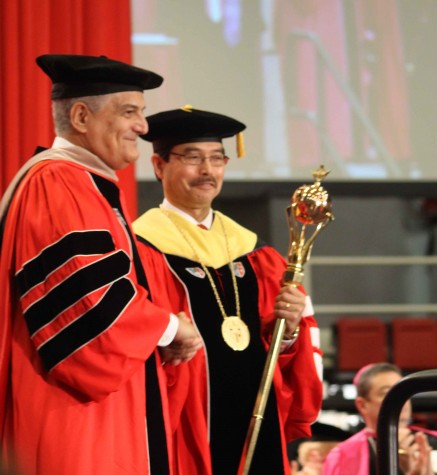 New president Dr. Conrado “Bobby” Gempesaw envisions improving St. John’s University by expanding its community and global presence, continuing its promise to provide a top-notch education for students who may otherwise not have one and upgrading learning and teaching environments.

That was the message he gave the University community during his investiture speech last Friday at Carnesecca Arena.

Speaking before an estimated crowd of a thousand, Gempesaw outlined four priorities that he plans to focus on over the next five years. These priorities came to his attention during his listening tour with members of the University community, including alumni.

He said that during the tour he received feedback about what St. John’s needs to do going forward.

“Many of you strongly expressed that we must, must, elevate St. John’s pride and tradition in academic and athletic excellence to the next level,” Gempesaw said.

The four priorities are: providing access and ensuring student success; recognizing and retaining outstanding faculty and staff; improving teaching and learning environments in order to foster student success; and expanding both community and global partnerships.

Gempesaw said that these priorities will ensure that the University grow stronger over the years. He said that this week he will announce a strategic work group, which will provide guidance when it comes to implementing the priorities over the next five years.

“Although the challenges in higher education today may seem daunting, St. John’s University can overcome them and continue to try, as one of the country’s premiere Catholic universities. We must face these challenges with a dynamic, entrepreneurial and strategic mindset,” Gempesaw said. “For St. John’s University, there is no choice, we must be bold.”

Gempesaw has strong plans going forward, and draws inspiration from his background as an Filipino immigrant.

“Embracing the Vincentian mission is easy and natural for me, because, like so many St. John’s students, both today and in the past, I am an immigrant,” Gempesaw said.

Gempesaw spoke about his commitment to continuing the University’s mission to educate immigrants and children of immigrants, the mission that has been the University’s focus since it began. The Vincentian nature of the University involves helping those who are in need, and St. John’s uses this idea, along with a faith- and values-based education, as the center of its mission.

“I have always considered it a privilege to be in the position of transforming the lives of students through the education they receive. Today, as president of St. John’s University, that privilege is magnified 20,000 fold as I reflect on the responsibility of leading this great University.

“That is the task I would like to take up today, to lay out a mission and establish priorities in order to insure that St. John’s University will continue to fulfill its mission of providing education that will transform the lives of students, especially those whom otherwise would not have such opportunity,” Gempesaw said.

Speakers Shawna-Lei Santos, CPS ’16, alumnus William Collins, member of the Board of Trustees, and psychology professor Elizabeth Brondolo, each spoke about Gempesaw’s impact and his commitment to his responsibilities and helping the University move forward.

Peter D’Angelo, ’78 MBA and Chair of the Board of Trustees, began the Investiture Ceremony. The Presidential Regalia, consisting of a red robe and a doctoral cap (depending on the President’s degree-granting institution) were placed on Gempesaw, along with the Presidential medallion, which bears the crest of the University on its face.
Gempesaw was then given the University Mace, a 39 inch long scepter that bears symbols of the University and signifies the power of higher learning, according to a University press release.

Gempesaw spoke before the University community as well as various religious and academic leaders. Archbishop Bernadito Auza, papal representative to the U.N., the Rev. Gregorio L. Bañaga, Jr., president of Adamson University and the Rev. Michael Carroll, a provincial superior of the Eastern Province of the Congregation of the Mission were all in attendance and shared their words of encouragement to Gempesaw in several short speeches.

The ceremony was preceded by a mass celebrated by Bishop of Brooklyn Nicholas DiMarzio, and followed by a reception in Taffner Field House.

Now that Gempesaw is officially president, he can move forward with his plans to strengthen the University.

“The great university is never content with the way things are,” Gempesaw said. “It seeks to be better.”