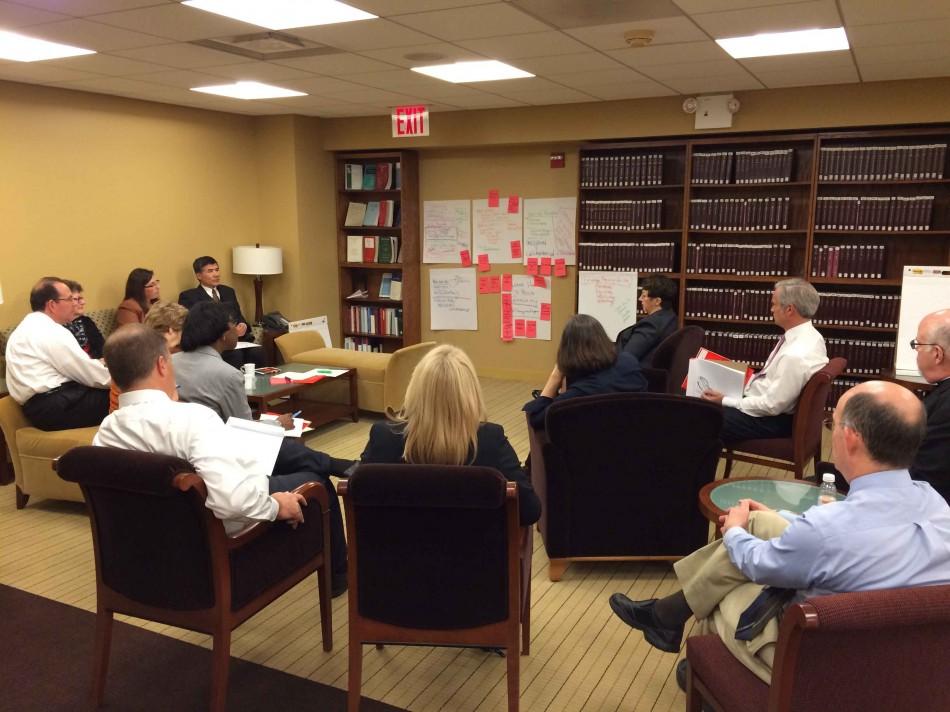 In order to gather input from the campus community, the president’s recently-formed working group will hold four open listening sessions next week.

The sessions, which anyone can attend, will be held on Nov. 20 at 1:50 and 5 p.m. on the Queens campus, on Nov. 21 at 9 a.m. on the Staten Island campus and at 12:15 p.m. on the Manhattan campus. More details will be announced later this week, according to Strategic Priorities Working Group co-chair and law school dean Michael Simons.

At his investiture, University President Dr. Conrado “Bobby” Gempesaw announced that he had identified four priorities for the University.

In order to make progress on these priorities, Dr. Gempesaw formed the strategic working group, which is comprised of 14 members, who represent the various groups at St. John’s, including a student and an alumnus.

The working group, which met for the first time on Oct. 23 and held a planning session on Nov. 5, will meet frequently throughout the rest of the academic year to identify up to five action items for each of the priorities.

“In essence, our goal is to come up with, really, the to-do list of the University’s priorities for next year,” Simons said. “By the end of this year we’ll have a list of 15 to 20 action items with an indication for each one, and with each one also the measures of how we’re going to evaluate success, and probably a timeline for implementation.”

The list of action items will be presented to the president and discussed at the spring Board of Trustees meeting and at the second annual president’s retreat in May.  According to Student Government President Rob Koehler, the student body representative on the committee, students could expect to see priorities put into action as soon as fall 2015.

While the specific action items have not been determined yet, Simons and Florio said that there will most likely be a wide variety of “deliverables” on the list.

“Some of them might be the kinds of things that might be implemented within a year, others are probably more long-range things that will take multiple years to bring to fruition,” he said.

“It’s not traditional strategic planning at all. Usually strategic planning is maybe a two-year process that comes up with a five-year plan, like we’ve dealt with in the past at St. John’s,” Florio said. “So I think that this is very different and it’s maybe a way to get to something more quickly.”

In addition to taking an accelerated approach, the working group represents a broad sector of St. John’s.

“It’s not a top-heavy group; there aren’t any senior vice presidents. There’s an assistant professor who doesn’t have tenure, there’s a student, there’s administrators at the middle level,” Simons said. “That’s reflective of Dr. Gempesaw’s real desire to have a bottom-up planning process that’s broad-based and inclusive and is designed to get input from the entire University community.”

Along with the listening sessions, which will be facilitated by professional leadership consultant Sharon McDade, the working group plans to add a suggestion form to the St. John’s website and collect input from SGI and other university structures.