Veterans Day at St. John’s celebrates those who served in armed forces

Students, faculty and families gather to remember and pay tribute to the military 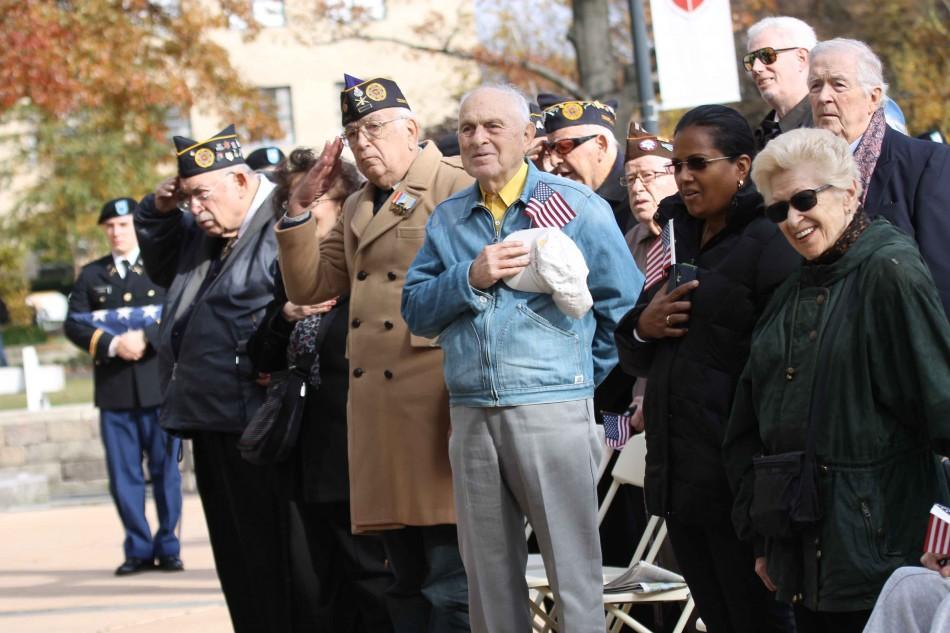 Veterans, families and students all gathered together for the St. John’s annual Veterans Day ceremony hosted in front of St. Augustine Hall yesterday at noon. The commemoration paid tribute to all veterans who served the country during moments of warfare, including past and present times.

“Veterans Day is more than a celebration,” said Dr. Gempesaw, who spoke during the ceremony. “It is a time when we, as a nation and as one, reflect, respect and give thanks to those who have served in the United States Armed Forces.”

Gempesaw, whose grandfather and nephew previously served in the Armed Forces, spoke on the sacrifices of families whose loved ones are sent overseas for combat.

“[The families] do, in a sense, share their loved ones with all of us in service to our country,” he said.

Professor of Military Science Lieutenant Colonel Marci Miller also delivered a speech on the meaning behind the service veterans and current militants have done, describing the individuals as “ordinary people performing extraordinary acts of bravery and selfless devotion.”

As rows of military cadets stood at the front of the ceremony, Miller noted the amount of bravery they embodied in order to serve their country.

“The cadets who stand in front of you today did not avoid the most basic and cherished responsibility of the citizen: to defend its nation and people,” she said.

Towards the end of the service, St. John’s alumnus Andrew Lyons received an honoree award for the 28 years he served in the United States Army. Lyons is currently the director of advising support at St. John’s University Freshman Center. During his thank you address, he mentioned the unforgettable friendships and connections that he will always carry with those who have served and continue serving.

“It’s a bond, it’s a connection that no one else knows,” he said. “That’s something that we share amongst ourselves.”

Rather than spending Veterans Day without classes, St. John’s annually hosts this event to encourage reflection among students and the community.

Professor Mark Prendergast, who was the awarded honoree for last year’s commemoration, believes that holidays are now used as excuses for sales and days off, instead of for thought.

“I do think we should have moments on a day like today, where we do stop and reflect,” he said.

Alessandra Laucella, a junior studying at St. John’s, thinks that Veterans Day should be spent honoring those that fought, and continue in combat today.

“Like it’s said, freedom isn’t free. People are willing to go out to fight, and it’s really such a mature decision for them to make,” she said. “I think it’s a brave thing to do.”