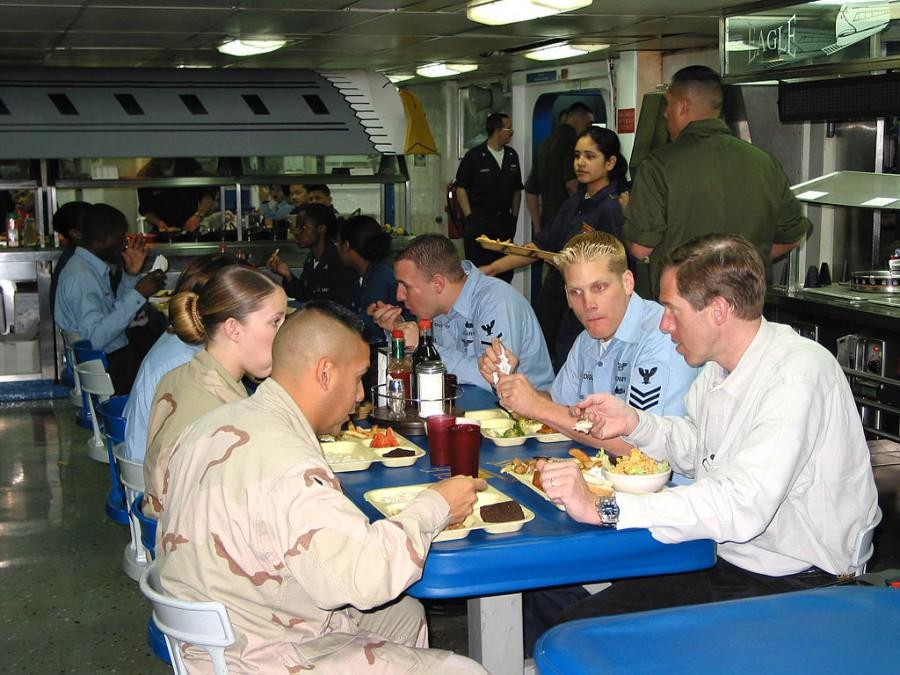 Brian Williams, right foreground, dines with sailors and marines while aboard the USS Tarawa in the Arabian Gulf in 2003. Photo: Wikimedia Commons

NBC News issued a statement, which said, “Brian has a responsibility to be truthful and to uphold the high standards of the news division at all times… we believe this suspension is appropriate.”

Lester Holt, anchor of NBC’s “Dateline,” will continue to substitute for Williams, according to Time Magazine.

Previously, Williams apologized on Feb. 4 for incorrect statements he made claiming that his helicopter was shot down in Iraq in 2003, according to the Associated Press.

Williams acknowledged that the helicopter he was in was traveling behind the helicopter that was actually hit, saying that he had made a “mistake,” according to a New York Times article published Feb. 4.

The same New York Times article reported that the apology followed Williams’ story on Nightly News about Tim Terpak, an Army officer who allegedly helped save Williams from the helicopter. The show covered the two attending a New York Rangers hockey game together.

While introducing the pair, the game’s announcer said, “U.S. Army Command Sergeant Major Tim Terpak was responsible for the safety of Brian Williams and his NBC News team after their Chinook helicopter was hit and crippled by enemy fire [in Iraq, 2003].”

The military newspaper “Stars and Stripes” quickly published a report of eyewitness accounts saying that Williams was not in a helicopter hit by R.P.G.s while he was reporting in Iraq, according to a Feb. 9 Fox News article.

In a Facebook response to the story, Williams wrote, “You are absolutely right and I was wrong,” according to the aforementioned New York Times article.

On Wednesday, Feb. 4, Williams also apologized during his Nightly News Broadcast, according to the Associated Press.

“This was a bungled attempt to thank one special veteran and…our brave military men and women veterans everywhere,” said Williams. “I hope they know they have my greatest respect and also now my apology.”

According to a USA Today article published Feb. 9, Williams voluntarily stepped down temporarily while NBC News conducts an internal investigation. NBC plans on fact-checking any of his possibly exaggerated accounts.

After the uncovering of Williams’ “mistake,” many media outlets are calling his credibility and past stories into question.

On Monday, Feb. 9, the Washington Post reported on discrepancies in Williams’ accounts of Hurricane Katrina, in which he claimed to have narrowly avoided gangs, became extremely sick and saw a dead body floating in the French Quarter.

As a result of the scandal, Williams decided to cancel his upcoming appearance on “The Late Show with David Letterman.” The show was set for Thursday night, according to the USA Today article on Feb. 9.