Students will be able to retake failed courses starting Fall 2015 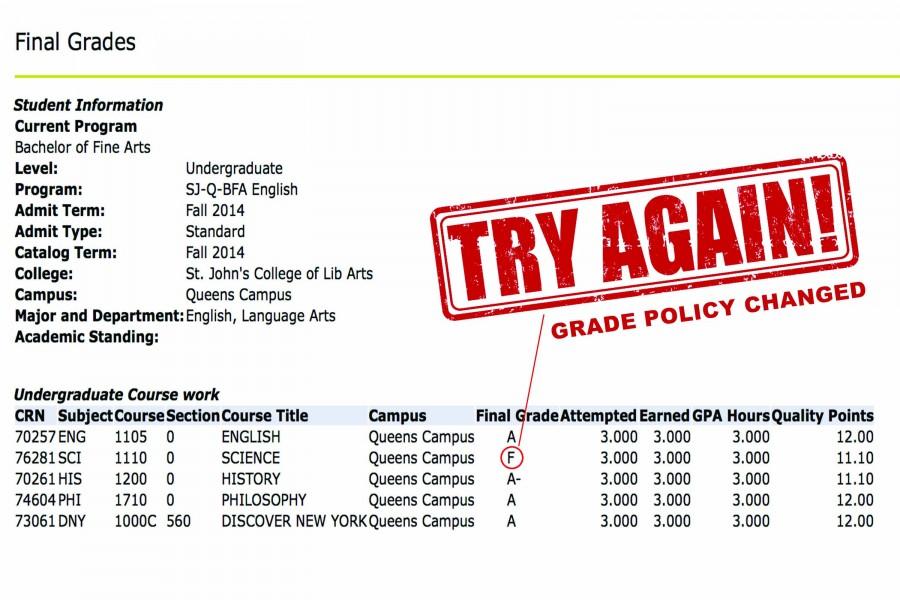 How would you feel if you could fail a class and not have it affect your GPA? That will soon be a reality here for some students.

The University is adopting a new grading policy that will allow students to retake courses they have failed and hopefully end up with a more positive outcome.

University Provost Robert Mangione said in an interview with the Torch that the new grade replacement policy will begin with the initial enrollment for a class during the Fall 2015 semester. The policy will be implemented across all of the colleges within the University.

The policy will only affect those courses taken during or after the fall 2015 semester.

Mangione stated that a student cannot retake a spring 2015 class during the summer 2015 session with the hopes of having the failing grade dropped.

“We want to help our students to compete effectively with students from other schools applying for graduate school and things like that. No one can prevent someone from manually going through the GPA and putting that F back in if you apply to grad school at another institution. But when the transcript is received and they look at the GPA, it would enable our students to compete with the rules and regulations [at] many other schools,” Mangione said.

The new policy states that a student can retake a course they have failed and then have the new, higher grade factored into their GPA.

The failing grade will no longer be factored into the GPA, but will remain on the student’s transcript.

The F will remain on a student’s transcript to determine their eligibility for future academic honors, according to Mangione.

“It should all be a positive outcome for the student,” Mangione said.

There are several conditions that must be followed in order for a student to be able to have the failing grade dropped.

Professor Caroline Fuchs, an associate professor and librarian, was the head of a University Senate committee that explored the idea of a new grading policy.

Fuchs is also chair of the Educational Programs and Development Committee (EPDC) within the senate, which includes both faculty members and students.

Fuchs’s committee looked into the development of a new grading policy at the request of Provost Mangione.

The idea for a new policy originally came from Dean Jeffrey Fagen of St. John’s College of Liberal Arts and Sciences, according to Fuchs.

Fuchs’s committee prepared a report that outlined the new grading policy, and presented the report to the senate, which approved it with a vote of 33-0-5.  The policy then went before the Board of Trustees, who approved it, then before the full board, who also approved it, according to Mangione.

The report states, “A currently matriculated student may repeat undergraduate courses previously taken at St. John’s in which a grade of F was received. While both the failing grade and the repeat grade will appear on the student’s transcript, only the higher grade will be used to compute the cumulative GPA.”

The current policy requires the failing grade to be factored into the GPA even if a student retakes a course. Both the new grade and the previous failing grade are combined.

The report states that a repeated course must be taken in the same grading mode as the original course (i.e. letter grade; pass/fail). A conventional course with a failing grade cannot be repeated as an independent study course.

The repeated course must also be taken within four academic years of the course failure. Any repeated courses will not be covered by financial aid packages during summer sessions.

The new policy will not allow students who have previously been dismissed from a particular program or major to be reinstated, according to the report.

The only exception to the new policy will be any failing grades received as a result of University disciplinary action due to academic dishonesty or any other infringement upon the University’s Academic Honor Pledge.

The committee’s research and report continued on the work done by a previous committee that had done a survey of grading policies at other schools, according to Fuchs.

Fuchs’s committee then met several times to discuss the details of the policy, including figuring out what grades to include or exclude.

The committee is conducting ongoing research, including how financial aid packages from St. John’s are submitted to New York State, as well as whether other grades above an F will be able to be replaced.

“At this point, [the policy] is only about failing grades. We still have to look into financial aid and how it will affect students that way,” Fuchs said.

“We are concerned with equity. We don’t want students who can keep paying to retake classes to have an advantage over those who can’t,” Fuchs said.

The committee will be presenting an update at the next Senate meeting.