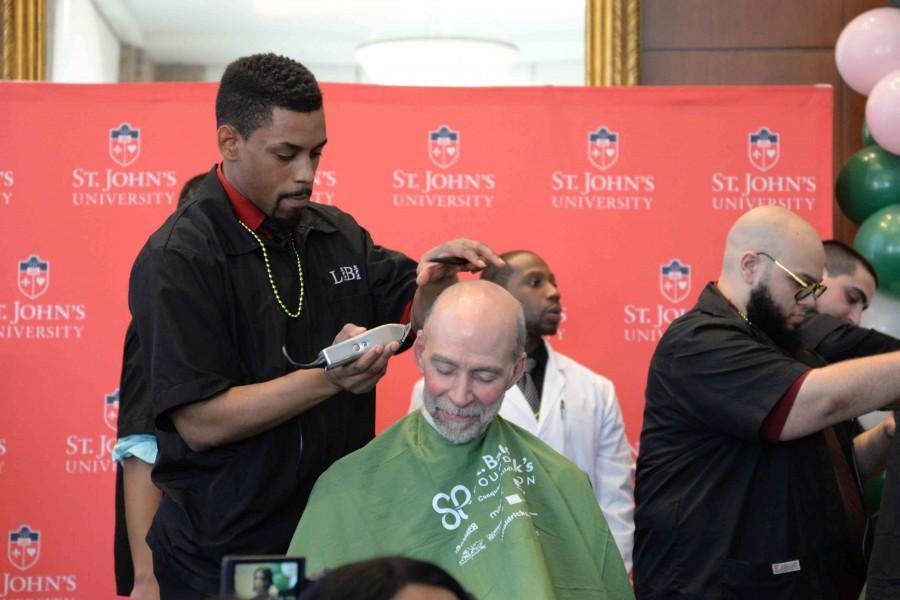 St. John’s University students showed their solidarity for children with cancer on March 15 during the St. Baldrick’s and Children With Hair Loss (CWHL) event. Students, families and other participants got their hair either shaved or cut to raise money for cancer research.

The gathering took place in the D’Angelo Center, where one was sure to see participants lined up in chairs, having their hair removed in some way by the DiRosa Hair Care hair salon or the barbers of the Long Island Barber School.

Altogether, there were 60 head shaves, six of which were women and 29 haircuts, all of which raised $25,000 and counting toward cancer research, according to Angela Seegel, the event coordinator.

This year’s event was held in honor of Jason Lamberti, 11, of Staten Island and Nicolas Colucci, 5, of Long Island. Jason was diagnosed in Dec. 2004 with Neuroblastoma, a common cancer in children that affects the nerves. After two years of treatment, his status is cancer free, but he still suffers from loss of hearing as a side effect.

Nicolas was diagnosed with Hepatoblastoma, a form of liver cancer, on May 19, 2014. He was declared cancer free this past September. “We weren’t lucky for him to have it, but he didn’t have it for too long,” said his father, Phil Colucci.

Nicolas arrived with his brother, Brody, 3, and his best friend, who both had their heads shaved as well.

However, this was not the Colucci family’s first experience with the St. Baldrick’s Foundation. According to Tara, a hairdresser, her sons had been getting their heads shaved even before Nicolas’ diagnosis.

Tara said, “[Nicolas] would go up to people in the supermarket and tell them, ‘I made money for sick kids!’”

“His hair actually started growing back in December and he shaved his head again,” said Phil.

During the St. Baldrick’s event, many shaved their heads in honor of Nicolas and Jason. One notable person was Shannon Long, 19, of Endicott College.

“I feel great…I feel so good and happy and blessed,” Long said after barbers shaved her head. “I can’t stop touching my head!”

Phil appreciated the shaved heads as a show of solidarity. “It takes so much of your identity away,” he said of those who had lost their hair during chemotherapy.

The St. John’s University baseball team was an important presence to the honored boys. “I think he was pretty excited over the baseball team,” said Tara of her son, Nicolas.

Dr. Mangione stressed the importance of coming in support of not only the cause, but in support of the brave student participants as well.

“What inspires me is the students…I saw a student get her hair shaved, so I thought that it was the least I could do,” said Mangione.

Throughout the event, there were also raffles, giveaways, bake sales and a grab-a-lunch for $5. Each head shaved raised money for the St. Baldrick’s Foundation, while every haircut raised money for CWHL.

The St. John’s community succeeded in both raising money and showing support for children with cancer, who are often sources of inspiration and bravery.

Tara said, “They’re bald, they’re sick, they’re hooked up to poison…but they never let it get to them.”