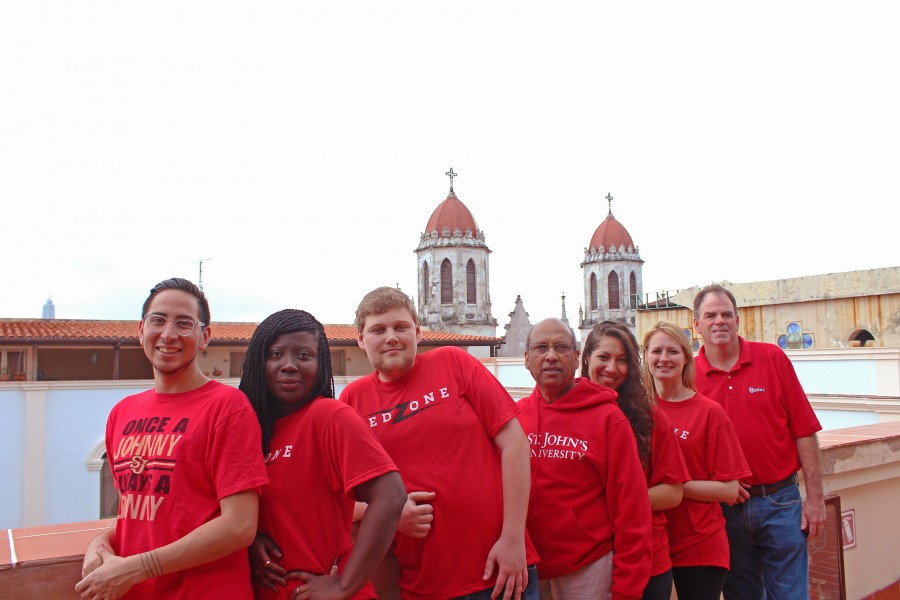 Over spring break, a group of students in the International Communication graduate program traveled to Havana, Cuba. The trip was headed by Dr. Basilio Monteiro.

While there, the five students from Monteiro’s International Public Diplomacy course experienced Cuba’s culture and way of life. Students Oscar Diaz and Bree Driscoll filmed a documentary about the Cuban way of life, also documenting Cuban citizens’ hopes as to what will happen in the future as far as American-Cuban relations go.

Monteiro had the idea that the group should film a documentary based on their time there. Graduate student Miranda Baldwin said, “The documentary was the brilliant idea of [Dr. Basilio] Monteiro and it came to fruition because of [Bree] Driscoll and [Oscar] Diaz.”

Diaz said that, more specifically, they were trying to focus on telling a story about the Cuban people.

“We knew that, for the most part, Cuba was in the shadows and we wanted to shed a bit of light on the people, their stories of resilience and their high hopes for the future,” Diaz said.

Throughout the trip, Diaz and Driscoll carried their filming equipment everywhere they went. Driscoll filmed, while Diaz assisted with the mic, tripod and Spanish translation.

“We were only in Cuba for a week so we really made an effort to fit as much as possible into our days. We took on long periods of interviewing, curious to learn about people’s experiences and lives,” Diaz said.  “Filming and lugging around equipment through the streets of Havana definitely made us stand out.”

Driscoll and Diaz interviewed students and faculty members of the institutes they visited. They also interviewed fellow graduate students on the trip about their experiences and thoughts. These interviews can be seen in the documentary they made, which is on YouTube and featured on the St. John’s website.

The trip was inspired by the easing of Cuban-American relations hinted at by the phone call between President Barack Obama and Cuban president Raul Castro that took place back in December. Since then, Americans have traveled to Cuba despite the travel ban that is still in place.

According to Diaz, at first, the idea of going to Cuba seemed impossible. As the semester progressed, Monteiro reintroduced the idea again.

“We started to think it could actually happen, so we all individually tried to find the resources and time off from work to go,” Diaz said. “The plan was to go over spring break at the end of February, so we had less than two weeks to process visas, coordinate our airfare and housing and get University approval. Before we knew it, we were landing in Havana.”

Baldwin said they researched other schools’ trips to Cuba to find out where they had stayed and what they had done. They found that students from Stony Brook University had gone, but it had taken a year to organize the trip.

“Dr. Monteiro did it in two weeks. Talk about a man with connections. All in all, the trip was an outlandish idea of his on day one of the semester and fortunately for us, everything fell into place. Tensions continued to ease between Cuba and the U.S. and the rest is history,” Baldwin said. “From what we saw, this is the start of a brand new chapter for both Cuba and the States.”

According to Monteiro, the trip was paid by students and faculty, with assistance from the dean’s office. The group also got help from a travel agent in Washington, D.C.

“Dr. Monteiro got funding from some outside sources and we individually covered the remaining costs, which was very little. Each student paid less than $300,” Baldwin said.

Diaz, Baldwin and graduate student Afua Twumasi-Ankrah all agreed that the trip was an eye-opening and invaluable experience. They all believe that students should have the opportunity to learn through travel.

“Go with no prejudices. Go with an open heart and head [mind]. Go as a student,” Twumasi-Ankrah said.