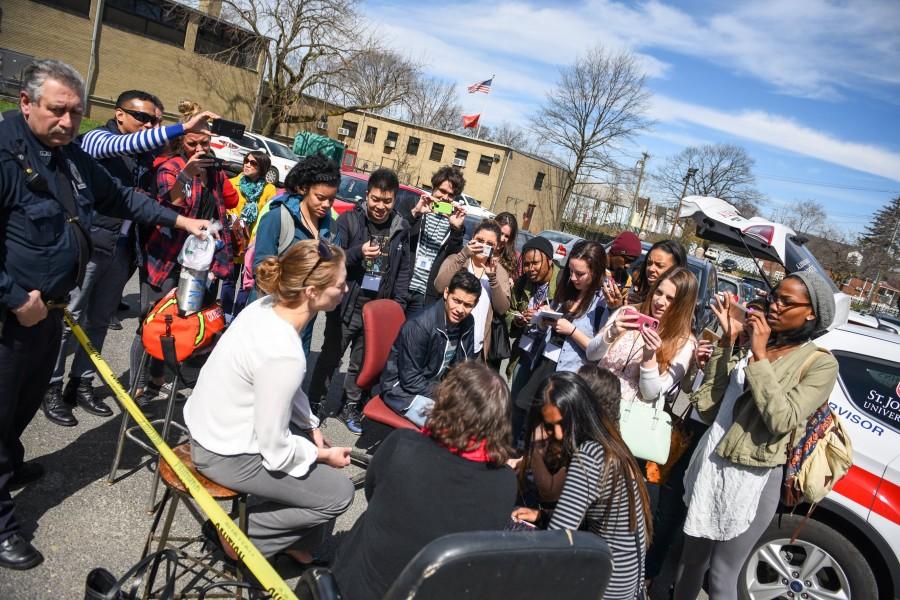 According to career and internship Advisor William Murphy, who oversaw the planning for this event, the Emergency Situation Career Associated Practical Experience (ESCAPE), was presented to 75 undergraduate students. ESCAPE equipped students with a career-focused, experiential learning opportunity in their areas of study.

“ESCAPE is an innovative program bringing together faculty, administration,and public safety in collaboration to engage students in professional and skill development from inside to outside of the classroom,” Denise Hopkins, executive director of University Career Services said.

“By providing an opportunity for hands-on experience related to each student’s major, ESCAPE builds upon lectures and theory to facilitate further learning and career exploration with real world perspective.”

When presented with a made-up scenario of the campus the students faced with a mock chemical accident at St. Albert Hall, with victims facing injuries, potential homicide, one confirmed fatality and later on an arrest was made.

“When we got there, it was one slide of a lecture about covering breaking news then all of the sudden, fake crises started happening and we all just kind of went with it.”  Dallas Vargas, senior journalism major, said.

The journalism students pulled together groups that worked as media and updated the story throughout the day. Toxicology, homeland security and public relations  students worked together through an exercise that was provided by the school called the University Emergency Plan as well as present press briefs and a press conference.

“This was an extraordinary effort and cooperative venture by so many resources at the University. I know it gave our journalism students the kind of experiential learning that will help them with their journalism skills and provided a great experience they can build on when they pursue professional opportunities,” Michael Rizzo, director of the journalism program and assistant professor for the College of Professional Studies, said.

Students who attended the event had no idea what was happening when the mock campus emergency began, but the event urged students to question their field of study and yearn to know more about the situation in which they were put in.

“It was weird, I’m always on the receiving end of news in breaking news situations, but I’ve never been in this kind of situation before,” said Vargas. “It was pretty eye opening to see how quickly things escalate in those situations and how difficult it is to gather accurate information.”