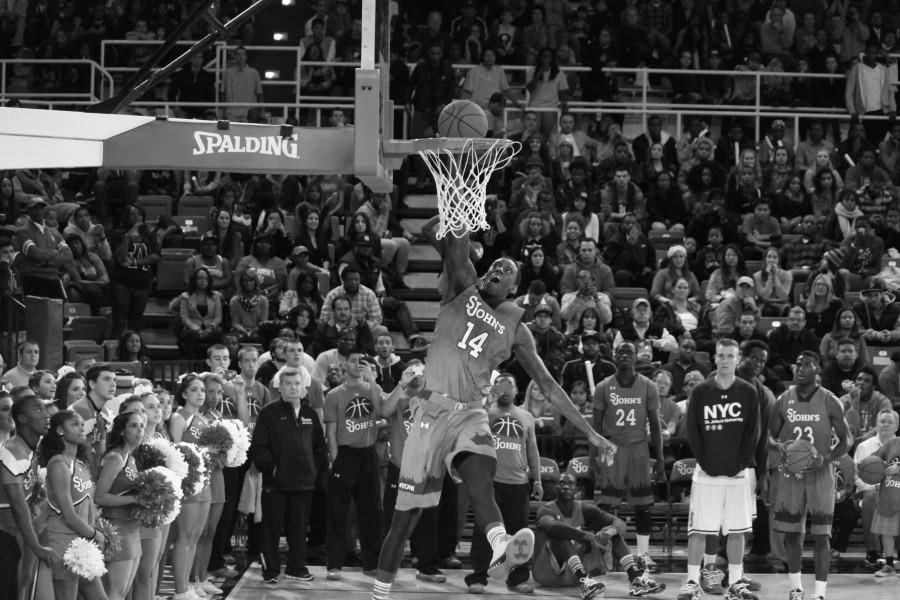 Each year, the basketball season starts with the Red Storm Tip-Off, an event that brings the student body together while showcasing the year’s men’s and women’s basketball team. The Tip-Off will be held in Carnesecca Arena on Oct. 16. The time will be announced closer to the date.

At Tip-Off, members of the basketball team are announced to the student body in an epic way: the players run through a banner onto the gym floor. After the players’ introduction, the coaches say a few words about what they are expecting this season.

“The school spirit is great,” senior Shane Fallon said. “It’s like the first major event for the basketball season and it gets everyone to come out for not only the performer but also to see the basketball team for the first time.”

In the past years, there was a scrimmage and some giveaways. This year’s Tip-Off will be $5; tickets will be on sale soon.

“Chris Mullin being here is like a new big thing,” Fallon said. “It would be cool if he came out and gave like a motivational speech.” His words would make Tip-Off an even more cheerful experience than it already is.

Many people see Tip-Off as a time to connect with their peers. While there, it’s possible for you to talk to someone that you’ve never met before. Senior Lexi Brown says she enjoys the Tip-Off for the diversity.

“I always like seeing the St. John’s community because there’s so many different people coming together and it’s really cool because it’s always something that everyone enjoys,” Brown said. “The amount of support that the student body has for each other is always a really nice thing to see.”

One of the most exciting parts of Tip-Off is the performance by a guest musician. Last year’s performer, French Montana, made it a lively experience for the St. John’s community. Many students see the performance as almost a concert.

“Because I don’t go to concerts, being able to experience one at school is pretty cool,” Junior Jaleon Davis said.

Tip-Off shows that students can come together in a dynamic way. The energy brought to Carnesecca Arena is an amazing thing.

“To see everyone come out wearing red is a good indicator of what the season will be like,” Fallon said.