On Alert: Amidst shootings, community is urged to remain attentive 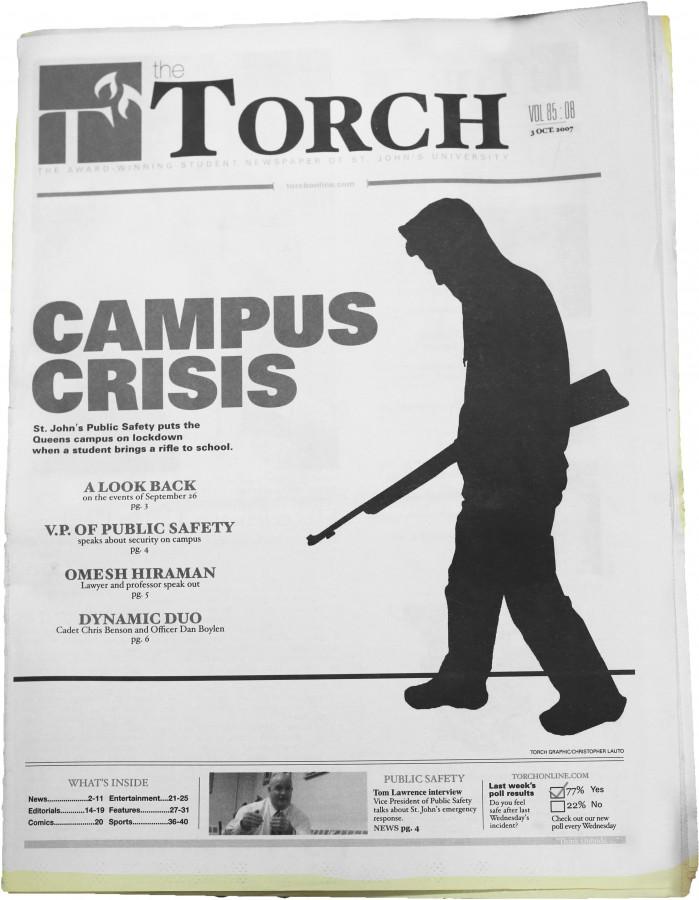 The number of shootings on college campuses nationwide continues to rise at alarming rates, and St. John’s says it is taking the necessary steps to prevent this from occurring here.

“Speed is key. 90 percent of the university opted into the instant messaging system and this the best way of communication,” said Thomas Lawrence, vice president of Public Safety.

According to an Oct. 9 TIME article, “These are all the College Campus Shootings in 2015,” there have been 23 campus shootings since the beginning of the calendar year—with two months still to go.

Across the nation, college campuses are taking precautions when it comes to the safety of students and faculty.

In an interview with the Torch, four high-ranking members of Public Safety discussed their procedure if an active shooter appeared on campus.

In the event that Public Safety sees something suspicious or receives a phone call reporting suspicious behavior,  they said they investigate the situation and also contact local law enforcement.

“Because we are not armed, we notify the NYPD just in case assistance is needed,” said Denise Vencak, executive director of Public Safety.

If Public Safety determines there is an emergency,  the entire campus would be put on lockdown, meaning that they close the gates.

The next step is to notify the university community via text message and phone call informing everyone of the emergency on campus.

“Communication is critical,” said Patrick Wing, a Public Safety lieutenant. “We have PA (Public Address) systems, communication boards and we want the message to get out as fast as possible when an incident occurs.”

Public Safety remains in contact with law enforcement throughout the process.

The issue of safety on college campuses has garnered more public attention because of recent incidents.  At the beginning of this month, there was a shooting at a community college in Oregon that left 10 dead and nine wounded.

While St. John’s posts its emergency plan on the Public Safety page of its website, some students said they are not aware of the procedures in place.

“College campuses are pretty open, and I do not know the full procedure, but I do know that they lock down the buildings. But, other than that, I don’t see a real plan,” junior Anike Thomas said.

St. John’s knows first-hand how quickly these situations can develop.

In 2007, there was an incident on campus, during which a student was seen walking around with a rubber mask on his face, and carrying a peculiar object that was covered. The object turned out to be a rifle. Fortunately, another student reported it to Public Safety before the situation escalated.

“Within eight minutes of receiving this call, the person was apprehended,” Lawrence said. “Thankfully, no one was hurt. “

Public Safety has been working to take extra precautions when it comes to the safety of everyone on campus since the 2007 incident.

“We have training at orientation, video postings on MySJU and require all the faculty and staff to take part in an active shooter awareness course in event of an emergency,” said Ralph Pasculo, training coordinator for emergency management.

The department also is trying to implement and practice procedures in case something like this happens on campus again. Since the buzz about campus shootings has frequently been in the media, St. John’s has reminded students of what do in case a similar incident occurs. On UIS and on all University social media, there is a video on how you can prepare and what to do in this situation.

This Department of Homeland Security Active Shooter Situation video, which was posted by public safety, gives a realistic representation of potential occurrences during a shooting incident. It has general tips for survival about having a plan and remaining safe.

There are inherent limitations to preventing such a situation, however, as campus gates are open during daytime hours. This is why Public Safety constantly encourages the community to report any suspicious behavior.

“The first thing I would do is call 911 before I notify Public Safety,” sophomore Destini Rhymes said. “I feel safe to a certain extent, but I feel as though Public Safety could do better with the gates supervision.”

Sophomore Sharizma Budden added, “I feel as though anybody could walk on campus with anything because Public Safety does not check if they come before 11 p.m. I know there was a student a few years ago who had a gun on campus and thankfully someone notified public safety in a timely manner.”