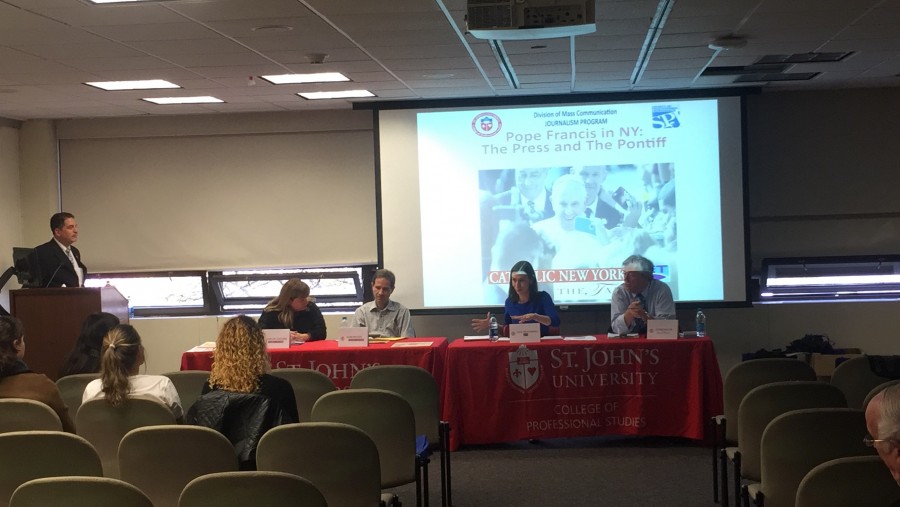 Panelists from Catholic news organizations spoke to students about their experience covering Pope Francis's visit to the United States.

On Oct. 29, the Division of Mass Communications hosted “Pope Francis in N.Y.: The Press and The Pontiff,” an event that brought in a panel of journalist to discuss how they covered Pope Francis’ trip to the United States.

Many students were excited for the pope’s visit, as they got a chance to see him in person rather than on TV. The Director of the Journalism Program, Michael Rizzo, said the reason he brought in the panel was because of the student’s response to the visit.

“I was seeing how a lot of students were talking about the pope’s visit,” Rizzo said. “They knew about it, they were watching it, they were following it.”

The Division of Mass Communications thought it would be a good idea to bring students a perspective difference from that of local and national news channels.

“What I wanted to do was see how could I bring some of the industry professionals that I know, and have them tell the students about these publications as well as what they did, and that was probably a little different than what students read or watched on Channel 2, Channel 4, the New York Times, the New York Post, that type of thing,” Rizzo said.

“They were the two Catholic news organizations that were the most involved when the pope came here to New York to visit,” Rizzo said. “I wanted to have them give their perspective on what it was like to cover the pope.”

At the event, the panel answered questions regarding what it was like covering such a national story. With so much going on at one time, it can be difficult keeping up with the news.

“The hardest part was staying aware,” Katie Breidenbach said. “Just giving yourself every single second to be aware, be available and in touch with the environment around you.”

Students that attended the event, like seniors Megan Murphy and Mikaela Moraeu, said they gained new information about the journalism field and experience.

“As a journalism major, I definitely enjoyed learning about the different aspects about the journalism world, especially such a crazy event like this one,” Moraeu said.

“Personally I liked listening to the journalists and how they spoke about their personal experiences when they took off the journalism hat and looked at the pope and all the events as just themselves,” Murphy said.

Woods said he enjoyed being able to speak at his alma mater.

“It was great to be here,” Woods said. “It certainly brought back a lot of memories of late nights and learning the craft of journalism.”