$2.1 million were raised for student scholarships 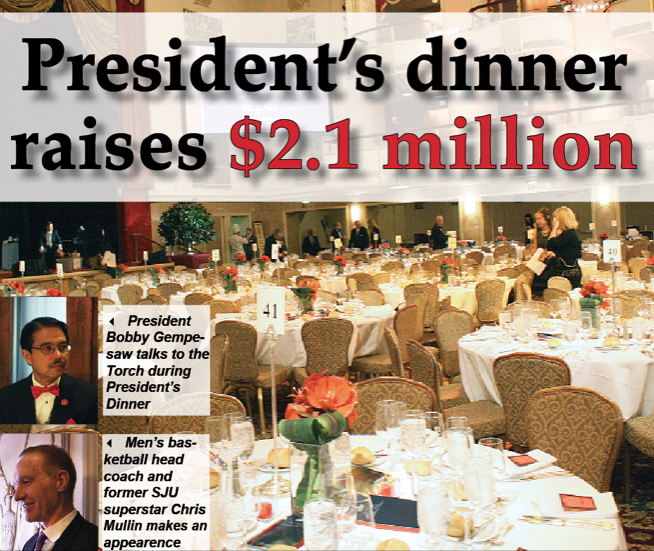 Hosted by President Conrado “Bobby” Gempesaw, the event celebrated the service aspect of St. John’s. The University said the dinner raised $2.1 million, all of which will go towards scholarships for St. John’s students.

“This is one of those events from St. John’s that differentiates St. John’s from other institutions of higher education where our alumni come together to celebrate what’s important for our University, which would be to support our students,” Gempesaw said.

The evening also presented the Spirit of Service Award to those individuals that incorporate the Vincentian mission of St. John’s through their actions. The honorees of the night were St. John’s alumni William L. Collins, Lesley H. Collins, Anissa Mitrano Shannon and James J. Shannon.

Nobel Prize award nominee and the founder of the Akamasoa Association, Argentinian Reverend Pedro Pablo Opeka, was also a recipient of the Spirit of Service award.

Gempesaw hosted the event for the second time, and is honored to be part of this tradition. Gempesaw also said that some of the honorees came from humble beginnings themselves.

“With a St. John’s education they were able to be successful in their professional and personal lives,” Gempesaw said. “They have a very strong feeling of giving back.”

As the University’s president, Gempesaw shares the aspirations of the St. John’s students, and he is excited to see where the money is going to go.

“It’s not just about one night,” he said. “It’s really about the impact on many of our fellow students.”

William Collins ‘76C and wife Lesley Collins ‘83SVC said they couldn’t think of a better way to show their gratitude with St. John’s. The couple remains involved with the University.

“Both of my parents were immigrants,” he said. “We grew up in Astoria and I got a half-academic scholarship to St. John’s and that’s the only way I could’ve gone. Without it, I would’ve gone to one of the city schools,” Collins said.

“It’s an opportunity to give back and to allow others to have the same chances we did,” he said. Collins also said that it’s amazing to see how diversified the university became compared to his time as a student and how it keeps changing.

Lesley advices the students to “work hard, make the most of it and then give back” when they become successful.

James Shannon ’87CBA and Anissa Shannon ‘89SVC, ‘91ED were also honorees for the night. The couple met at St. John’s. Both have attended the event on years past, but this is the first time they went as honorees.

James also said how past St. John’s members were local, and now they’re national and even international.

Anissa said she felt like she was back at school. “I’m so happy to be part of this, give back and continue the tradition with my children,” she said. “I don’t know if they’ll go to St. John’s, but hopefully they can carry on a little bit of the giving because it goes a long way.”

She would tell those students that are being awarded these scholarships to embrace themselves and be a part of it. Her husband said, “The best college experience is not only for four years, but for your lifetime.”

The couple is very involved with the University community, as James is a member of the Board of Trustees. They attend sporting events, trips, etc.

Rev. Opeka is not a St. John’s alum, but embodies the University mission. He is the founder of Akamasoa, a non-profit organization in Madagascar. Many recognize his Vincentian work, and although he does not speak English, he was able to express himself and speak about his country with the help of one of the students in the President’s Society, Gabriel Camara.

The reverend was surprised with the invitation to receive the award, especially coming from such a poor, faraway place like Madagascar. To be able to travel to New York City and in one of the most prestigious hotels is inexplicable, and he is very thankful that St. John’s recognizes and thinks of the poor. He has been working with those in need for 42 years.

Rev. Opeka said that it’s important for us in a first world country and a big city to think about those in need. In Madagascar he was once asked where he was from, and he answered he was from the planet Earth. We are all from the same place and according to him, we should all learn to live in a way that’s fraternal and Vincentian.

He said that St. John’s students are blessed to study in a place with such spiritual and humanitarian values. Rev. Opeka also said how hopeful he is in the youth, and that he stores a great amount of faith in them.

St. John’s alum and current head coach of the St. John’s basketball team, Chris Mullin, attended the dinner for his first time. Besides being surrounded with a nice group of people and seeing a lot of old friends throughout the evening, Mullin appreciates seeing how the foundation of the Vincentian education sticks with  and influences many people.

Mullin said that he was brought up in an Irish, Catholic family and had a Catholic education all his life until college. Experiencing the giving back aspect of his religion his whole life, Mullin believes that as you get older, it becomes even more important.

“Sometimes when you’re younger you’re a little more carefree, and it kind of just goes by,” Mullin said. “But when you get older, things go on and there’s no explanation for it. That’s when your faith and belief comes in.”

For Mullin, education is a substantial aspect of life, and for those of the current college students’ generation, he left a message.

“Education is really the key to opening up doors for yourself, you know,” he said.

“It’s all about taking care of each other and passing on wisdom and network that you have to the people coming up behind you,” Mullin said. “Any time you can share your experiences and make it easier for somebody is kind of your obligation.”