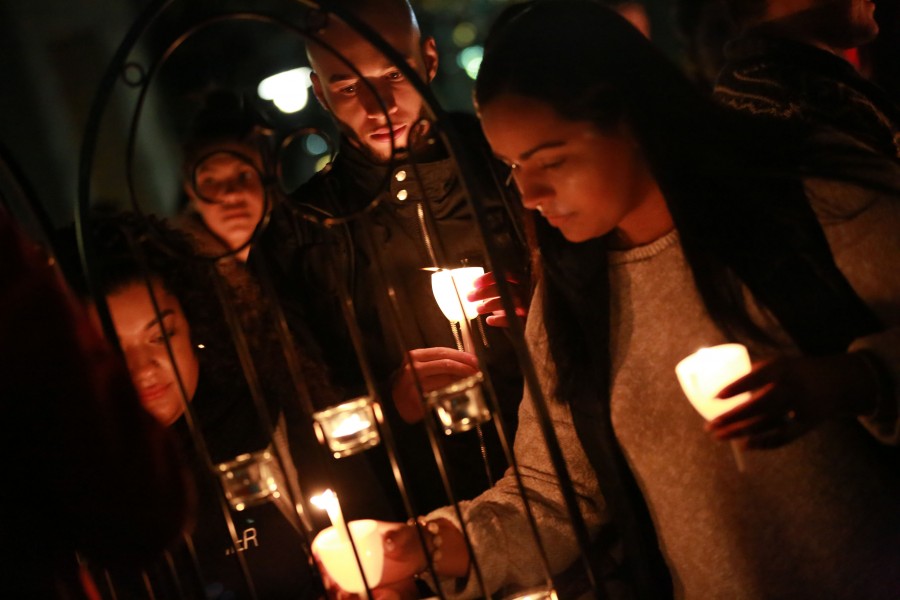 Over 40 students gathered on the Great Lawn on Nov. 16 in remembrance of the victims who lost their lives and those who were affected by the recent tragedies.

Dozens of students gripped their candles as darkness casted over their shoulders. By the Great Lawn, they were encouraged to hold the flames in memory of those affected by tragedies worldwide from the past week, and to regularly express their feelings to loved ones.

“Always say ‘I love you’ to people, because you never know if that may be your last time,” junior Richard Cantoral said to the crowd.

The vigil, hosted by the Latin American Student Organization (L.A.S.O) in the evening of Nov. 16 outside St. Thomas More Church, was designed to promote peace in light of the attacks in Paris, Beirut and Baghdad, and other natural disasters.

The event was called ‘Luces Para La Paz’ which means ‘Light for Peace.’

“It reminds me to be thankful, and to be unified,” sophomore Kimberly Alvarez said after attending the candlelight. “To take advantage of what we have now.”

L.A.S.O was spurred to hold this event after a string of tragedies. Most recently, 40 civilians in Beirut were killed on Nov. 12 after a pair of suicide bombings. A day later, 129 people were killed and hundreds more injured in a series of coordinated terrorist attacks by ISIS throughout Paris.

The attacks in Paris hit home for St. John’s, which has its own campus three miles away from the theatre.

In a statement released on Monday, the University said, “We are grateful that all St. John’s students, faculty, administrators and staff members associated with our Paris campus are accounted for and safe. Please know that the entire SJU team—in Paris and NYC—is dedicated to ensuring their continued safety and well-being.”

Some Discover the World (DTW) students on the St. John’s Paris campus were heading off-campus when they were stopped and ordered to stay in the building, according to two students.

“A group of us were on our way to the Eiffel Tower when the front desk and RA stopped us from going out after the first attack,” junior Desiree Avila said in an email from Paris. “A group was walking in from the Eiffel Tower.”

The release stated that the neighborhood around the Paris campus is functioning “in a relatively normal way” on Monday, less than 72 hours after the attacks. Classes were held as normal on Monday.

Meanwhile on the Queens campus, students attending the vigil were reminded on the  significance of a candle, especially during tragic times.

“It brings guidance to the darkness, which is currently where we find ourselves,” Cantoral said to students “Our candles signify the start of inspiration and guidance.”

A poster was provided for students to write any prayer intentions and messages, and Residence Minister for Leadership Rob Cote announced that Campus Ministry would host Prayer Services every Monday.

The University said they would evaluate all possible off-campus activities on the Paris campus to make sure they are “in-line with the guidance from the local authorities. The statement also said the University is working to collaborate with other universities with study abroad programs to ensure they are doing everything possible to support students.

In the meantime, the University is continuing to monitor the situation and following information provided by the U.S. Department of State as well as the U.S. Embassy in Paris, the French government and major news sources.