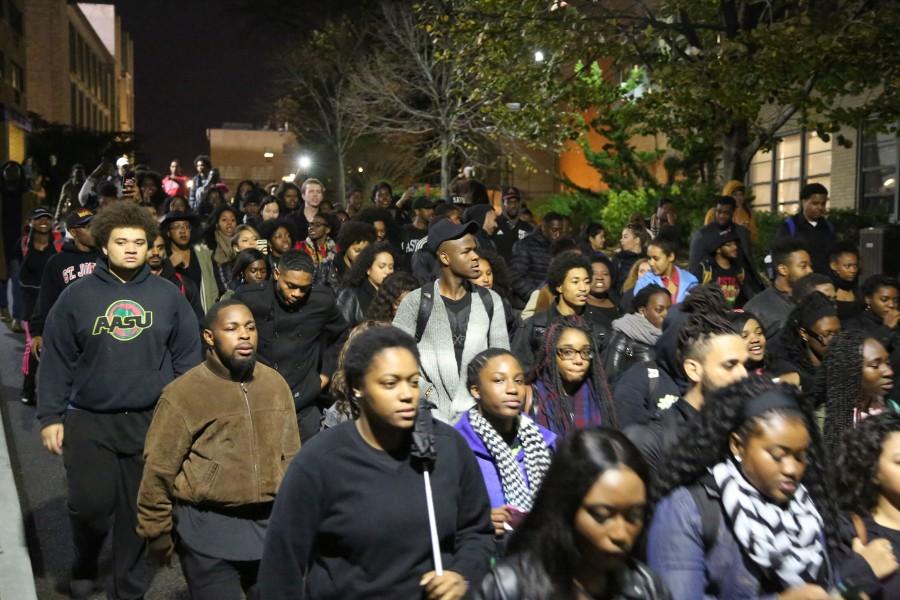 St. John's students march throughout the Queens campus on Nov. 12.

Chanting “SJU stands with Mizzou,” more than 100 students marched throughout campus in the evening hours on Nov. 12 in support of the student-driven protests at the University of Missouri.

In a grassroots effort organized by a number of St. John’s student leaders from various organizations, students gathered in front of the D’Angelo Center at 6:30 p.m. before walking past Montgoris Dining Hall and throughout the Residence Village before ending the demonstration at St. Augustine Hall.

Buck, alongside senior Anscia Brown and junior Kevante Williams, delivered an introduction that gave a back story to the march’s purpose. From the resignation of past University of Missouri president Timothy Wolfe to the ongoing threats occurring on Mizzou’s campus, each speaker highlighted reasons for activism.

According to Buck and Williams, the demonstration was planned in just two days in response to the growing perils on the Mizzou campus.

“There was a feeling among many leaders on campus to stand with students at the University of Missouri, especially after we heard that there were threats to kill black students,” Buck told the Torch.

Representatives from more than 10 organizations participated in preparing for the St. John’s march.

“It wasn’t really much about the collaboration, because all we wanted was to become united,” Williams said. “We were just united students.”

Buck urged the St. John’s community to take further action in educating students on dominant cultures and their effects on marginalized groups, and noted that although the University provides a sociology course focusing on inequality with race, class and gender, more response is needed. He also anticipates that professors will enroll in courses focusing on these topics before allowing eligibility for tenure status.

“We cannot boast to be one of the most diverse universities in this nation and not supplement that diversity with essential education,” he said.

Brown, who spoke at the march, agreed with Buck’s statements during an interview with the Torch.

“I think there needs to be more educational platforms that are mandatory for everybody that attends St. John’s,” she said. “Something similar to AlcoholEdu, but more of a structure where you sit down and can have these conversations face-to-face.”

At the march, students were encouraged to speak and present in front of St. Augustine Hall. For Senior Maurisa Fraser, that meant performing her two-minute poem, ‘This,’ which emphasized the beauty of black skin and her experience as a black woman.

“‘This’ sheds light on this idea that blackness is not something you can remove,” Fraser said. “It was a mini synopsis of my experience as a black woman at St. John’s, in higher education and a part of society.”

Senior A.J. Watkins spoke on racism as an international conflict, and how society should learn to love, not hate.

“I urged them to not allow everything that has happened to cause hate to settle in their hearts because it is very easy for that to happen,” he said. “We must operate in love to bring about change.”

Editors note: In the print Nov. 18 version of the Torch, the pull-quote stated an opinion on our Ebola brief story. The pull-quote for ‘SJU Stands with Mizzou’ was supposed to instead quote Xavier Buck’s statement, “For all the people who thought about how exciting it would be to fight in the 1960s, this is your time right now.”