A lack of interest in the arts leaves students stranded 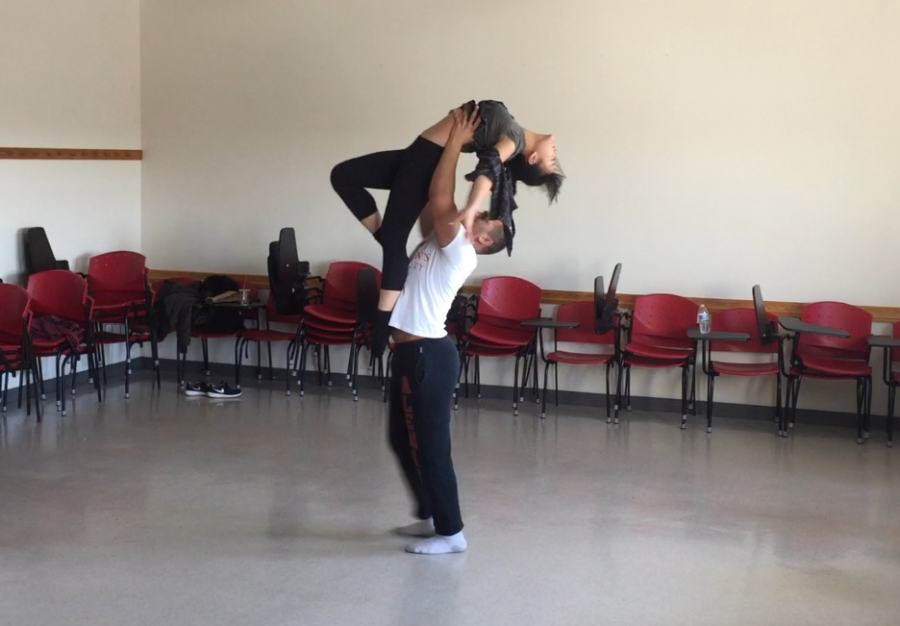 Students AJ Watkins and Sylvia Teng rehearsing in Marrillac classroom for Dance Concerts on April 22 and 23.

Preparations for the 2016 Dance Concert are underway as performers continue to practice their routines and attempt to publicize their event. However, some of the students involved believe the University doesn’t pay enough attention to the needs of performing arts groups. Others in performing arts believe a lack of general interest leads to this perception.

Many students say that there seems to be a decrease in the amount of space allocated for use by students in the performing arts.

Currently, students have the option of using the Little Theatre and Marillac Auditorium. Due to the amount of dances and number of performers, this space does not cover the needs of all students.

For the most part, performing arts students have been forced to look for empty classrooms around campus in order to practice.

“Every year there has been a decrease in space for performing arts students to use,” said junior and Assistant Director of Dance Concert, Mikki Ewing. “Trying to dance in classrooms causes a nuisance to professors and surrounding classes.”

Previously, the multi-purpose room in Carnesecca Arena was available to them. Recently, however, it has been renovated for the exclusive use of the golf team, as shown in a post on the Red Storm Athletics Instagram page.

In response to the students’ complaints, Dr. James Salnave, associate dean for Student Development, said space is at a premium. That creates logistical and planning issues for every group involved.

“Space is a concern not only for the Performing Arts groups, but also with the students organizations and offices/departments as well,” Salnave said. “In order to accommodate all of these competing initiatives, collaboration and proper planning is needed.”

Added Salnave, “A committee of faculty members and administrators is working on creating a stronger Performing/Fine Arts program on campus. This group is looking at all areas that need to be addressed that will work on enhancing the overall experience of  students.”

When attempting to use the Little Theatre or Marillac Auditorium, performing arts students say they must book the venues well in advance in order to reserve the space.

According to Salnave, the need for rooms has increased over the years as the number of performing arts groups and members have grown.

Demand for these locations is so high that students in performing arts aren’t able to use these spaces as needed.

“We recognize the need for more spaces to accommodate the needs and interests of the groups and flexibility is paramount to the success of all programs and activities,” Salnave said.

That’s welcomed news to performing arts students in need of a place to rehearse.

“We go to the office of Student Operations in DAC and ask Fran Goldberg what space is available for use and she’ll help us find a space,” said Chappell Players’ President Ryan DeForeest. “We can ask for the theater but nine times out of 10, it’s already booked.”

Despite the University’s efforts, some students still feel that the school remains ignorant regarding these issues.

“I don’t think they know that taking away our spaces has such a big effect on us,” said sophomore Sydney Holts, a member of Chappell Players Theatre Group.

Some say it hasn’t always been this way.

“During my first year, we were allowed to stay in the Little Theater as long as we wanted to, but now it’s more restrictive. We’ve been kicked out by 10 p.m.,” said alumna Jaclyn Saladino, a dancer in Dance Concert.

Others believe that the school does encourage the arts.

“I feel like we do have the support, especially since the president comes to see us, but we do need the space to practice,” said graduate student Ben Kistinger, who is currently choreographing a dance for the concert.

“They might not think that the multi-purpose room is important to us,” added Kistinger, “But we do need the space.”

“The University has always supported the arts,” said Chair of Mass Communications and professor of Dramatic Arts Richard Thomas. “But there are two main problems. First, there is limited access to space and second, there is a lack of student interest and if you have a lack of interest, no one is going to care.”

According to Thomas, the lack of interest does not come from performers or people involved in the arts themselves but rather the audience that these performing arts groups cater to.

Adding to the issue is the fact that to some, publicity for performing arts groups has been seen as inadequate. For example, the Chappell Players’ Theatre Group hasn’t seen many sold-out shows.

“Publicity is hard, but we do post flyers, send emails, pass out cards and publicize on MYSJU, so we do get the word out,” said DeForeest.

“I think that the advertising ideas are there, we just need a better way of executing them. Sometimes flyers just aren’t enough to let people know what’s going on,” said sophomore and Assistant Director of the Dance Concert, Marissa Nuñez.

In response to the attitude that the University overlooks the students’ needs, the problem returns the focus to the students.

“I believe that if the University sees a renewed interest and seeing more students become involved in all aspects, they’re going to notice it,” said Thomas.

“We need to do more to promote the arts,” he added. “They add immense value to the school.”