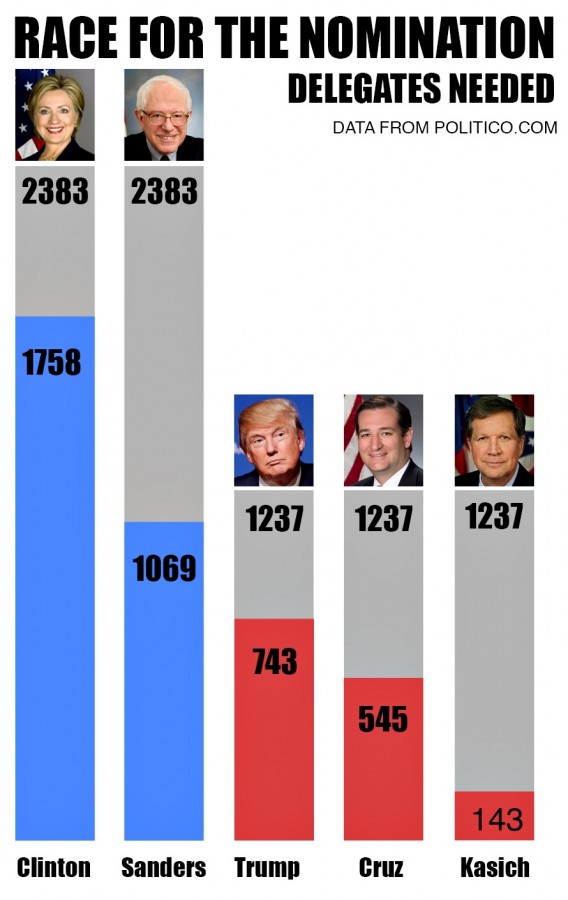 Midway through this highly unusual election, presidential primaries are continuing all around the country.

With the next primary taking place on Tuesday, April 19 in New York, the remaining five presidential candidates take their campaign tours around the state.

The primaries are expected to continue until mid-June.

There are two Democratic candidates, Bernie Sanders and Hillary Clinton, and three Republican candidates, Donald Trump, Ted Cruz and John Kasich, remaining in the race for the presidency.

In the past couple of months, voters have had a chance to watch debates and witness the ups and downs of the election process.

Currently, Trump is the front-runner in the Republican primaries followed Cruz, and Kasich. On the Democratic side, Clinton leads with Sanders slightly behind.

However, Cruz and Sanders both won their last three primaries. Cruz won Utah, Wisconsin and Wyoming with over half of the delegate votes.

Similarly, Sanders won Utah, Wisconsin and Wyoming with a little more than half the delegate votes.

Brooklyn is home to Clinton’s headquarters’ and one of Bernie Sanders’ field offices. On April 9, Sanders held rallies at Washington Heights in Manhattan, University Heights in the Bronx and Long Island City in Queens, according to the Gothamist.

According to CBS news, Sanders will be hosting a rally on April 13 in Washington Square Park. The rally’s Facebook Page states that the event will begin at 6 p.m.

In addition to the Democrats making an appearance, some of the Republican candidates’ have also kicked off their New York campaign tours, such as Donald Trump.

The New York native held a rally in Albany on April 11, where numerous protestesters were kicked out for chanting during his speech.

On the other hand, Cruz’s stop in the Bronx did not go well for him, as he was met by protesters and had to cancel an event because students organized themselves to walk out of his speech.

The presidential nominating conventions will be held at the end of July. With several primary elections remaining, there is still time for polls to shift.